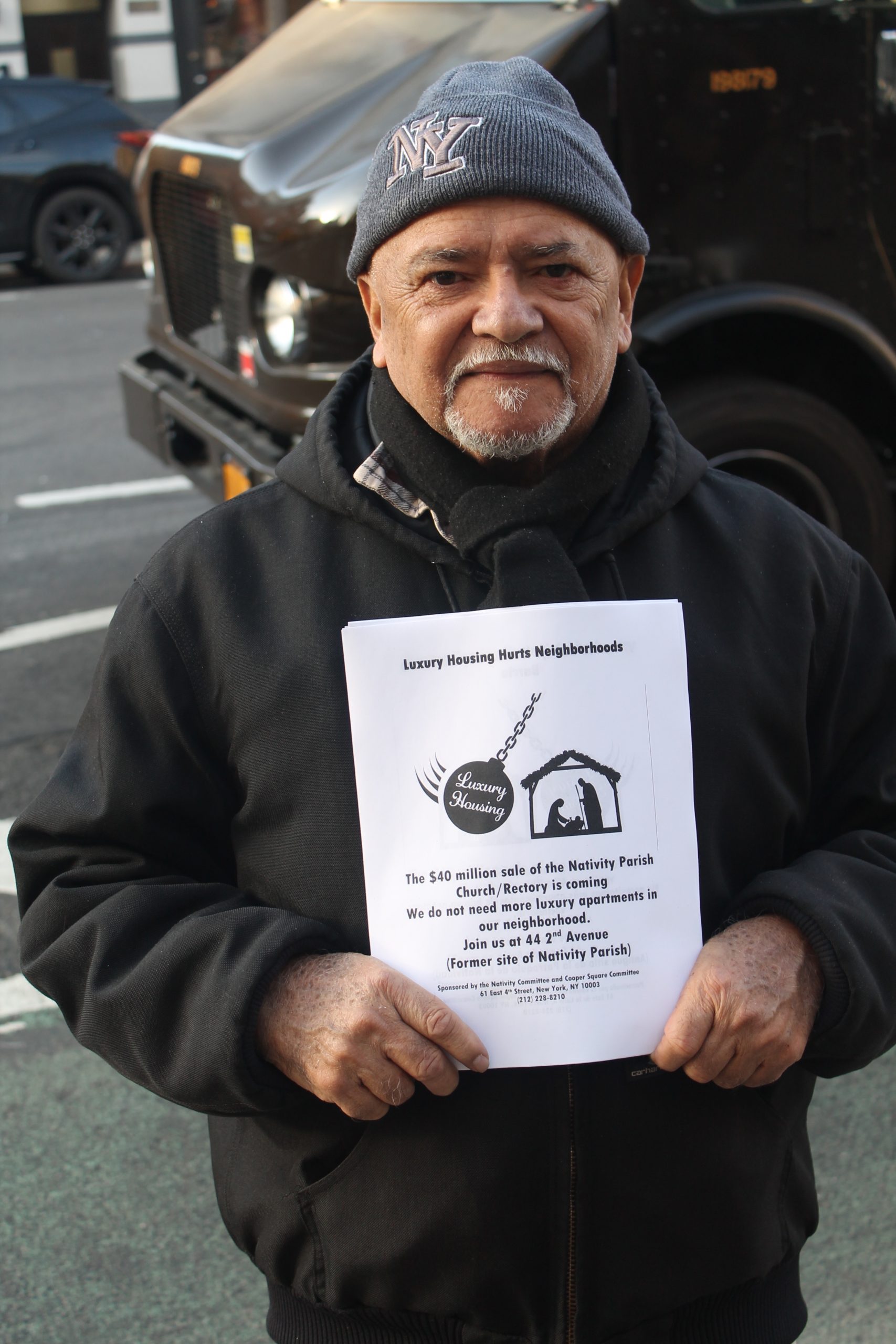 William Arroyo, who lives in the Cooper Square Mutual Housing Association, at a rally for affordable housing outside the closed Church of the Nativity in January. (Photo by The Village Sun)

No room at the inn: Housing at Nativity Church site won’t have affordable units

BY THE VILLAGE SUN | Updated Thurs., Sept. 3, 12 p.m.: Permits were filed on Aug. 31 for a new 11-story building on the site of the vacant Church of the Nativity, on Second Ave. between Second and Third Sts.

The site assembled by the developer also includes the adjacent former Annex building of La Salle Academy on the corner of Second St.

According to the application filed with the Department of Buildings, there will be no low income housing built either within the project or at any off-site location.

The mixed-use building is planned at 120 feet tall. It would contain 136,554 square feet, with 90,599 square feet designated for residential space — 87 condo units with an average of more than 1,000 square feet per unit — and 10,109 square feet for commercial space, plus 18 enclosed parking spaces.

According to a brief blurb in YIMBY, Gemini Rosemont, under Second and Second Property LLC, is listed as the owner behind the applications.

The La Salle Annex, at 38 Second Ave., was purchased in July by Second and Second for $14.5 million, according to Catholic New York. The Annex property offers 17,415 buildable square feet.

La Salle Academy’s former school building and brothers’ residence on Second St. is being leased by Nord Anglia International School until at least 2025 and was not included with the Annex sale. La Salle Academy currently occupies the top three floors of St. George’s Ukrainian School, on Sixth St. off of Second Ave.

Valerio Orselli, Nativity Project coordinator for the Cooper Square Committee, said he was “appalled” that the plans on file include no affordable housing.

“All market rate,” he said. “Also, the purchaser seems to have connections to the Chinese government. I am of course appalled by the cardinal’s utter disregard for the wishes and best interests of the Lower East Side community and the political leadership that represents us.

“We are still pursuing a meeting with the cardinal, since other properties owned by the Archdiocese are coming up for sale.”

In January, housing activists and parishioners rallied outside the Nativity site, beseeching the New York Archdiocese to consider their alternative plan to redevelop the site with 120 units of low- and moderate-income housing.

As part of their efforts, the Nativity activists even sent a delegation to the Vatican to meet with Church officials.

The decommissioned church and its two nearby Catholic Worker hospitality houses were the base of legendary activist Dorothy Day, who is being considered for sainthood. The Catholic Worker movement focuses on social justice and helping those living on the margins, and is also known for its newspaper.

“We’re doing this because Dorothy Day started the Catholic Worker here and she worshiped here and she’s up for canonization,” local resident William Arroyo, 75, told The Village Sun at the January rally.

The Archdiocese’s real estate division reviewed but declined the neighborhood-led proposal for the Nativity site.

C.B. 3 subsequently adopted two resolutions opposing the Church of Nativity’s sale to market-rate developers and requesting a meeting with Dolan to discuss alternatives.

Also, earlier this year, bringing more focus to bear on the issue, Borough President Gale Brewer convened a Religious Facilities Task Force to look into houses of worship and development.

Despite the pleas of the community, however, the Archdiocese showed no signs of diverging from its plan for market-rate housing at the site.

On Feb. 20, right before the coronavirus pandemic hit, local politicians and activists wrote to Cardinal Dolan, saying they were “perplexed” that the Church of the Nativity site was being slated for luxury housing.

“We write to express our concern with the Archdiocese of New York’s closure and disposition of its properties in Manhattan Community District 3 and to request a meeting in the interest of including community perspectives during this ongoing process,” the letter stated.

“We applaud the essential role the Catholic Church has been playing in addressing the challenges of homelessness and housing insecurity,” the letter continued. “However, our communities are perplexed when they learn of plans to build luxury residences on sites that were home to devoted, moderate-income congregations, such as the recent announcement regarding the Church of the Nativity site.

“Additionally, plans for the St. Emeric Church and St. Brigid School sites have not been conveyed directly to the community,” the letter added.

Six months later, there still has been no response from Dolan to their request for a meeting about the redevelopment of the Nativity site.