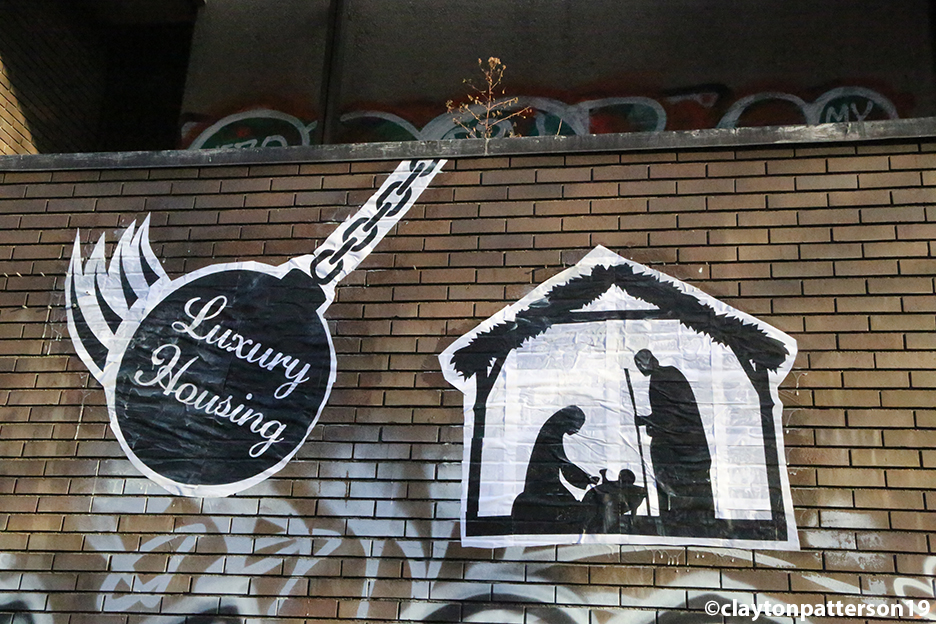 Praying for a housing miracle at former East Village church

BY LINCOLN ANDERSON | Hoping for a miracle — praying that a vacant East Village church won’t become yet more luxury condos — housing activists and parishioners rallied outside the Church of Nativity last Friday afternoon.

The Archdiocese of New York is reportedly in the process of selling the Church of the Nativity, on Second Ave. between Second and Third Sts., according to the demonstration’s organizers, the Nativity Committee and the Cooper Square Committee.

“The information we have gotten from several sources — Community Board 3, the Manhattan Borough President’s Office and Councilmember Carlina Rivera’s Office — is that the archdiocese has signed a sale agreement for $40 million with a developer for the Nativity Church site,” said Valerio Orselli, Nativity Project coordinator for the Cooper Square Committee. “We don’t yet know who the developer is because we also have been told that the developer insisted on a nondisclosure agreement until the sale is finalized, presumably due to the controversy.”

The housing advocates say that they have a plan to redevelop the site with 120 units of low- and moderate-income housing.

“The Catholic Archdiocese wants to sell it for market-rate housing,” said William Arroyo, 75. “We offered them $18 million.”

The activists also sent a delegation to the Vatican to try to appeal directly to the pope. They reportedly did meet with Church officials, though not with the Roman bishop himself, and it apparently did not influence the New York Archdiocese’s decision.

“We’re doing this because Dorothy Day started the Catholic Worker here and she worshiped here and she’s up for canonization,” Arroyo added.

The church and its two nearby Catholic Worker hospitality houses were the base of activist Dorothy Day. The Catholic Worker movement focuses on social justice and helping those living on the margins, and is also known for its newspaper.

Arroyo lives in an affordable apartment in the Cooper Square Mutual Housing Association.

“I wouldn’t be able to live down here [otherwise],” he noted.

Jean Standish, of the Bowery Alliance of Neighbors, or BAN, said the church property should be landmarked, not necessarily for its architecture, but based on its historical significance.

“There are various ways you can landmark a building,” she said. “Dorothy Day used to worship here.”

In addition to having services, the Church of the Nativity also used to have a Saturday soup kitchen and also an Alcoholics Anonymous meeting, of which someone at the rally noted, “in this neighborhood, it’s important.”

Showing how “hot” the neighborhood is, just a block to the south, a new 10-story residential building on the former BP gas station site boasts apartments selling for from $1.1 million to $10.5 million.

According to StreetEasy, the median sale price for an apartment in the East Village is currently $2.1 million and the median rent is $3,900.

Per statistics from the rally’s organizers, between 2010 and 2017, the district’s median rent rose 20 percent, yet during that same period, the area’s median income dropped nearly 7 percent.

Meanwhile, more than 30 new luxury buildings have been constructed or planned in the district since 2014. But in the last two decades, the East Village and Lower East Side have lost more than 7,000 rent-regulated units, according to the event’s organizers.

Joanne Kennedy, whose family was part of the church and is part of the Catholic Worker community, explained that Nativity and the nearby Church of the Most Holy Redeemer, a couple of blocks away on E. Third St., are in the same parish.

The parish has a large debt of up to $11 million and the parish trustees were asking for it to be paid off. Nativity was merged into Holy Redeemer a few years ago and downgraded to a “mission church,” then was decommissioned.

Of the activists’ proposal, Kennedy said the archdiocese “didn’t take the plan seriously.”

Kennedy said the site is zoned to allow “a pretty tall building,” so the developers probably would not need to get a zoning variance.

But whatever happens with Nativity, there will still be plenty more work to do, Kennedy noted.

“We’re taking the long view,” she said. “There’s a lot of church-owned property in this neighborhood.”

It wasn’t long ago, for example, that Mary Help of Christians property, on Avenue A between 11th and 12th Sts., was demolished for a new apartment building dubbed The Steiner.

“Luxury condos harm our community,” Orselli declared, adding, “The struggle is not over. The struggle continues.”

The veteran housing activist was encouraged that Borough President Gale Brewer is showing support for the idea of not developing houses of worship into market-rate housing. Her Religious Facilities Task Force was set to hold a meeting on the issue on Tues., Jan. 14, at Harlem Hospital.

The Archdiocese of New York did not immediately respond to requests for comment for this article.

Also attending the rally were a group of students from the Dorothy Day Center for Faith and Justice at Xavier University in Cincinnati. Luke Hansen, a Jesuit chaplain at the center, explained that they had been on an “economic and racial justice tour” in New York City. Among the places they visited were the spot on Staten Island where Eric Garner died while being arrested by police, as well as Manhattan Criminal Court.

The Church of the Nativity rally was the last stop on the Xavier group’s tour. They had also been helping serve meals at Maryhouse and St. Joseph’s House, the two Catholic Worker hospitality residences nearby. Earlier, they had taken in the East Village.

“We did a walking tour of this neighborhood, which really got the students excited,” Hansen said. Becky Amato, a New York University professor, had led them around, teaching them about gentrification.

Tito Delgado, an original site tenant of the Seward Park Urban Renewal Area, was also among those calling for the Nativity property to be developed as affordable housing. Delgado, 68, along with other original SPURA tenants, succeeded in getting affordable units in one of the new buildings at the long-contested Lower East Side location. But it was a decades-long struggle.

“We got affordability in perpetuity, and the fight continues,” he said of the Nativity campaign.

Asked if he felt the same results could be achieved at the Second Ave. church site, he said, “If you don’t put up the fight, you never know. We didn’t think we could win SPURA — but you got to fight.

“I think it’s ethnic cleansing,” Delgado added, of the neighborhood’s gentrification. “I was brought up in the Catholic Church and I was always told the Church was about helping poor people. But the Church is going for money. That’s not the teaching of Jesus.”

By pushing out low-income people, the Church is ultimately hurting its own cause, he charged. But if the Church followed the advocates affordable-housing plan, they would get more congregants, he assured.

“Who supports the churches?” he asked. “It’s not the hipsters. It’s the immigrants, it’s the poor people.”

At the rally’s end, a guitarist belted out Woody Guthrie’s “This Land Is Your Land” while the Xavier students served hot cider and cookies to the crowd.

“It’s disheartening,” said Grace Mazza, 21, one of the students. “It makes me sad as a Catholic.”

On the positive side, Victorian Smith, 20, said approvingly that the East Village is “a strong community.”

“It’s kind of inspiring,” she said.