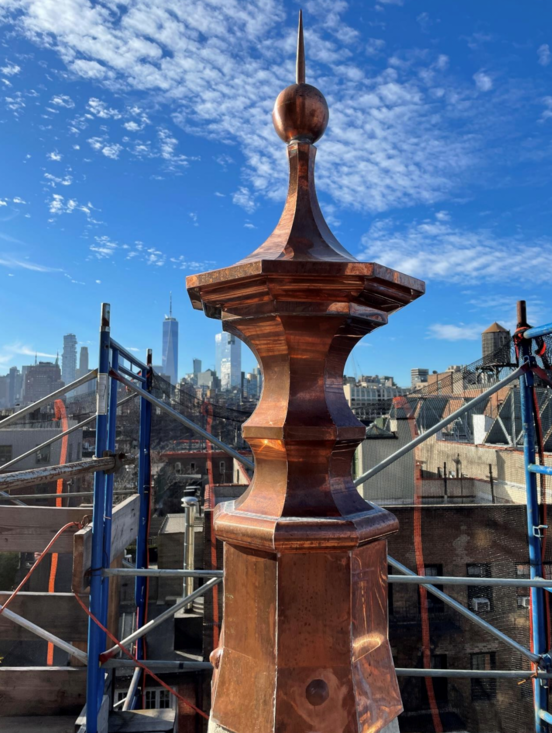 BY THE VILLAGE SUN | Finially…er, finally!

After more than two years of painstaking restoration work, on Jan. 17, the scaffolding will be dismantled from the historic former Washington Square Methodist Episcopal Church to reveal a beautifully restored marble edifice.

Although the erstwhile United Methodist house of worship, at 135 W. Fourth St., was converted to condominiums in 2006, the renovation did little for the building’s front exterior. In fact, it’s believed that the facade may not have been restored since its original 1860 construction more than 160 years ago.

The job also included the addition of four new, distinctive copper finials to replace the ones that had been removed from the church spires sometime between 1939 and 1983, according to historical records.

Novare board members reviewed New York City Landmarks Preservation Commission records for Greenwich Village to exactly match and reflect the design of the finials that were originally installed in the mid-19th century.

Although the finials were never replaced until now, according to Raul Mayta, principal of Mayta & Sebastian Architecture, it’s not so unusual that they were taken off in the first place.

“The original finials were likely removed due to their extreme deterioration, and if they were removed in the period between 1939 and 1983, they may have been almost 80 to 120 years old,” he said. “The finials and the spires are completely exposed to the severe New York City weather elements, so their useful life of close to 100 years is impressive.”

As for the project’s budget, the condo board is not making it public.

Also part of the former house of worship’s church’s history, it became known as the “Peace Church” due to the congregation’s opposition to the Vietnam War. It was also a hotbed of early gay activism as a meeting spot of the Gay Liberation Front.

The residential conversion in 2006 resulted in eight condo apartments. The two penthouses sport the church’s original, exposed ceiling beams, as well as two floors of the original stained-glass windows dating back to 1860. The residences on the second and third floors also have the original stained glass along their hallways.

One of the condo owners, Brian Maloney, the founder and C.E.O. of CUSP NYC, an art dealer and appraiser, said they were all proud of the restoration work on the landmarked building.

“I believe I speak for all of the owners here,” he said, “that we believe it’s an honor and privilege to live in such a beautiful and historic building, and it’s important to all of us that its architectural and historical integrity is maintained. Really special place.”