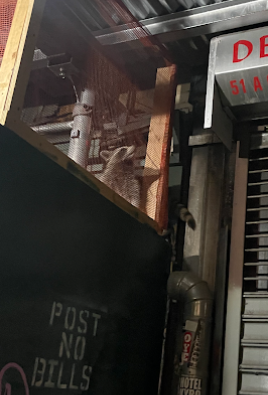 Look closely. That’s a raccoon on the Lower East Side on Ludlow St.

Trigger, the former owner of the Continental, the punk rock music club-turned-cheap shots bar at St. Mark’s Place and Third Ave., spotted the critter Monday night on Ludlow St. between Grand and Hester.

“I thought it was a cat and was gonna try to rescue it until I saw those eyes,” he said. “That’s his tail to the right. He was a big mutha.

“I saw him scooting under a car and then on the sidewalk and then it climbed up a storefront. His home seemed to be a construction site. He probably went into some garbage cans for food.

“He was big and husky,” Trigger said. “Must be eating well. He climbed up that storefront gate like a champ. I’ve never in my whole life seen a raccoon in Manhattan before!”