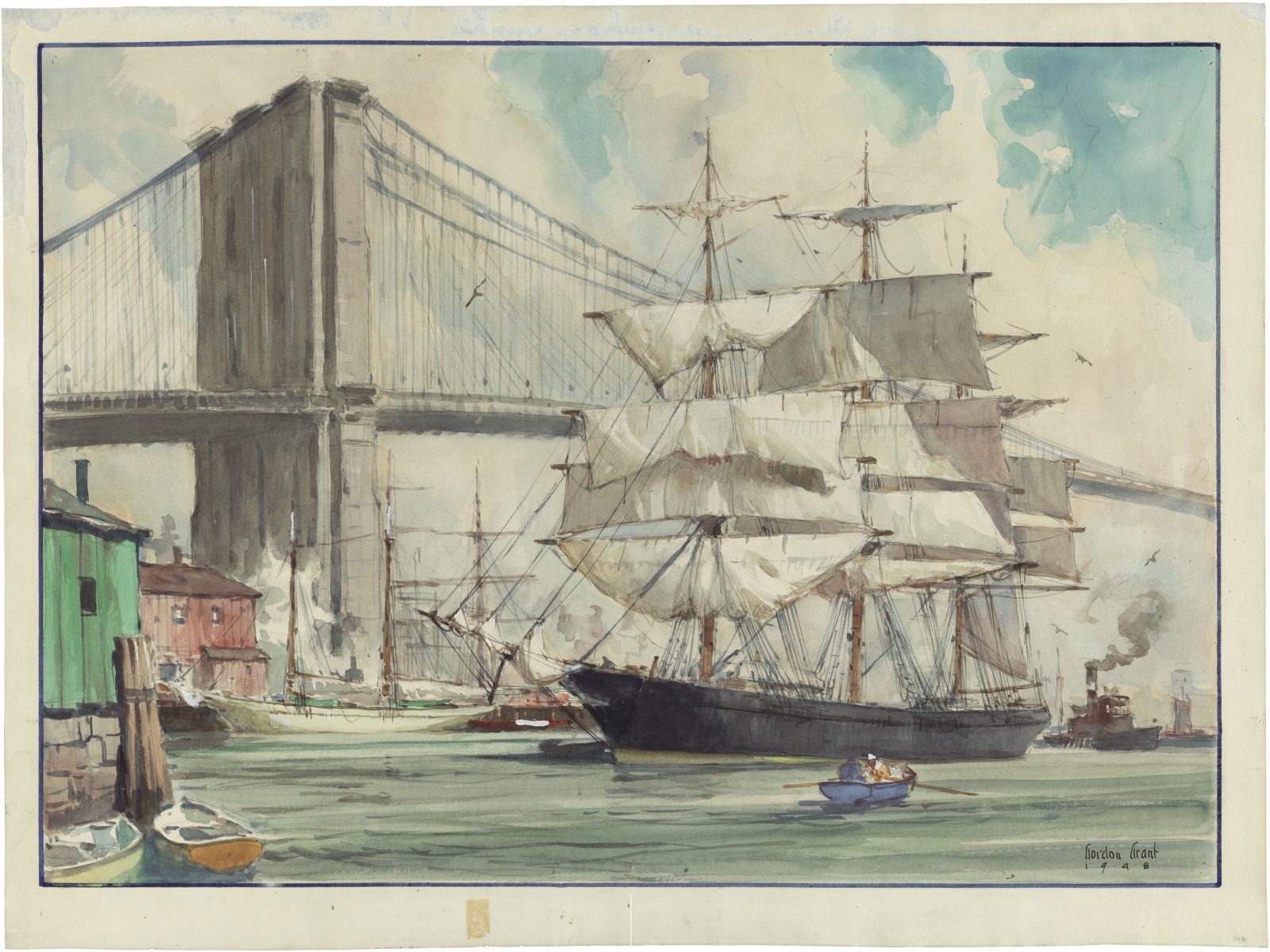 "Great Admiral," a 1948 watercolor painting by renowned maritime artist Gordon Grant, is among the paintings and drawings at the South Street Seaport Museum. (Seamen's Bank for Savings Collection)

An (actually) real history of the South Street Seaport Museum

BY CAPTAIN JONATHAN BOULWARE | We read the Seaport Coalition’s recent talking point in The Village Sun (“The real story: The Seaport Historic District, South Street Seaport Museum and the Howard Hughes mega-proposal”) about the project at 250 Water St. with some dismay; reasonable people can disagree on the proposals for 250 Water St., but the factual history of the Seaport Museum — and the historic district it made possible — speak for themselves.

How can there be a fair and clear land-use process if errors are allowed to run rampant? We felt that this necessitated setting the record straight.

How did the South Street Seaport Museum get into this precarious position?

First, some history: When the Seaport Museum was formed in 1967, it saved the Seaport, specifically its buildings, many of which had fallen into disrepair. The historic district was designated a decade later, with the museum as its champion and official “unassisted sponsor.”

The historic district was created with an intended interrelationship: the sales of air rights were always supposed to go to support the museum, so that it could perform its historical and educational mission, including caring for and programming the historic buildings.

Numerous attempts (air-rights transfer in 1972, Rouse deal in 1981, and several other major interventions by the city) all ratify this central premise. And though these various attempts never managed to produce a dollar for the museum, it has persevered nonetheless. Indeed, with vigorous fundraising, broad volunteerism and creative entrepreneurship, the museum has funded itself and been a programmatic leader both here in New York and internationally.

Our lack of a stabilizing endowment, though, has meant we have always been just one step ahead of financial calamity. The Seaport Museum stewards some of the most expensive-to-maintain properties in the city — some of Gotham’s oldest buildings, and historic ships that live in saltwater exposed to sun, rain, freeze and thaw. Without an endowment, these capital obligations have always been a precious but heavy burden.

The past 20 years have made it worse. Both 9/11 and the financial collapse of 2008 cooled our district to tourists for a decade in a one-two punch; Hurricane Sandy buried our institution in water and river silt. Our escalators still don’t work from the impact of the superstorm. Now COVID has put us in a more precarious position still, shrinking our staff from 100 to just 18, and cutting our operating budget in half.

With key funding sunsetting next year, we have under 18 months before the museum is finally completely financially nonviable and has to permanently close its doors.

What’s in the 250 Water St. project for the Seaport Museum? Simple: long-term stability. Specifically, the funding that was planned to come from projects just like this one when the museum and district were founded.

Stable museums rely on a diverse portfolio of funding, typically grouped into earned income, contributed income and interest income. The last category, interest from invested endowment funds, is what separates financially sustainable institutions from those living hand to mouth. It’s likely that there will be a high correlation between institutions that have endowments and those that survive the current COVID crisis.

But what about the new building? Isn’t that a priority?

The Seaport Museum does intend to expand; the proposed building at John St. has been a museum plan for decades. But financial stability must come first. To grow before being stable is to invite collapse later. We’ve seen this play out across several cultural institutions in New York in recent memory. The museum is prioritizing the endowment over a new building, not the developer. It’s sound financial thinking and the only responsible way forward.

Does the South Street Seaport Museum really have access to $12 million dollars from FEMA?

Yes. More specifically, the museum is eligible for reimbursement for up to 90 percent of the $12.4 million FEMA 428 disaster-assistance grant awarded in 2015. These funds will of course not be available for running the museum; they are to repair damage from Hurricane Sandy. As we write this, an R.F.Q. (request for quote) is being finalized that will allow that work to proceed.

Numerous obstacles have stood in the way of this work occurring, and we will still need to identify $1.25 million (the 10 percent that won’t be reimbursed) in order to make it work. An investment from Howard Hughes Corporation would unlock these funds immediately.

So what’s the bottom line here?

It comes down to this: Nobody disagrees that the Seaport Museum needs major support to remain the beating heart of the district, telling the story of our city on the sea and preserving our neighborhood’s — and our city’s — history for generations of New Yorkers and visitors. And our district needs our museum. The 18th- and 19th-century buildings of the South Street Seaport Historic District exist today because the South Street Seaport Museum exists. And their long-term future as anything other than a shopping destination, in other words as a real Seaport, relies entirely on a strong Seaport Museum.

This is the best, most real opportunity we have to get the support we need, and it is entirely consistent with the founding principles of the museum, the district and its accompanying urban renewal plan. Indeed, the museum’s own master plan of the late 1960s identified tall buildings on 250 Water St. as one of the key projects that would generate funding.

Opponents claim that we could simply make another arrangement (like financing from the city’s Economic Development Corporation) appear. We’d love their help in doing that.

Another narrative suggests that transferring development rights elsewhere can generate funding for the museum, but so far there’s no real, actionable plan.

There is, however, a history of trying this in our district: The air rights transferred in 1972 were only finally used up recently. If we modeled our plan after that example, the museum could at best hope for dribs and drabs of funding, delivered over decades. It wouldn’t solve the fundamental crisis the museum faces; we have less than 18 months. The clock is ticking, and we have been advertising our financial needs to anyone who would listen for a very long time without “another arrangement” ever coming through.

Let’s not prioritize a parking lot over preserving the very real history of our district. And let’s not let alternative facts ruin our valid community discourse.