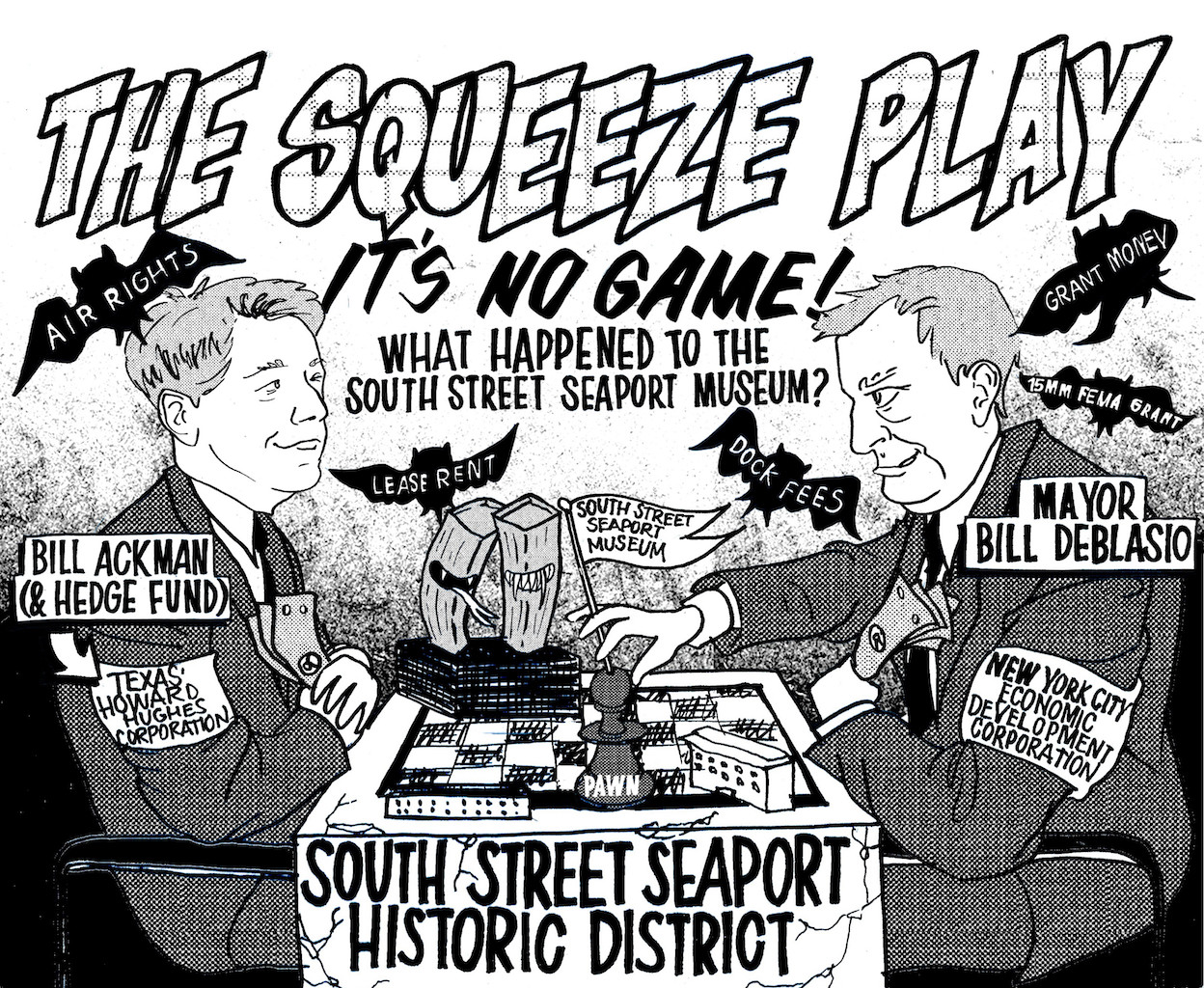 BY THE SEAPORT COALITION |

The South Street Seaport Museum, its collections and historic ships, has had to be rescued from financial ruin many times in the past. Unlike some other museums, the city has charged the South Street Seaport Museum rent on the city-owned site and has slowly taken away the museum’s permanent revenue stream; all this even though the museum was set up as the guardian of the Seaport Historic District, its ships and its 18th- and 19th-century buildings.

The fix is in

In 2013, the Economic Development Corporation (essentially, the mayor) and the Texas-based developer Howard Hughes Corporation, nearly 25 percent owned by billionaire Bill Ackman, revised the Seaport master lease and, in a secret backroom deal, stripped away monies from leases and dock fees originally intended to fund the museum, all without the museum being invited to the table.

After ruining the museum’s chances of survival, Howard Hughes is using it as a pawn, calling it the “Heart of the Seaport.” The developer now offers to “rescue” the ailing institution with $50 million — but only if it can shatter the historic district’s 120-foot zoning cap with a massive 345-foot-tall building at 250 Water St., setting a precedent repeatable within the Seaport and other historic districts throughout the city.

Hughes paid $180 million for the 250 Water St. site. To justify the price to its shareholders, it wants to erect a 345-foot-tall mega-building, despite the historic district zoning’s 120-foot cap and neighboring buildings that are only five stories tall.

What you see is NOT what you get

Hughes is NOT building a new museum on John St.; it’s ONLY paying for design and approvals. Convenient, since this is linked to approvals needed for the developer’s mega-tower project.

The help Hughes Corp. promises for the museum is not for renovations to the Schermerhorn building but ONLY for facade repairs, which is an existing obligation since 2013.

In Hughes’s plan presented to the Landmarks Preservation Commission, museum spaces will be downsized and unused public spaces given to Hughes to monetize.

Meanwhile, the museum has an unused $12.5-million Superstorm Sandy FEMA grant for reopening galleries and repairing elevators/escalators and HVAC to protect at-risk collections, yet has been shuttered since 2012.

Internal Hughes Corp. documents show the developer plans to flip the property pending city approvals. Hughes is not obligated to transfer any neighborhood amenities when it sells, and it has given no signed document of the “promised” gift of $50 million to the museum. Amenities promised during land-use negotiations disappear MANY times in deals all over the city, with elected officials powerless to stop it.

Now you see it, now you don’t

Hughes Corp. has a track record of lying to the community about amenities, including promised green public park space on Pier 17, a 10,000-square-foot Fulton Stall Market, another greenmarket and talk of saving the museum several times — none of which have materialized.

Hughes is already downsizing community benefits connected to the 250 Water St. project, including:

1.) a reduction in low-income housing from 160 down to 70 units, and not very affordable.

2.) a “gift” of outdoor space: a play street outside Peck Slip School — the public street the school already uses! Construction of the extra-tall development would shut the street down for years longer than if the Hughes project was built as of right under the current height cap.

Hughes could build today. The Seaport Coalition and Community Board 1 welcome construction of a project at the 120-foot, zoned-height limit. Instead, Hughes’s mega-building will take years longer to build — years of more noise, heavy machinery and exposure to toxic chemicals for nearby seniors and more than 1,000 schoolchildren.

The 250 Water St. site was found to contain extremely dangerous elemental mercury, lead-contaminated groundwater and oil storage tanks, to name a few. An estimated 1 million cubic feet of clean and dirty soil needs to be excavated (more than 3,700 truckloads) and carted away on busy Pearl St. near three schools.

The city, not Hughes Corp. owns air rights from the Tin Building / Pier 17. The Seaport Coalition has a viable plan for selling these publicly owned assets to a willing buyer for use outside the historic district, while the revenue would directly benefit the museum. Elected officials and the mayor have ignored this plan.

The South Street Seaport Historic District is on the National Trust for Historic Preservation’s list of 15 Most Endangered Districts in the U.S. Smashing the 120-foot zoning could open up the district to high-rise development and destroy the 19th-century low-scale neighborhood “where modern-day New York began.”