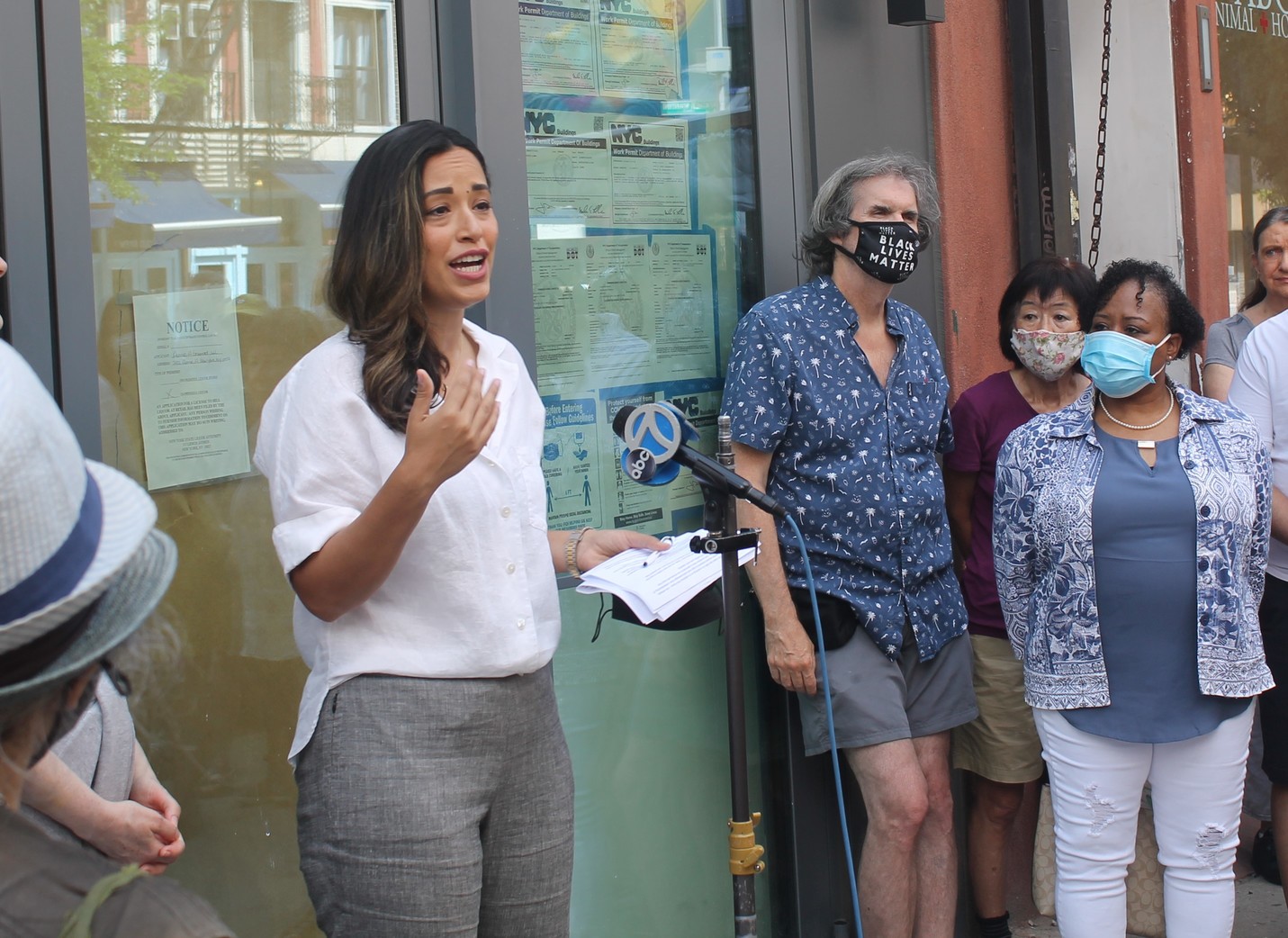 Councilmember Carlina River speaking at the press conference outside 202 Avenue A on Sun., May 23. (Photo by The Village Sun)

BY LINCOLN ANDERSON | Enough is enough!

Following the tragic death of a 24-year-old woman who fell from an Avenue A rooftop party early Saturday morning, local politicians and neighbors are calling for stepped-up agency enforcement on dangerous rooftop gatherings — and also for landlord accountability.

They gathered Sunday morning outside the site of the fatal accident, 202 Avenue A, between 13th and 12th Sts. The tenement was gut-rehabbed, enlarged and marketed last year as a swanky new residence, dubbed the Topanga (apparently named for the bohemian California town where Neil Young recorded “After the Gold Rush”).

Speakers declared that the neighborhood has been besieged by out-of-control rooftop parties. However, they said it hasn’t been a problem just since the pandemic, but has been going on for a number of years, especially as developers have been outfitting their buildings with rooftop party spaces to attract young, fun-loving tenants.

“We are all thinking about the family of the young person who lost their life on Saturday morning,” said Councilmember Carlina Rivera. “This tragedy shows just how dangerous overcrowded or mismanaged rooftop parties have become, and how often they have little to no safety protections or monitoring.”

Rivera has drafted two pieces of legislation to address the issue. The first one, Intro 1292, which has already been introduced in the City Council, would require tenants to sign and acknowledge their understanding of the city’s noise codes; the bill has a provision for landlords to be hit with $250 fines for violations. The second piece of legislation, planned to be introduced soon, would ensure that enforcement agencies have easier access to phone numbers of overnight building supers or contacts, as well as require better oversight of rooftop use and capacity — including putting occupancy caps on rooftops.

“We will continue to pursue my legislation to ensure agency responses so that these deadly situations do not happen again,” Rivera said. “But landlords are ultimately responsible for ensuring outdoor spaces are legally and safely accessible and are not used improperly. If you make the decision to buy a building, you are responsible for the lives of its residents. And these landlords are not living up to that responsibility.”

Assemblymember Harvey Epstein, a longtime East Villager, noted he has a 23-year-old daughter, around the same age as the victim.

“We’ve heard complaints from constituents regarding out-of-control rooftop parties, even before the start of the pandemic,” he said. “Unfortunately, a life was lost from one of these very events. I’m committed to ensuring we push state legislation and hearings to address this ongoing problem. The city and state need to take control of this situation before we lose more lives.”

State Senator Brad Hoylman called for a moment of silence for the victim and her family before delivering his remarks.

“It should not take a tragedy for us to take action on dangerous rooftop gatherings and, yet, a tragedy is exactly what happened right here,” he said. “How many more must occur before our enforcement agencies, landlords and some residents take responsibility? Ensuring that tenants understand noise codes and ensuring better oversight of rooftop capacity are essential steps as we work to prevent future tragedies like this weekend’s from happening again.”

Alysha Lewis-Coleman, the chairperson of Community Board 3, who noted she is also the parent of a young adult, said, “We have to stop all this partying on rooftops, and like Carlina said, it’s overcrowded, too many.”

Rivera and the politicians have described the party as having been “dangerously overcowded.” The New York Post reported a witness saying there were 20 people there. On Sunday, asked whether the party was overcrowded or not, Rivera said there is an ongoing investigation, but that “the trend” in the East Village has been for the rooftop parties to be overcrowded.

“We knew that this had to happen eventually,” said Susan Stetzer, the district manager of C.B. 3.

She and Rivera both mentioned the incident, exclusively reported in The Village Sun, of a young woman who fell off a rooftop on E. Third St. this past October but somehow remarkably survived the six-story plunge. That was a birthday party, though not overcrowded, but the group reportedly had been drinking.

“The new and renovated buildings are all built with rooftop amenities — that is about profit,” Stetzer said. “Councilmember Rivera and Community Board 3 have been getting complaints about this for years but it’s only gotten worse every year. This is not about the pandemic. First responders often can’t get access [to the buildings and rooftops]. The noise volume is clearly illegal. The neighborhood has developed a serious problem, with no consideration for neighbors.”

Neighbors, meanwhile, painted a picture of an aerial “Animal House” that has gone completely nuts.

Dale Goodson, a member of the North Avenue A Block Association, lives right across the street from 202 Avenue A. He said that ever since the renovated building opened in January, there have been loud rooftop parties, with drinking games, even in the middle of winter.

“In the middle of January, it’s 40 degrees out and there’s 15 people out there, yelling and partying,” he said. “They weren’t there for long, but they were there.

“This property has been an accident waiting to happen and now it’s happened,” he said. “If developers are going to use access to rooftop decks and backyards as selling points, they’ve got to take responsibility. Way before the pandemic this was an issue.”

He said the Topanga’s owner, Highpoint Realty, has two other buildings on E. 13th St. that have the same layout, with loud party decks, “so we get it from both sides.”

Goodson said the building next to his, 205 Avenue A, had been very noisy six ago, with parties with rooftop deejays, and that he and his neighbors had complained. They subsequently managed to see a copy of a lease for the building, and it did include a clause saying “no shouting or loud music,” which has helped.

But the perennial cycle — a new crop of young tenants move in, throw outrageous ragers, then possibly learn to be better neighbors before moving on — repeats over and over again, he explained.

“It’s always the same cycle when the next set of tenants come in,” he said. “The rent is high and then they move on. They’re in school, they’re starting new jobs. They’re here for a year or two and then gone.”

Frank Linkoff, who lives a block south on Avenue A, said the rooftop revelers will only chill out when the fines hit — not them but their parents.

“They’re not kids that are paying $12,000 [a month] for these apartments,” he said. “When they’re held responsible and when daddy and mommy have to pay fines, that’s when we’ll see change.”

He said he has seen partiers clamber from one rooftop to another just to take a piss.

Chris Ryan, the husband of City Council District 2 candidate Allie Ryan, said he has definitely caroused in the East Village in his day but that the rooftop scene is taking things to new heights, so to speak.

“I partied in this neighborhood for 20 years and I never went that crazy,” he said of the rooftop party animals.

He added that the Open Restaurants sheds out on the street are compounding the din, and have killed his family’s Friday movie nights at home.

“I can’t even open the window,” he said.

Allie Ryan said the roof of their E. 11th St. building was so damaged by revelers on the adjacent rooftop, who frequently threw things like empty liquor bottles and even lawn chairs onto it, that it had to be repaired.

“This has been an ongoing problem,” she said.

Another man, who did not want to give his name, said that when police show up outside, the rooftop partiers quiet down, only to crank things right back up to full volume after the cops leave.

“They live a life of impunity,” he seethed.

He shared a YouTube video with The Village Sun that he filmed, titled “Out of Control Party at 196 Avenue A and 501 + 505 12th St.,” which shows revelers whooping it up and scrambling between rooftops in October 2019, right near Saturday’s accident scene.

Visual artist Judith Fleishman said she’s been dealing with similar problems where she lives on E. Sixth St. between First and Second Aves. The building across the street from her has constant rooftop ragers.

“The parties start at 11 a.m. and go until 2 or 3 in the morning, Friday to Sunday,” she said. “It’s always blaring rap music or music, drinking, crazy. Yelling, talking, screaming. I’m across the street and I’m 70, I can’t sleep.”

The 44-year neighborhood resident, who lives on the top floor of her building, had a problem just two days earlier closer to home when she was awakened by the sound of footfalls overhead.

She found a group of several young guys on her rooftop and asked how they got there.

“They climbed over the roof — over David Schwimmer’s roof, who’s apparently not there — and when they got to 309 [E. Sixth St.], threw a bottle off the roof and said, ‘Thank you.’

Fleishman said, after the incident, she went to the Ninth Precinct to complain.

“I knew someone was going to die — for weeks,” she said.

“All over, millennials are having gaga at the go-go,” she said. “There’s a glut, a glut of kids. I think they’re in finance. They talk about how much money they make. I hear them when I’m watering the plants on the roof.

“I love going up to the roof,” she said. “Thirty people, cheek by jowl, until 3 in the morning — not so much.”