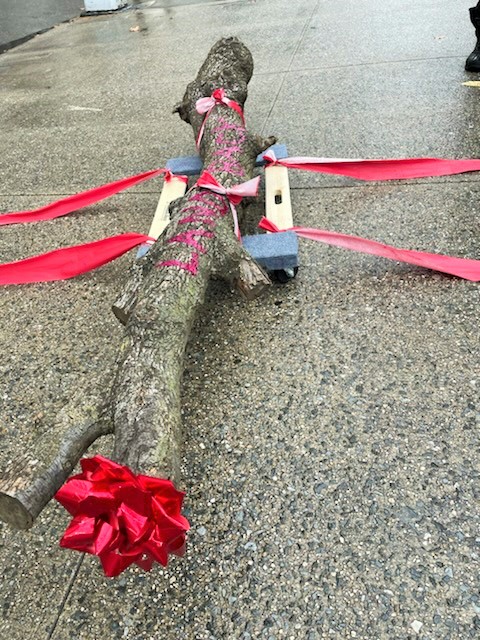 Not exactly a yule log: Activists opposed to the clear-cutting of East River Park for a coastal-resiliency project hauled part of a felled tree on a dolly to Carlina Rivera's home on Sat., Dec. 18.

BY LINCOLN ANDERSON | Two weekends ago, in a stunning sight, work crews toiling around the clock, feverishly cut down trees and ripped up pathways, benches and playing fields in East River Park. The city’s wild, all-out effort to destroy as much of the park as possible that weekend was presumably driven by a looming critical court decision expected as soon as that Monday.

This past weekend, though, crickets… . That is, if any insects in the park’s southern half survived the hard hats’ frantic, foliage-felling blitzkrieg.

That glaring disparity in itself would seem to put the lie to accusations by some that the opponents’ “alienation” lawsuit against the park project lacked merit and was not serious.

Apparently, with the Thurs., Dec. 16, ruling by Justice Rowan D. Wilson — a Court of Appeals judge who is, ironically, named after a tree — the de Blasio administration is now no longer in panicked, overdrive mode to destroy the 82-year-old park, but has eased into doing so under normal work hours.

Wilson rejected the opponents’ request for an appeal hearing on their already twice-defeated lawsuit, plus ruled that a previous temporary restraining order (T.R.O.) was no longer in effect. He also tossed out a motion to hold Mayor de Blasio in contempt of court since, with no T.R.O., it was moot.

A spokesperson for the city’s Department of Design and Construction, which is overseeing the $1.45 billion East Side Coastal Resiliency megaproject, did not respond when asked if the reason there was no work in the park last weekend was because the court challenge had ended.

Meanwhile, though no trees were felled in the park last weekend, one tree, with a red holiday ribbon on it, was delivered — to City Councilmember Carlina Rivera’s front door. On Saturday, some of the park activists who have been tirelessly fighting the E.S.C.R. project, hauled the sawed-off bough to the councilmember’s new home, which is located in the part of her district north of 14th Street. As The Village Sun previously reported, Rivera moved out of her native Loisaida this summer.

Written in red on the log was the phrase “LAND BACK,” referring to the effort by Indigenous peoples to reclaim possession of land throughout Turtle Island, the Indigenous name for North America.

While the legal fight to save the park’s southern half has been lost, Emily Johnson, a Native land and water protector from Alaska who now lives on the Lower East Side, has said, “This is not over.” On Saturday, she and another land protector tried to physically deliver the jumbo-sized “gift” to Rivera’s place, but wound up just leaving it on the sidewalk propped next to the building’s front door.

Meanwhile, Rivera rallied with allies — including East River public-housing tenant leaders — last Friday in support of the E.S.C.R. plan. The event’s message to the park activists was: “You don’t speak for us.” Calling themselves the Frontline Communities Coalition, they accused the project’s foes of putting saving what they called a “nonresilient park” over protecting people’s lives and homes.

As the park wrecking crew has now moved on to the iconic 1930-era amphitheater at Corlears Hook, opponents are raising the alarm that the demolition work may be releasing carcinogenic asbestos into the environment. However, spokespersons for both D.D.C. and the Parks Department told The Village Sun that the amphitheater was previously checked for asbestos and found to contain none.

“We looked into it and no asbestos in the amphitheater,” said D.D.C. spokesperson Ian Michaels. “There is a report that was prepared in February 2019 which looked at 13 samples taken from the amphitheater and they all came back negative for ‘asbestos-containing material,’ as it’s called.

“Also the Parks Department in 2001 did renovation work there and filed an ACP-5 [Asbestos Control Program] with the Buildings Department indicating no asbestos in the structure.”

Megan Moriarty, a Parks spokesperson, echoed Michaels’s comments regarding the 2019 report and 2001 study that both found no asbesetos in the historic structure.

The amphitheater’s band shell was rebuilt after 9/11 by an outside group as part of an effort to aid Lower Manhattan’s recovery from the terrorist attack.

In addition, yellow mesh ribbons recently tied around the park’s towering London plane trees lining the western edge of the shared bikeway / walkway north of Stanton Street don’t mean these trees are headed for the chainsaw — at least not yet, that is.

Parks’ Moriarty said workers were not aware of the ribbons. Johnson said children tied them on the trees.

A work schedule posted througout the park said that, as of Dec. 6, the bikeway / walkway would be closed all the way up to 10th Street. So far, though, the path has only been closed up to Stanton Street, where a chain-link fence blocks off the southern half of the park, which is currently being deforested and demolished.

Under E.S.C.R., the existing park — which runs from Montomery Street to 13th Street — is slated to be obliterated in two phases, with the north half following the south. After the park is no more, tons of infill soil will be heaped on the barren land to raise it 8 feet to 10 feet above the floodplain, and a new park will then be built on top of it.