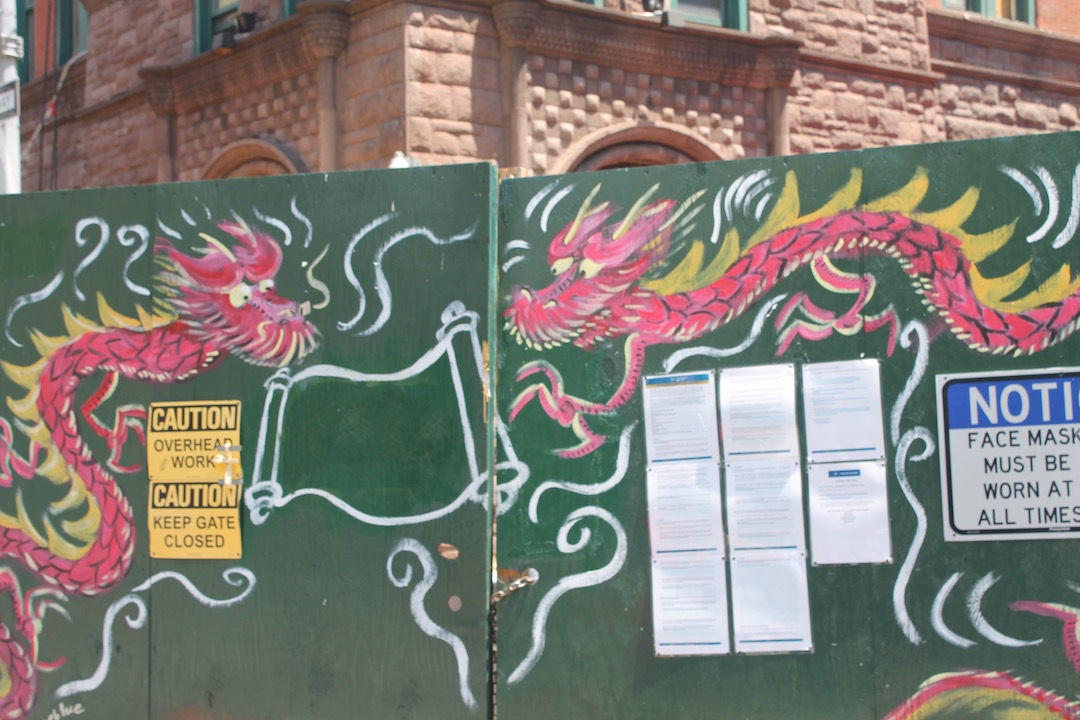 Dragon power: Two dragons were allowed to stay on the construction fence at 70 Mulberry St. But the slogan "Save P.S. 23," on the scroll between them, was painted over. (Photo by The Village Sun)

BY THE VILLAGE SUN | At least the money is there now. The question is, how much of the original building will still be there, after all is said and done?

The building — which housed several nonprofits, including the archives of the Museum of Chinese in America and the Chen Dance Center— was devastated by a fire in January. Since then, much of the structure has already been demolished.

A debate is currently raging within the community on whether to try to keep what’s left of the old school and rebuild it — or raze it totally and rebuild from the ground up.

Though the city initially planned to demolish 70 Mulberry completely, it has now agreed to stop at the second floor and allow for a 90-day “envisioning process” to help decide the building’s future.

Community Board 3 passed a resolution calling for the structure to be demolished down to the first floor, after which an inspection report to be issued at the end of June would be used to guide a decision on its future. However, Brooklyn Borough President Eric Adams, a leading candidate for mayor, recently rallied with advocates for saving the remnant of the building.

Karlin Chan, a C.B. 3 member and a leader in the effort to save as much of the historic building as possible, was elated that $80 million has been earmarked for the albeit still-undefined project.

“Now I hope there’s full transparency moving forward with the community scoping on the 90-day envisioning process,” he said. “The [voices at the] table should represent all factions of restore versus new building.

“We have an opportunity here to bring Chinatown’s only community space into this century,” he said. “We now must fight for a performance center and a gymnasium to be incorporated into the new space by adding floors.

“We have artists, performing arts, dance that have nowhere to put on a performance without paying exorbitant fees. We also have youth athletic leagues that need indoor space for basketball, etc.

“By the city’s own independent structural engineer, the building can be restored,” Chan added. “The important thing is funding has been allocated. It’s good news but I will remain cautiously optimistic till I see shovels in the ground for restoration or rebuilding.”

On Monday, an engineer assigned to the project was overseeing the job. He stood across the street on the corner of Mulberry and Bayard Sts. outside Columbus Park, smoking a cigar and keeping an eye on things.

He confirmed that they are bringing the building down to the second floor, but said the tower will remain up for now since that’s the main staircase.

“The fire started on the third floor and went up to the roof,” he explained. “We’re demolishing the rear wall. The whole third, fourth, fifth floor — most of it’s done.  We’ll be done by the end of July.”

He noted that while city engineers did file to demolish the whole building, right now “politically, they didn’t want to go there.”

“They gotta decide if they want to keep the building, build over it — or knock it down, put a new building,” he said.

A smaller issue is the dragons — as in, two dragons that were painted on the construction fencing surrounding the site. A “scroll” between the mythical creatures that said “Save P.S. 23” was covered over with green paint. But the dragons have been allowed to stay.

“The contractor is supposed to maintain a green fence,” the engineer explained. “One guy wrote ‘F– the Police.’ They covered it over. It’s a weekly thing.”