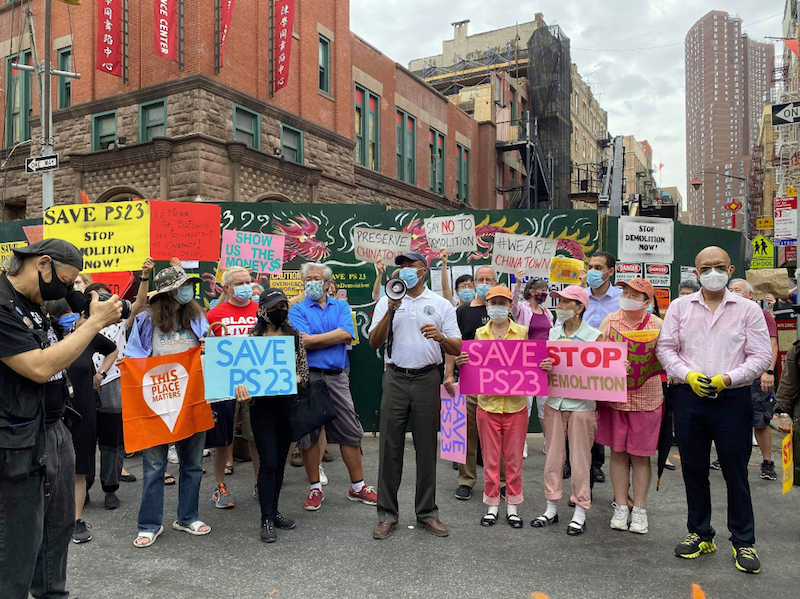 BY THE VILLAGE SUN | The fight to save a beloved Chinatown building is on the radar of at least one mayoral hopeful.

Brooklyn Borough President Eric Adams — a leading candidate for the city’s top job — stood with the community at a rally in front of 70 Mulberry St. on Saturday afternoon.

He was joined by dozens of local activists and preservationists who have made saving the historic building, the former P.S. 23, a top priority.

“Eric Adams stood strong with our position on saving this historical building and called for full funding expeditiously,” said Karlin Chan, who led the event. “He also said history cannot and should not be erased.”

The building, which in recent years was home to several area nonprofits, was severely damaged on its upper floors by a fire in January. While the structure has already been demolished down to its third floor, those at the protest want it to be fully rebuilt.

Others, including the city, however, want a new tower constructed at the site.

Built in 1891, the former P.S. 23 was the first large-scale school project  by CBJ Snyder, the city’s legendary schools architect, who would go on to build 170 schools in the city, most still in use today.

Other speakers at Saturday’s rally included Chan, Amy Chin of ThinkChinatown, Richard Moses of the Lower East Side Preservation Initiative, Michell Grubler of the Bowery Alliance of Neighbors, and State Committeeman Chris Marte.

Chan challenged the city’s initial position that the building was a total loss and must be razed. He noted that the city’s own alleged independent structural engineer said the old school could be restored with effort.

In addition, the Chinatown activist demanded that the city reopen Mulberry and Bayard Sts., which have been closed since the fire. The loss of foot and vehicle traffic on these streets is crushing their small businesses, threatening to close them permanently, he warned. Street lighting on Bayard St. also needs to be restored, he added.

Marte, meanwhile, referred to the city ignoring community concerns while planning a new borough-based prison at 125 White St., and now only repeating that pattern with 70 Mulberry St.

Community Board 3, for its part, is on record advocating for 70 Mulberry to be demolished except for the ground floor, and for an inspection report to be completed by the end of June, which would then be used to guide further decisions about the property.