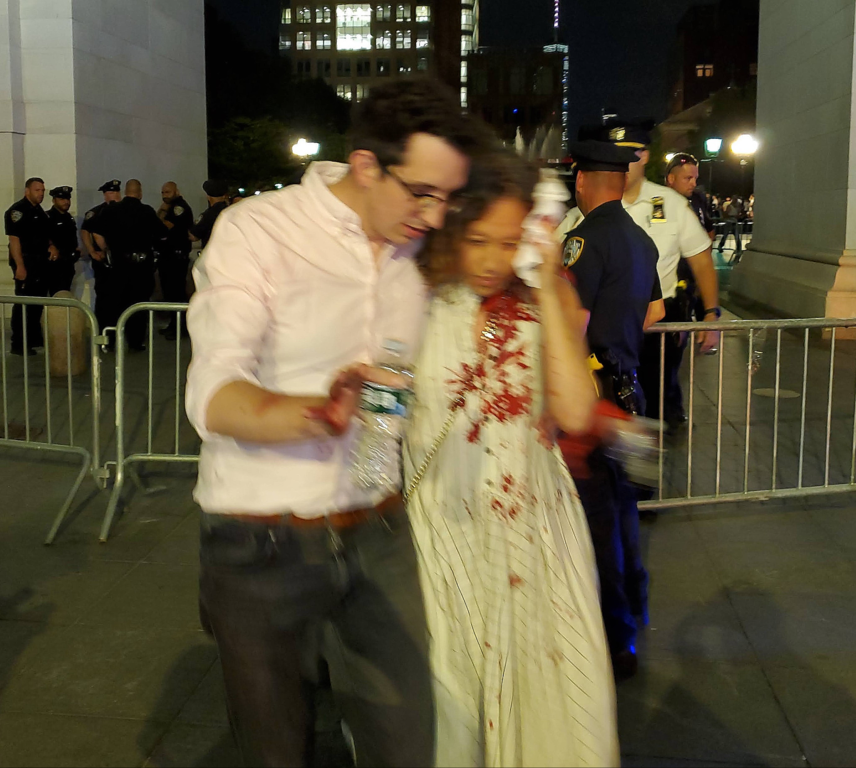 A woman headed to an ambulance after being run over by a crowd fleeing an armed man in Washington Square Park Saturday morning. (Photo by The Village Sun)

BY LINCOLN ANDERSON | A woman was left bleeding from her head in Washington Square Park Saturday morning after she was run over by stampeding revelers fleeing from a man waving a Taser, police said.

Cops said that around 12:40 a.m. Saturday, inside the park, a police officer saw a man, 42, with a Taser and large knife threatening people, “waving the Taser in a reckless and menacing manner.”

No one was shocked or stabbed by the man, but the crowd panicked and ran northward through the park toward the arch. A 44-year-old woman who was near the man tried to run away, too, but was knocked down by a group of people who were fleeing and she was run over, police said.

At first, as the crowd was suddenly seen fleeing through the park, it wasn’t clear exactly what was going on. One wondered if police were moving to enforce the midnight curfew and people were running away from them. But seconds later, a police officer came sprinting through them with the limp woman dramatically draped in his arms.

Police lifted her over the metal gates ringing the illuminated arch, behind which a detail of around two-dozen cops were stationed with a police van. The woman sat on the ground, blood splattered over her white dress and holding a cloth or small towel to her left temple as police gathered around her.

The Village Sun asked a man who was with the victim what happened and he calmly answered without alarm, “She just got knocked over.”

But one woman in the crowd was concerned — mainly, that the party might end.

“Turn the music back on!” she yelled. “They’re going to clear the park!”

“I was set up!” the handcuffed suspect yelled as he was loaded into a police van.

The victim was taken to Bellevue Hospital where she was reported in stable condition.

The arrested man was identified as Jason McDermott. He was charged with reckless endangerment and criminal possession of a weapon.

At 2:30 a.m., the park was still open and the curfew had not been enforced.

While some large nightclubs frisk patrons for weapons at the door, that does not happen at the outdoor raves at Washington Square. Members of a group called PEOPLE, who were handing out free food and water and collecting empty bottles and cans, said they have a de-escalation team in the park.

Friday night into Saturday morning, the police mainly remained under the arch, behind a perimeter of metal gates.