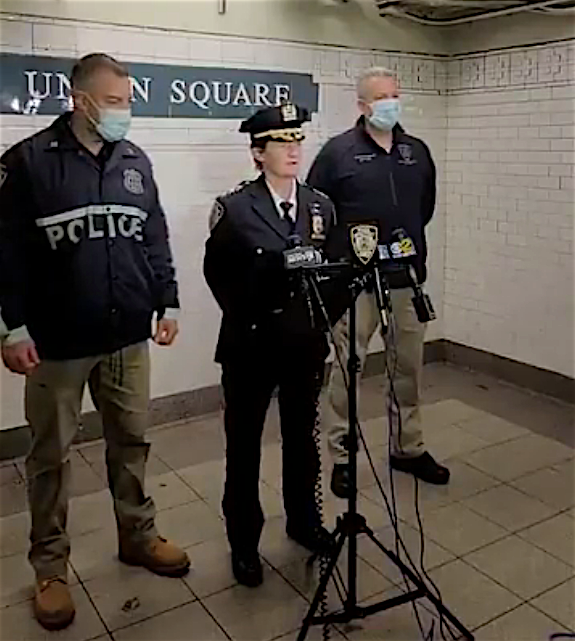 Woman shoved in front of train at Union Square but survives

In surveillance video of the shocking shove, a man is seen pacing about on the northbound East Side I.R.T. platform. He then suddenly rushes at and pushes a 40-year-old woman onto the tracks, just seconds before a train roars into the station.

This is crazy! All types of lawlessness happens in @NYCTSubway. Passengers nor employees are safe! pic.twitter.com/nwNEcDr8vk

Police Chief Kathleen O’Reilly, head of the Transit Division, said the victim, a Latina, had been waiting for the subway and that “the perpetrator waited purposely as the 5 train was approaching and pushed our victim onto the tracks.”

Two subway cars passed over the woman. Miraculously, though, she only suffered minor injuries because she fell “between the roadbed and the tracks,” O’Reilly said.

Watch as @NYPDTransit Chief O’Reilly briefs the media on an incident at Union Square in which a female was pushed on to the tracks as a train was pulling into the station. @FDNY helped the victim off the tracks, and our officers quickly made an arrest. pic.twitter.com/ajvHWVr5mr

A Transit worker yelled at the suspect, who — apparently thinking the man was a cop — dropped to the ground, after which he was soon arrested.

The New York Post identified the attacker as Aditya Vemulapati, saying that he is homeless. Vemulapati was reportedly charged with attempted murder, assault and reckless endangerment.

Chief O’Reilly noted that Union Square is one of the system’s busiest stations and, as a result, has a large number of police officers assigned to it, which helped result in a speedy arrest in this case.