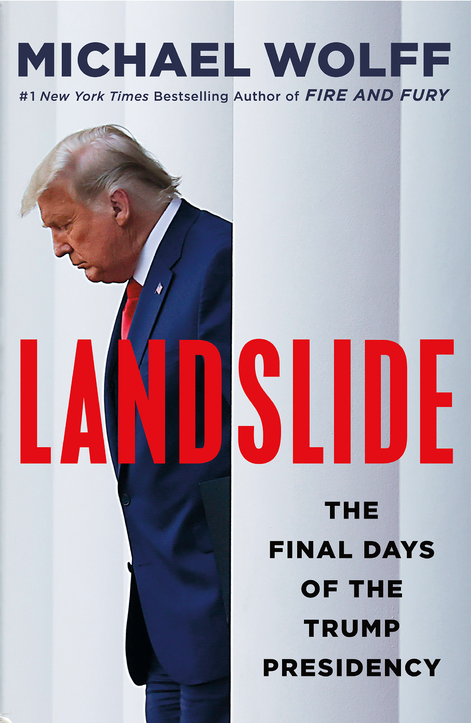 Wolff’s writing is a gas, and so is flatulent Rudy in his third Trump book, “Landslide”

BY MARY REINHOLZ | Anyone who has paid close attention to the news for the past year will probably not succumb to shock or incredulity upon learning that former President Donald Trump has an “alternative” view of reality and is allegedly “deranged” — especially in his insistence that he won the 2020 election against Joe Biden bigly, according to “Landslide, The Final Days of the Trump Presidency,” Michael Wolff’s third (and  supposedly) last tome on the Trump White House.

Indeed, nothing in Wolff’s withering attack on the one-term Republican president qualifies as a stunning insight or “scoop” — not even early on in the 312-pager when he writes how Trump believed Biden, the former vice president who would succeed him, was such a pathetic loser that the Democrats would swap out Sleepy Joe for Andrew Cuomo and Michelle Obama at the last moment.

Wolff, however, is a witty and captivating writer. He brilliantly depicts Trump’s disdain for Biden with cruel inner monologues: “How could I lose to this dummy, last in his class, busted for plagiarism, dumbest guy in the Senate — even Obama thinks he’s a joke — total has-been, never was. He’s going to be president? Yeah. Right.”

Of course, if anyone was a dummy, it was Trump himself, a know-nothing newbie in the White House who considered calling off the election because of the coronavirus epidemic, the deadly disease that the Dems were successfully using against him.

“People can’t get to the polls. It’s a national emergency, right?” he asked during a meeting of a continually shifting Team Trump, one generally led by Jared Kushner, the president’s son-in-law, and later encompassing  a bizarre cast of characters who told Trump whatever he wanted to hear.

“Mr. President, there isn’t any procedure for that,” replied Mark Meadows, Trump’s last chief of staff and one capable of putting his foot down, if ever so gently. “There would be no constitutional precedent or mechanism. The date is fixed. The First Tuesday… .”

Meadows’s “sugary North Carolina voice” was “tinged with panic,” observes the omniscient author, who once again gives readers a sense of  being right there in a historic place with a bunch of bumbling power players trying to control and placate a shallow man who didn’t know diddly about the routines and mechanics of governance.

Wolff, of course, has been faulted by Serious People in journalism for his lack of precise attribution to the Trump insiders he quotes from off the record and credits in his fast paced narratives, starting with his first 2018 best seller, “Fire and Fury,” which Trump himself attempted to stop from publication, and his second on the dysfunctional Trump administration, “Siege.”

This time, first-rate critics are touting “Landslide” as the “best” and most “chilling” of Wolff’s Trump trilogy. Even a New York Times reviewer claimed the book is “more apt” and “colorful”  than the earnest “I Alone Can Fix It,” written by two Pulitzer Prize-winning journalists from The Washington Post, who introduce one of the few heroes from Trumpland: General Mark A. Milley, chief of the Joint Chiefs of Staff. In it, Milley suggests the “F” word (fascist) to describe Trump’s political leanings and compares the Jan. 6 insurrectionists “to the people we fought against in World War II.”

It’s one of a raft of Trump books now out for summer reading.

There’s an array of buffoons, offbeat careerists and bona fide crazies jockeying for Trump’s attention  in “Landslide.” Wolff comes down hard on Rudy Giuliani, the former New York City Mafia prosecutor and “America’s Mayor” of 9/11, who takes on the role of Trump’s personal lawyer, encouraging and elaborating on his manifestly false claims of a “stolen election.” Rudy files numerous unsuccessful lawsuits while reportedly drinking heavily and perspiring so badly that dark liquid from his hair (dye? mascara?) drips down his face during a televised press conference. Rudy also gets ridiculed by Team Trump for constant bouts of flatulence.

Trump, always sensitive to his image and how it could be affected by his associates, became “pissed off” by Rudy’s embarrassing behavior, reports Wolff: “What’s going on with this shit dropping off his face?” the then-president supposedly complained. “And they’re killing Sidney in the press for what she’s saying…saying crazy shit… .”

He was referring to right-wing lawyer Sidney Powell, who attributed Trump’s loss in the election to “The Communists” via voting machines allegedly created by the late leftist leader Hugo Chavez in Venezuela that were designed to somehow flip votes from Trump to Biden.

The mordant Wolff apparently found Powell’s theorizing about Trump’s election loss hilarious. He writes: “Even Powell seemed to think it was a put-on, or theater or burlesque and not something a reasonable person would believe. Indeed, Powell’s tale of a worldwide conspiracy to subvert the U.S. presidential election was, after confusion and disbelief, gut splitting.”

Some White House aides, meanwhile, were trying to understand how they’d gotten there, a “tale of the frog in the pit of slowly heating water might describe their situation. Somehow they did not realize they were being boiled alive.”

So goes “Landslide,” on through Jan. 6 when Trump revs up his  crowd of true believers and says he will be “walking” to the Capitol with them in the delusional hope that Vice President Mike Pence will “do the right thing” and refuse to certify the election. Wolff writes that Trump seemed unsure when Mark Meadows asked him about his proposed stroll, saying, “How would we do that? We can’t organize that. We can’t.”

Trump seemed confused when the siege of the Capitol began.

“In part, the president seemed just not to be grasping the facts as they were coming through — mounting crowds, breached barricades, protestors entering the Capitol,” Wolff writes. “Or maybe he was simply disagreeing with them. These people were protesting the election, he was was still repeating as late as 2:30. The protestors want Pence to do the right thing, These were good protestors, his protestors.”

Most of his White House staff and fawning loyalists were gone when Trump and his wife Melania left Washington, D.C., for Florida. Wolff ends “Landslide” interviewing him in the lobby of Mar-a-Lago, his reputed throne room, at one point asking him if he had any regrets. Trump’s answer, “‘I gave up this life’ — that is, apparently the Palm Beach life — ‘for a life dealing with fine people but also absolute scum and treachery and fake witch hunts. People said, ‘The greatest life. Look what you gave up.’ But I’ve also done a thousand things that nobody has done. Nobody’s done what I’ve done.'”

Then Michael Wolff went to dinner with Trump and Melania at his side, with the Mar-a-Lago diners, as he put it, “all chiffon and blazers, rising and offering a round of deep and heartfelt applause. He was home,” the author writes. “But would he stay there?” It’s a question that still resonates.