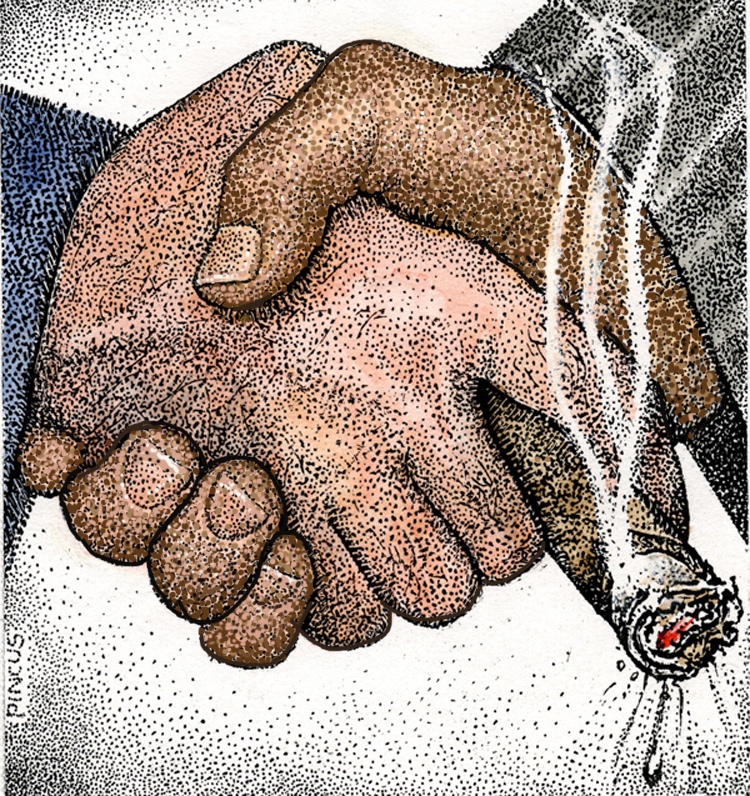 "The Art of the Deal." (lllustration by Harry Pincus)

What, me worry? All this too shall pass…

BY HARRY PINCUS | Years ago, an old left friend went to the Labor Day Parade and became excited when he heard a pounding refrain emanating from the distant marchers. He was reminded of his youth, in the Thirties, when the city was alive with protest and discontent. Revolution blew through Union Square with yesterday’s Yiddish newspapers, and now my friend waited to hear what this new wave of marchers was chanting. As they got closer, my friend was disappointed, when he realized that the uproar was merely the fish mongers union chanting, “EAT FISH! EAT FISH!”

I was similarly disappointed over the weekend when a loud demonstration in Washington Square Park turned out to be a group of millennials and Gen Z’s chanting that “Birds Are Not Real!” A young lady told me in all seriousness that all birds are drones, including the pet parakeet I had as a child, and that Donald Trump won the election. I suppose this attempt at irony is one way of dealing with what appears to be the tightening noose of reality, but maybe we need to look up from our phones and try another tack.

We are about to have an election that is akin to a national psychotic episode, or a civil war, and one can only hope that it remains civil. In the western swing state (sounds musical, but it ain’t) of Error-Zona, an attractive Trump drone has already declared that she will not accept the result if she loses, and in the Confederate state of George-Yuh, a brain-damaged football player is waving a tin badge and denying that he knew any of the pregnant cows in the pasture. The governorship of Pencil-Vain-Yuh could be claimed by a candidate who would warm the heart of Hitler, and it goes on and on. Is it the fault of the birds, or are the birds just descending upon us as they did in the Hitchcock film?

As far as drones are concerned, they are no laughing matter. It seems to me that we are on the brink of a world war, and Russia, Iran, North Korea and China represent a rather formidable axis, which could be joined by other nations that are proponents of autocratic dictatorships. Perhaps the United States will restore the fat arse of a criminal king to the throne, and then we too can join the evil axis, instead of resisting it. One wonders why this country is spending so much on advanced fighter planes and aircraft carriers when the future of war appears to be drones without warriors, and a “democracy” without elections. Now war really is for the birds!

Here in the city, six-figure wage earners can’t afford their rent, and we are about to be overwhelmed by a winter of homelessness and a future of overwhelming municipal debt. The governor of Tex-Ass is shipping helpless immigrants to our Port Authority Bus Terminal and no one knows what to do with them. Since the governor of Tex-Ass is himself confined to a wheelchair, one might think that he might have developed some empathy, but no, not at all! His election strategy is more akin to the Nazis, who destroyed the lives of the handicapped, so perhaps the governor of Tex-Ass ought to ship everyone who requires a wheelchair to the Port Authority Bus Terminal, himself included.

Perhaps the most disturbing aspect of our current situation is not inflation or the price of oil, but the racial divide which fuels our discontent. The corporations who make advertisements have decided to depict a world of racial equality and reconciliation, but not the real world, where many will never share in this new fantasy, and they know it. They are homeless on the street, and raging in the subway, and their plight fuels the drones who support Trump, and deny reality.

The great songwriter Doc Pomus, who himself was confined to a wheelchair, used to hand out a business card that said, “I’ve got my own problems.” Indeed, we all do, but we still need to resist the clarion voice of the chip, which urges us to delve into our own fantasy world and act solely in what we deem to be our own best interests.

I’m old enough to have seen a lot of it before, and perhaps that gives me a certain sense of…this too shall pass. I was young when the city was last bankrupt, but they were putting in new bricks on Sixth Avenue that spring, and now they say they are going to restore the rusted flags on the Avenue of the Americas. Blondie was living on the Bowery and people like me, the son of a Brooklyn subway conductor, were able to come here because the elders thought that grass was about to sprout in the cracks of the sidewalk.

When I see the oldest president say he will rid us of assault weapons, I want to believe him because there must be some sense of self-preservation left in us. I’m reminded of the Cuban Missile Crisis, when I was in sixth grade, and the youngest president had the wisdom to walk away from his cabinet, who were unanimously urging World War III. It was 60 years ago this week, when John F. Kennedy simply told the hawks, “Let’s go to dinner.”

Pincus is an award-winning illustrator who lives in Soho. He is currently completing a memoir titled “Artist Proof.”