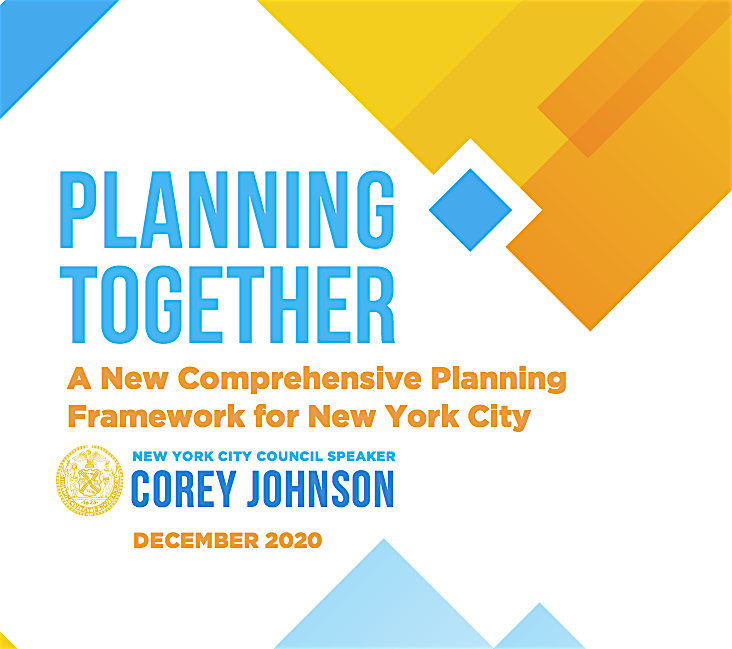 The writer warns that a proposed law for long-range planning would steer development to already overbuilt neighborhoods in the city's historic core — areas already aggressively coveted by Big Real Estate seeking maximum profits. The law would also be fundamentally antidemocratic, in her view.

What kind of planning do we want? Not another Robert Moses!

BY LYNN ELLSWORTH | In 1961, Jane Jacobs, author of “The Death and Life of Great American Cities,” called city planning “a pseudo-science” that had “arisen on a foundation of nonsense.”

Jacobs argued for an end to gigantic plans that relied on “catastrophic money” and “centralized processes” and “standardized solutions.” All that, she argued, just created “dead places” —  like today’s Hudson Yards.

More recently, Sam Stein, in his book “Capital City: Gentrification and the Real Estate State,” chastised planners for serving the interest of Big Real Estate rather than the public good.

It is true that for all their talk of serving the public good, planners do appear to dislike citizens. For one, they are trained to think of citizens as generic NIMBYs standing in the way of their ideas. Moreover, as a profession, they tend to overly admire Robert Moses, the man who imposed his will on New York City in a way that was top-down, cruel and racist — not to mention plain destructive.

Moses’ defenders always respond, “At least he got something done,” and argue for more central planning power, skirting the issue of whether better plans might have been made in another way.

These issues have returned anew with the announcement of a proposed planning law that City Council Speaker Corey Johnson is promoting. The law is a very bad one. Citizens should definitely object to it, and stop this law before the city puts a new Robert Moses into power.

The purpose of the law is, to quote from it: “to prioritize population growth, where applicable, in areas that have high access to opportunity and low risk for displacement.”

(See the proposed law and the report about it called “Planning Together” here.)

“High opportunity,” “amenity rich” and “well-resourced” are code words among planners for overdeveloped neighborhoods in the historic core of the city —  Manhattan south of 125th St., Downtown Brooklyn, Brownstone Brooklyn around Prospect Park and the East River. (See Vicki Been’s report “Where We Live.”)

Oddly, these areas are also places where Big Real Estate profits are highest and where most of the new development since 2010 has already been built. Why then is the planning law so laser-focussed on driving growth to the already denser parts of the city, before the planning is even conducted? Why does a new all-powerful Director get to assign housing targets based on this high-opportunity theory? The law has planning exactly backwards.

We are supposed to use planning to figure out and debate where to put people (a.k.a. “density”) and infrastructure, not to do end runs around communities and drive new density to predetermined areas of the city!

1.) It fails to address the elephant in the room: the revolving door between Big Real Estate and government, thus undermining the legitimacy of the process. Big Real Estate has already captured many of the land-use regulatory agencies of the city; it thus imposes its vision upon us through its people who run the Department of City Planning, the Economic Development Corporation and the Board of Standards and Appeals. See, for example, my op-ed “Fox Guarding the Henhouse at City Planning.”

2.) The proposed law presupposes that the only way to deal with high housing prices is to obsessively build hyper-dense (and tall) near transit, which is what we have already been doing, based on a discredited trickle-down housing-supply theory. It’s a planning approach arising from a bad theory.

3.) It presupposes that the only way to deal with displacement risk is to build like crazy when, in fact, displacement risk needs to be managed in the first instance through legislation. Universal rent stabilization and the Good Cause Eviction Act would largely solve most of the displacement problem. Incremental building of more public-social housing units at the low end of the market would deal with the rest.

4.) It imposes Soviet-style housing targets on “low risk for displacement” neighborhoods, without having had binding public policy discussion about the upper limits or lower bounds of density. What kind of city do we want and how should we spread the benefits and burdens of density? The law presupposes that density can be infinite.

5.) The legislation presumes the scientific legitimacy of a dubious “index of displacement risk” that gets coded into law. This is just not credible. Such indices are built on a host of assumptions and not valid. Displacement risk is a political phenomenon as much as a market one.

6.) Also, the planning law ignores key questions for public debate. For example, when are we too dense to have a livable city? When are we not dense enough? How should density be distributed? Should it be distributed more evenly, like peanut butter on a slice of bread, or all piled up in the historic core? And who should decide these questions, the Director or the citizens of the city? All this is simply ignored, even though these questions are the very heart of planning!

7.) At no point can neighborhoods, residents, taxpayers and citizens vote on any plans at any time. There is no voting, no referenda, no democracy. In other words, the proposed law is profoundly anti-democratic.

8.) Under the proposed law, the housing targets for each neighborhood rely on a bad theory that Big Real Estate loves: New population growth should be targeted to existing “high-opportunity” areas. That’s an invitation for selective overdevelopment, leaving the historic parts of our city vulnerable to more demolition while ignoring the investment needs of currently “low opportunity” neighborhoods.

There is also this troubling fact: Residents of low-amenity neighborhoods have clearly said they don’t want to move. (See the city report “Where We Live.”) They want their existing neighborhoods to have amenities every bit as good as the neighborhoods in the core. They just don’t want to be gentrified out — or, rather, displaced.

9.) The law strengthens an already king-like mayor and recreates a too-powerful Robert Moses figure in the form of “The Director.” Citizens would not be able to reject this person.

Procedurally, here’s how the planning system would work: The mayor would appoint a Robert Moses-like figure called “The Director.” The Director would produce research reports on a lot of topics, all required by the new law — which is O.K. Trouble arises when the Director is told by law to create housing targets (Soviet-style) for how much new housing each neighborhood (in high-opportunity/low-displacement areas) must produce.

Developers would have to convince the Director that a new development was consistent with the plan. If it was, they could avoid public review, citizen outcry or deference to the local councilmember for the particular project. A few public hearings are built into the process, but they are just advisory white noise, like they are today. Citizens and taxpayers never get to vote on the plan.

While this procedure sounds plausible for things like roads, schools, transit, parks, trash disposal, libraries, sewage treatment and tunnels, this plan is not really about those things. It’s really about requiring each neighborhood to fill those assigned housing targets.

The law creates new committees to work with the Director, with trivial, advisory roles. For example, the mayor, borough presidents and the City Council would appoint a 13-member “long-term planning steering committee” made up of demographically diverse “experts.” Their role would be to give advice to the Director — who could ignore it. The steering committee would also appoint five borough committees, which would provide borough-specific feedback at various points in the planning process. Their advice would also just be white noise. Community boards would do nothing different than what they do now.

To be sure, the city has a lot of problems that could use some better planning. For years, the Big Apple has not actually been growing, but instead leaking population (often black population), even before COVID. The population in the core is also too packed-in, making some neighborhoods unlivable. Other parts of the city are not dense enough and look like suburbs.

Parts of the city are definitely going to be flooded. Some schools are already massively overcrowded and in dire need of renovation. The subways, pre-COVID, were incredibly overcrowded.

Swimming is even a rationed resource: Children in core Williamsburg have to wait more than an hour in the summer heat to get into the McCarren Pool and can’t swim very long before getting rotated out. (I personally witnessed this in the summer of 2018. See also a slide show by the Times Union.)

But we don’t need an all-powerful Robert Moses-like figure assigning housing targets to deal with these problems. Nor do we need a sham, focus-group version of “community planning” to pretend to be listening to us while it has already decided to direct population growth to the city’s overdeveloped core.

If you agree, call your city councilmember and urge him or her not to vote for this new proposal. We need something better, perhaps more focussed on basic infrastructure over a longer time period, with less preconceived biases about where “to direct growth.” And we need plan with a lot more democracy in it — not less.