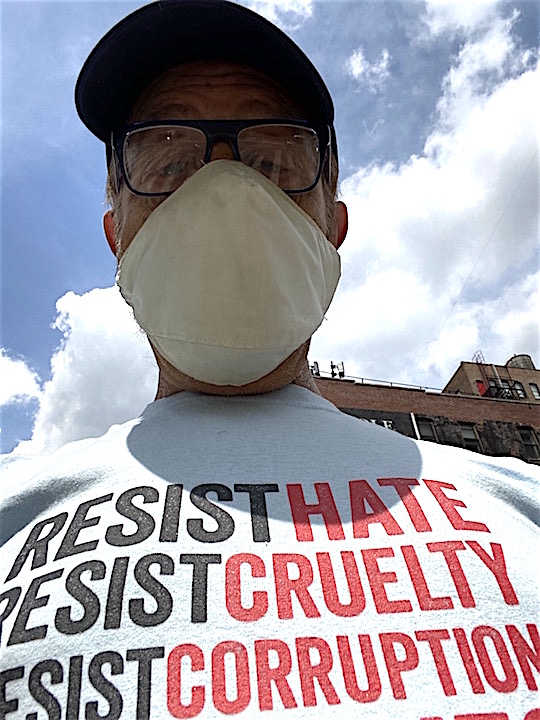 BY ARTHUR Z. SCHWARTZ | I stood tonight for a half hour on the corner of 12th St. and Sixth Ave., and watched some 25,000 to 30,000 people march by chanting, singing, beating drums and demanding an end to systemic racism in our country.

We live in perhaps the most liberal community in America. Our Assembly District (south of W. 15th St.) is 95 percent White, yet we were the only non-Black district in New York to vote for Barack Obama versus Hillary Clinton in 2008.

We gave Zephyr Teachout 65 percent of our votes in her 2014 primary race versus Andrew Cuomo. We are supporters of every progressive cause under the sun — green energy, Medicare for All, L.G.B.T.Q. rights, criminal justice reform, a woman’s right to choose, #MeToo, and now we find ourselves smugly feeling that the rest of the country is catching up to us when it comes to our opposition to systemic racism.

Our local politicians have strongly endorsed measures to address the over-policing of minority communities, and to require police accountability. Many have joined the marches.

But they — and we — ignore a very fundamental problem, which became clear to me earlier this afternoon when a Black client of mine came by my Village home to sign some papers. He was the only Black face on the block, save one UPS delivery driver. The last census showed that Community Board 2 — 14th St. to Canal St., Hudson River to Fourth Ave./Bowery — was 94 percent White, 4 percent Chinese, and 2 percent Black and Hispanic. And I daresay that in the 10 years since that census, little has changed.

We live in a White ghetto, one where my kids didn’t see Black and Hispanic children in the playground, and where the only Black and Hispanic and Asian people we see work in local stores or babysit people’s kids, or deliver our packages.

We live in
a White ghetto.

It is a problem which can only be dealt with through a genuine effort to create affordable housing in our community. I’m sure that the new building about to open up on University Place and E. 12th St. or the two towers going up on both sides of 14th St. and Sixth Ave. will have few people of color.

Whenever we have opportunities to change things, our political leaders, from Mayor de Blasio to Corey Johnson and on down, fail on this mission. Five years ago, Corey Johnson helped broker a deal across from Pier 40 that was going to get 500 affordable apartments, in return for the right to build tall apartment towers. Quietly, over the years, those promises — a large part of them — ended.

Where the majority of those affordable units were going to be built will now be a new office tower rented to Google. Corey Johnson left a loophole — and the developers walked right through it.

St. Vincent’s Hospital was tragically closed down 10 years ago this month. A hospital that served both our community and the working people, mostly Black and Hispanic, of West Chelsea and Chinatown was replaced with ultra-expensive condos.

After the June 23 election, I will be launching a campaign for City Council — for our community and our neighbors to the north — to do something different. Step one will be to address the situation where we have decaying New York City Housing Authority buildings in West Chelsea surrounded by gentrification — while the public-housing buildings’ elevators, plumbing and garbage compactors do not work.

Second will be to force all new development in our Lower West Side communities to include 50 percent affordable housing — to ungentrify and give some meaning to the chants of “Black Lives Matter.”

I hope my neighbors join me.

And while you are at it, on June 23 — or by June 23, if you are voting by absentee ballot — cast a vote for Bernie Sanders (which will be a vote for his amazing policy proposals), and vote for Penny Mintz for State Democratic Committee — to add another activist to the Democratic Party’s leadership.