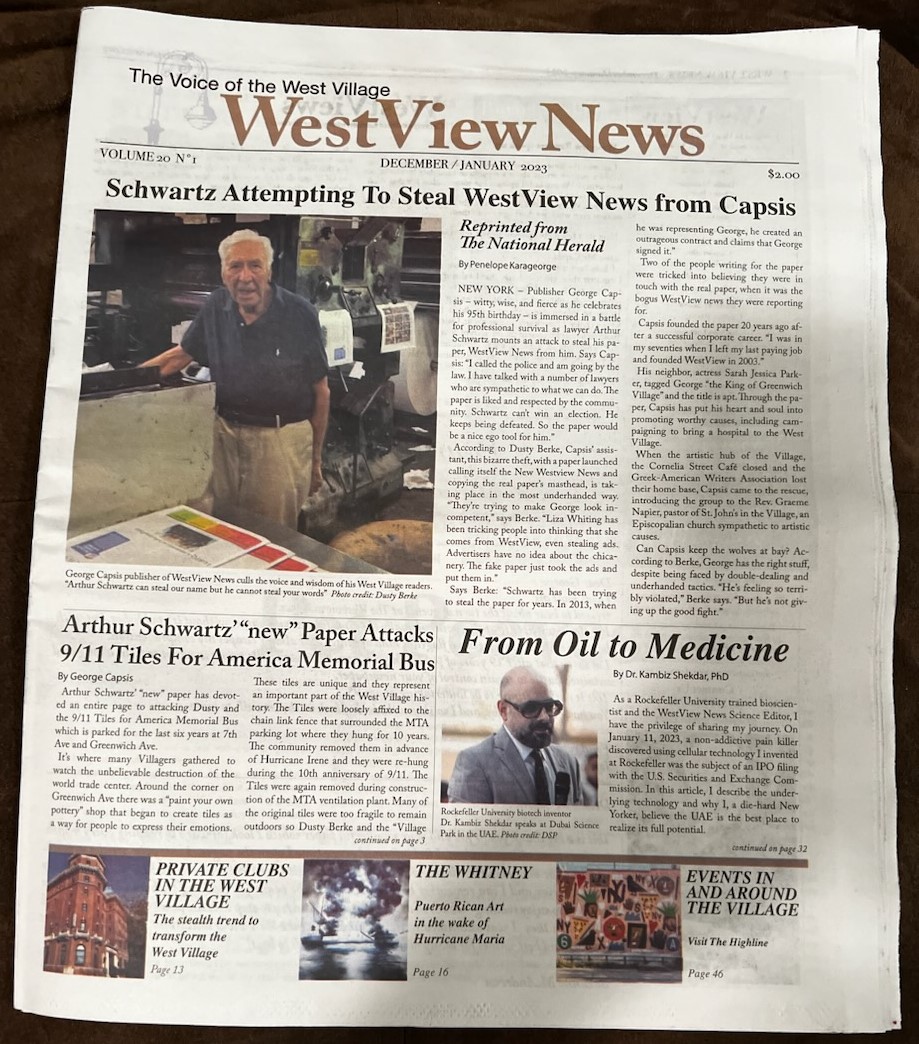 The December/January issue of WestView News.

BY LINCOLN ANDERSON | They said they couldn’t do it — but they did it.

A new issue of WestView News has been published, the newspaper’s first since its November monthly print issue. It’s dubbed the December/January issue.

Meawhile, Arthur Schwartz, a leader of the new breakway Village View paper, now says he will be suing George Capsis, the founding publisher of WestView News, for defamation due to accusations against him made in Capsis’s new issue.

The front page of WestView News features two articles condemning Democratic District Leader Schwartz, the senior editor of the new Village View. One is a pickup of an article about the Greenwich Village newspaper clash from the National Herald, a Greek-American newspaper, sporting the headline “Schwartz Attempting To Steal WestView News From Capsis.” The other, bylined by Capsis, is headlined, “Arthur Schwartz’s ‘New’ Paper Attacks 9/11 Tiles for America Memorial Bus”; the “attack” refers to how the letters page of the January issue of New Westview (Village View) slammed Dusty Berke’s 9/11 tiles bus — which was subsequently towed from Mulry Square by police, who also arrested Berke, after the bus had been parked there for six years.

The third Page One article is by Kambiz Shekdar — who is listed on WestView’s masthead as “Science Editor.” Headlined “From Oil To Medicine,” the article advocates for the United Arab Emirates rather than the United States to be a center for biopharma research. Seemingly “from out of left field,” it’s certainly not a typical article one would expect in a community newspaper — unless maybe you were reading DubaiView News. It’s also prominently the lead article on WestView News’s Web site.

In other somewhat nontraditional fare for a community newspaper, there are also two articles on finance and an article apiece on World War I and World War II.

For a PDF version of the print issue, click here.

Speaking of the masthead, Capsis, 95, is listed as the paper’s publisher and executive editor. Berke who was put on the November paper’s masthead as editor after former editor Kim Plosia left to help start up the new breakaway paper, does not appear anywhere on the December/January masthead.

At any rate, WestView has managed to publish a 48-page issue, even after its paid staff, including its production and layout workers, defected with Schwartz to launch New WestView News, whose name was subsequently changed to New Westview and most recently to Village View. WestView News managed to put together the issue using a remote page-layout company.

The latest WestView News also includes a full-page ad, with a photo of Capsis, soliciting donations for “A Legal Defense and Legacy Fund” to fight against the breakaway newspaper, or as Capsis puts it, “to stop Arthur and his co-conspirators from committing any further crimes against me.”

“We started distributing the paper yesterday,” Berke said on Saturday. “We’re out in a few spots already.”

Regarding her absence from the masthead, Berke said, “I’ve never been on the masthead before and I prefer to remain in the background. There were five people in the room that said I should have Kim’s title [after Plosia left the paper]. I did a tremendous amount of work. I consider my job is to support George however I can. I bring people, ads, money and magic — and George always says I make a good cup of coffee.”

Speaking of mastheads, the January New WestView (Village View) notably did not have one at all.

Meanwhile, Schwartz, who is also an activist attorney, called the Capsis newspaper’s attacks on him “silly.”

“I think the front-page headline and the focus of the first four pages on me, accusing me of stealing production staff and contributors, is silly,” he said. “Looks like he has plenty of contributors — although some, Brian Pape, Gordon Hughes and Keith Michael, now write for Village View; they handed in their articles for this WestView [Capsis’s paper] in mid-November. And there are 10 people listed on his masthead who aren’t there anymore. Just ask Dusty if she or George was the editor,” he added.

“I think our third issue will look, I believe, a lot more like a community paper,” Schwartz said. “George thinks a community paper should have articles about ‘Naked Short Selling,’ ‘Capital Markets,’ World War I and two pages about how 5G towers can damage your DNA — I don’t agree.”

Capsis at the end of December filed a cease-and-desist letter against Schwartz, Plosia and Liza Whiting, another Village View staffer, warning them to stop using the WestView News name and design template, among other things. An initial settlement talk on Jan. 11 went well, Schwartz reported, and follow-up talks were planned. But, responding to accusations in Capsis’s new “legal defense and legacy fund” ad, Schwartz is now the one going on the warpath, legally speaking.

“As for George’s statements that I engaged in ‘mail fraud’ and ‘false advertising’ and that these ‘crimes’ are cause for me to be disbarred,” he said, “I will be filing a defamation suit shortly.”