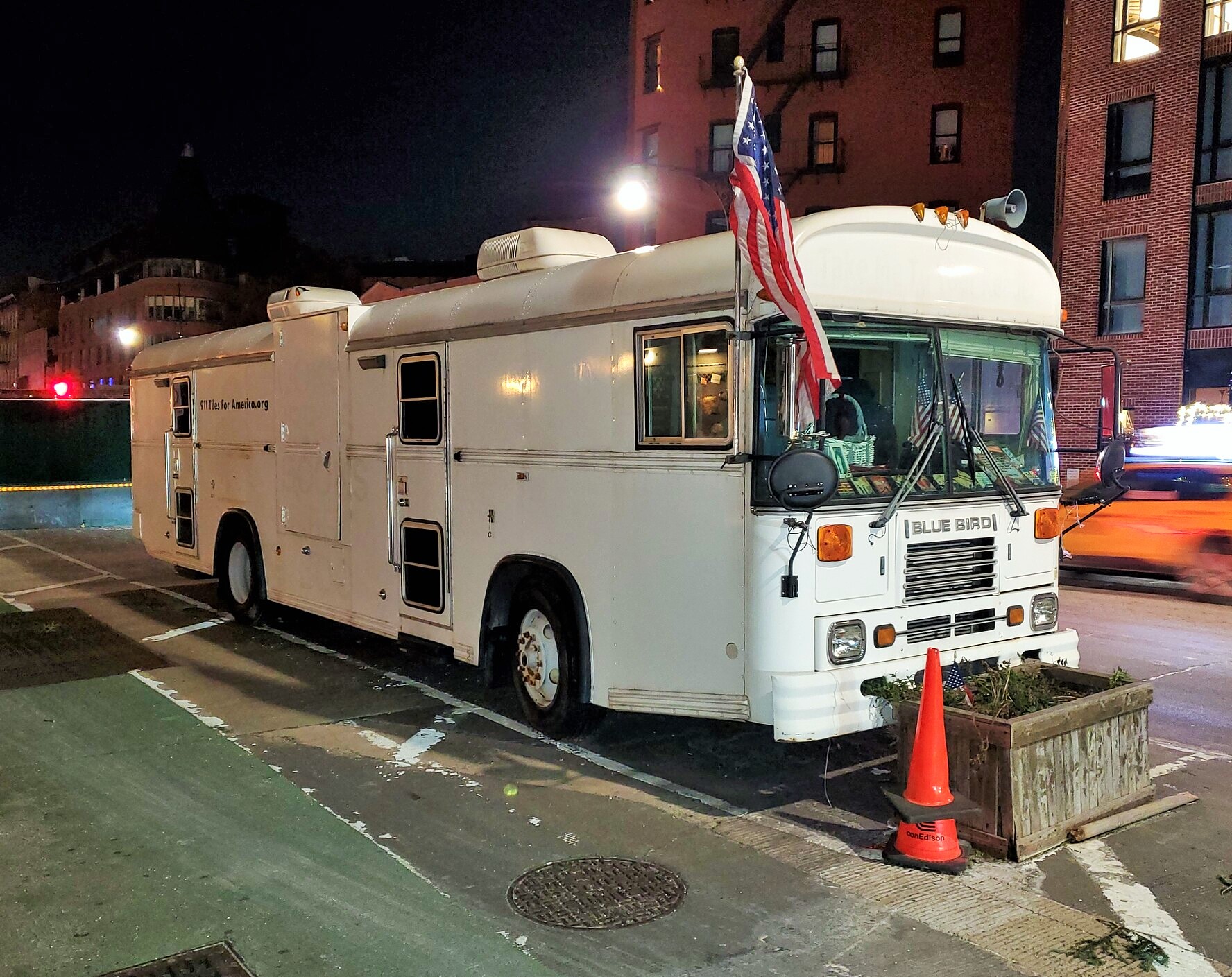 The 9/11 tiles bus was towed away by police. (Photo by The Village Sun)

BY LINCOLN ANDERSON | Updated Jan. 19, 4:15 p.m.: A day after being arrested in her 9/11 Tiles for America Memorial Bus, Dusty Berke said she had no regrets about making a stand to protect the unique vehicle, though some in the neighborhood deride it as an eyesore.

According to police, Berke was arrested Tues., Jan. 17, around 12:30 p.m. at Greenwich Avenue and Seventh Avenue South as she refused to get off of the bus as it was being hauled off by a New York Police Department tow truck.

A police spokesperson said there had been “multiple complaints about an unregistered bus” parked for a long period of time at the location. The bus has been rooted there for six years.

Berke was charged with obstruction of governmental administration and disorderly conduct.

Berke, 61, lives at 69 Charles St., the building owned by George Capsis, the publisher of WestView News, two blocks away from the bus’s former parking spot. In November, Berke became the paper’s editor after its staff and some of its contributors defected to start a new paper, New WestView News, which was most recently renamed Village View. According to the defectors, it was Berke’s increasing power at the paper — and her embrace of conspiracy theories — that drove them off.

“I got a call from somebody in the neighborhood saying they’re trying to tow the bus,” Berke recalled, saying she immediately ran right over. She pleaded with the cops to let the bus stay.

“I told them, ‘You can’t tow the bus. The tiles will fall over and break. They’re loose on the shelves.'”

Berke said she boarded the vehicle but that the police, who were from the 6th Precinct, told her she had to get off of it.

According to her, a female officer said they were taking the bus away because its registration had expired.

“I said, ‘It expired there years ago,'” Berke retorted.

“They handcuffed me and carried me off the bus and put me in a squad car,” she said. “They didn’t want to arrest me. But I was adamant that they couldn’t move the bus without damaging the tiles. … I told them, ‘Arthur’s attacking George. He’s trying to steal the paper — now they’re attacking me.'”

Berke subsequently wound up spending eight hours at the Greenwich Village precinct because she refused to be fingerprinted or have her mugshot photo taken.

“I said, ‘I’m not a criminal. I was just protecting the 9/11 Tiles Memorial,'” she said. “‘I don’t belong in the police database like a criminal.'”

Berke related that, in response, police then told her they would be forced to send her to get a psychiatric evaluation and then on to central booking a.k.a. The Tombs. However, she said she became concerned about Capsis, who is 95 and whom Berke basically looks after, though she insists she is not technically his caretaker.

“I got worried about George,” she said.

So she relented and was fingerprinted and let her photo be taken.

She said they had been trying to send a new issue of WestView News to the printer on Tuesday when the bus brouhaha broke out.

Berke was furious at her nemesis, Arthur Schwartz, for prominently calling attention to the bus on the letters page — she termed it an “ad” — of the January issue of New Westview. The paper’s inaugural December issue listed Schwartz as senior editor, though the January print issue curiously lacks a masthead saying who the editors and contributors are.

“Arthur put a full-page ad in his paper attacking me,” she accused, adding, “For me, the people who attacked the bus committed a crime.”

Although the 6th Precinct has apparently not done much enforcement against the bus in its half-dozen years there, Berke said she’s doled out her share of fines.

However, she said, “I believe the 6th Precinct left it there over the years because it was the right thing to do.”

“We had that vehicle towed after numerous community complaints,” he said. “People were also reaching out to elected officials complaining about it. It was towed because it was unregistered, uninspected, parked the wrong way [facing Uptown] and had over $5,000 in unpaid summonses. Our requests to move the vehicle voluntarily went unanswered for years. Dusty was arrested after she refused numerous orders to leave the bus as she remained on it in an effort to prevent us from towing it. She was released shortly after on a desk appearance ticket.”

Spataro added that, while the bus was parked in a metered spot, the meter was not being fed. As for whether any local politicians had directly complained about the vehicle, he said to check with the polticians.

Berke got involved with the 9/11 tiles when Hurricane Irene was about to sweep into town back in August 2011. The tiles had been created at a nearby store, Our Name Is Mud, after the attack on the World Trade Center. The small glazed squares had been left hanging on a chain-link fence ringing a Metropolitan Transportation Authority parking lot on the corner, and Berke feared they would be blown off and damaged by the storm.

Basically, Berke simply took possession of a large portion of the hundreds of tiles that had been on the fence. Some are in the bus, some are stored in a warehouse. At one point some years ago, Berke was trying to find a brick-and-mortar space nearby to display the tiles, and was also said to be mulling the idea of taking them on a national tour. Another group of the 9/11 tiles that are housed in the Jefferson Market Library are not under Berke’s control.

Berke and a friend bought the Blue Bird specialty bus six years ago for $10,000 on craigslist. It was previously a mobile library in the Midwest, and its built-in bookshelves came in handy for storing and displaying the 9/11 tiles. However, the bus is really only open to the public one day a year, on the anniversary of the devastating terrorist attack that killed 2,753 people in Lower Manhattan. As well as the tiles’ protector, Berke is also a 9/11 conspiracy theorist, in that she believes 7 World Trade Center was brought down by a so-called controlled demolition.

Asked for comment on Berke’s being busted onboard the bus, Schwartz said he was not involved — and instead singled out a letter writer.

“I have never had anything to do with her bus,” he said. “Never spoke to anyone official about it. It is true that in the last New Westview (now Village View) in the letters to the editor section, someone named Hamilton Frazier Moore published correspondence with Glick’s Chief of Staff Tracy Jackson about the bus. As I said, I was not involved.”

Of course, Moore did not “self publish” the e-mails — it was someone’s call on the paper’s editorial side to run that correspondence.

“We also published a letter from a friend of Dusty’s named Kelly Gallagher, who charged the ‘New Westview Team’ of wanting to kill ‘a voice in the Village, Dusty Berke,’ and called the paper ‘more censorship directed by perverts,'” he added. “She continued, ‘the more reason these stories [stories about all the horrible things Dusty has brought to the surface] aren’t out is because they [New Westview] are organized by criminals in media and perverts in D.C. running international crime syndicates.’ We published both sides, even on pain of being called ‘perverts.’ This month we got a letter stating that Dusty had told the writer that she was ‘sent by God to set up the tile bus.’ We will run that, too. I personally think the issue is way down on the scale of relevancy, but folks who live on those nearby corners and the restaurant next door probably don’t.

“I really don’t care about Dusty,” Schwartz stated. “I cared about her taking over an important Village institution, WestView News, so she could run QAnon conspiracy theories and have a monthly column from Lyndon LaRouche’s chief of staff. I have worked with the staff to create a substitute. Dusty has been working to republish ‘George’s paper’ without any of the former staff and maybe two of its 15 regular contributors. It will be ‘Dusty’s paper.’ Good luck to her. We’ll see what she comes up with and how broadly it is distributed.”

As for Berke, she said she plans to get the 9/11 tiles bus out of the police tow pound and restore it to where it was.

“I have every intention of bringing it back to that spot — where it belongs,” she declared.

She has some flashy chrome hubcaps she plans to put on the vehicle’s wheels to snazz it up.

“And, hopefully, we’ll roll it in with the blessing of the city,” she said. “Real Villagers really care about the tiles,” she maintained.

Berke noted that the bus could also be a resource during emergencies since it has a P.A. system and TV screens.

“My next move is to bring in a solar generator,” she said. “It could be a solar-powered command station in an emergency.”