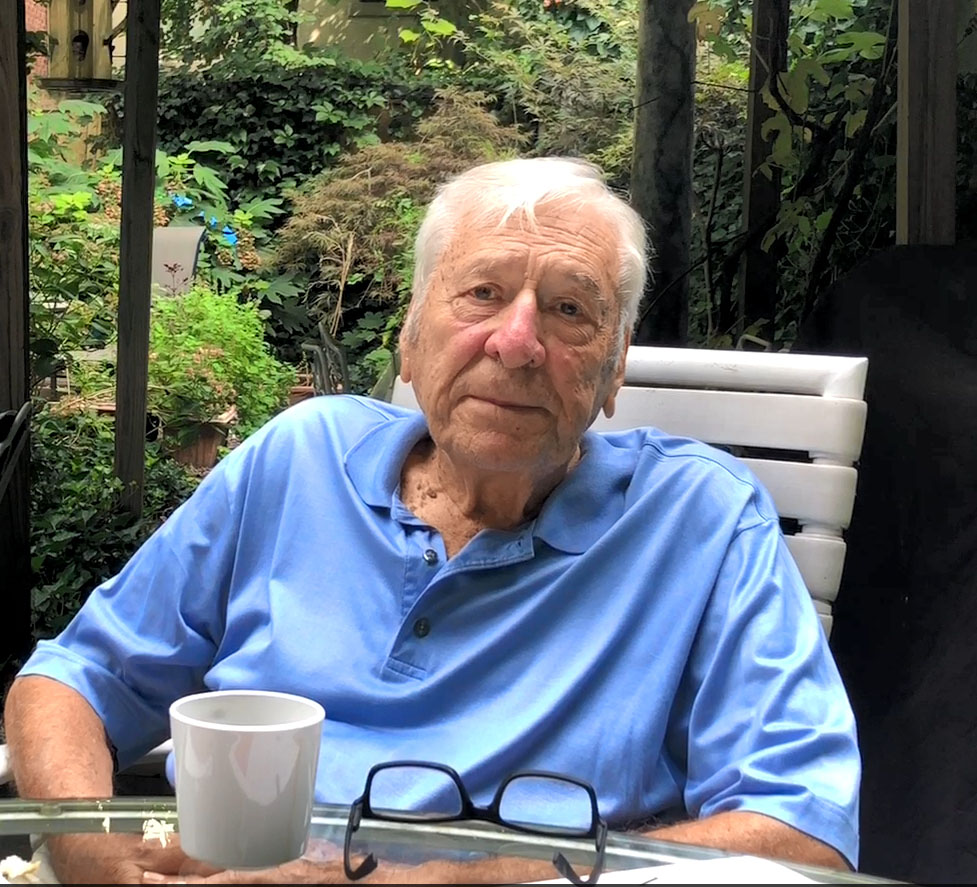 George Capsis in his garden two years ago. (Photo by Karen Rempel)

WestView News publisher furious at surprise takeover: ‘We are talking to a lot of lawyers’

BY LINCOLN ANDERSON | George Capsis had just been asked how he felt about a new newspaper, the New WestView News, having been published by the former staff of his own paper, WestView News, and being led by one of his former contributing columnists, local District Leader Arthur Schwartz.

“Ha! Ha! Ha!” Capsis laughed into the telephone. “That would take about an hour and a half to respond to.

“You know, in a battle, when you’re attacked, you suddenly set up several different strategies,” he said, “and we’re working at all of those.”

Capsis, who turns 95 this month, didn’t go into detail about any of those strategies. But he did note that he has been meeting with multiple lawyers. In fact, he was set to meet with two attorneys in separate appointments Thursday afternoon.

“I’m waiting now for a lawyer to show up,” he noted, speaking from his Charles Street townhouse. “This is not the first time; we had one yesterday.

“What do I think of it?” he asked The Village Sun of the brazen breakaway newspaper move. “What if he had done it to you?”

Schwartz claims he had a legal agreement with Capsis that, under certain conditions, allowed Schwartz to assume control of the corporate entity that is WestView. However, Capsis said that, after spending several hours studying the agreement, he feels that Schwartz “no longer has a legal right” to assume control of the newspaper. Though, he did add, “He did have it at one point.”

Asked if it was really true — as reported by The Village Sun, which heard it from a friend of Capsis’s — that he planned to go to the 6th Precinct to report a criminal theft of the Village monthly newspaper, Capsis confirmed, “Yeah, that was my first instinct.”

However, he apparently actually did not do that.

“But we are talking to a lot of lawyers now,” he assured. “We’re trying to do this intelligently.”

Nevertheless, the situation has made him very emotional. In a front-page note to readers, the New WestView News staff has asked Capsis “to join his old staff once again” — at the new newspaper. But Capsis isn’t interested.

“If Arthur came in here, I’d punch him in the nose,” he declared.

Others, too, are angry about the community newspaper “coup,” he said.

“We have a lot of important people,” he said. “Sarah Jessica Parker is outraged!”

At this point in the conversation, Capsis said Dusty Berke, WestView’s new managing editor, was advising him not to say too much. But Capsis continued on.

“Well, I’m in charge of the paper,” he said, firmly. “She put her name on it,” he said of Berke, who last month assumed her current position on the masthead.

Asked if WestView News will publish a December print issue, he said, “Yes, of course we are. Obviously, it’s late.”

Capsis spoke proudly of WestView, which he launched around 20 years ago and which has become a staple for many loyal readers in the Village area.

“It is a very good paper,” he declared. “It got to be pretty good because we had some good people writing very good and factual articles. The paper is successful and it gets advertising, and people love it, and it could get better.

“God willing, on the 20th of the month, I will be 95 years old. And I feel perfectly confident to continue to turn out a very good paper.”

Capsis then shifted back to Schwartz. He noted how the activist Village attorney had represented the publisher in his high-profile run-in 10 years ago with a 6th Precinct cop who punched him in the face in the Bleecker Street bike lane.

As Capsis recalled it, he was biking and was cut off by a police van.

“Then we stopped,” he said. “I was taking my bike past the passenger window, and I said, ‘You know, you cut me off. You could have killed me.’”

As Capsis tells it, one of the officers then ordered him, “Get off the bike.” Capsis, however, said he was offended that the officer was not looking at him as he gave the command.

But Capsis said he was trapped between the van and the bike and was unable to move.

“I said, ‘I can’t step away from the bike,’ and I got furious, and I stepped forward and I slapped him,” he said. “I slapped a policeman. And he finally looked at me. And he hauled back with all his force and hit me, and he broke my glasses.”

Capsis noted that, ironically, just a few days earlier he had met in his garden over wine with Brandon del Pozo, the then-commanding officer of the 6th Precinct.

“And he was very intellectual and he wanted to be police commissioner,” he recalled. “He called me and said, ‘George, you can’t slap policemen.’”

Capsis also once slapped state Senator Brad Hoylman in the face at a rally to save St. Vincent’s Hospital. The publisher felt local politicians weren’t fighting hard enough to save the debt-ridden hospital from closure. Restoring a full-service hospital to Greenwich Village has been one of Capsis’s top issues at WestView.

Long story short, Schwartz represented Capsis in suing the New York Police Department over the bike lane incident. At court, Schwartz stepped out of the room along with the attorney representing the city or N.Y.P.D., and they settled the case for $80,000 for Capsis.

“Arthur is a complex person because he has a complex life,” Capsis reflected. “I’ve always been sympathetic to him. … What he did [in launching New WestView News] was so damaging, so unnecessary. If Arthur was here right now… .”