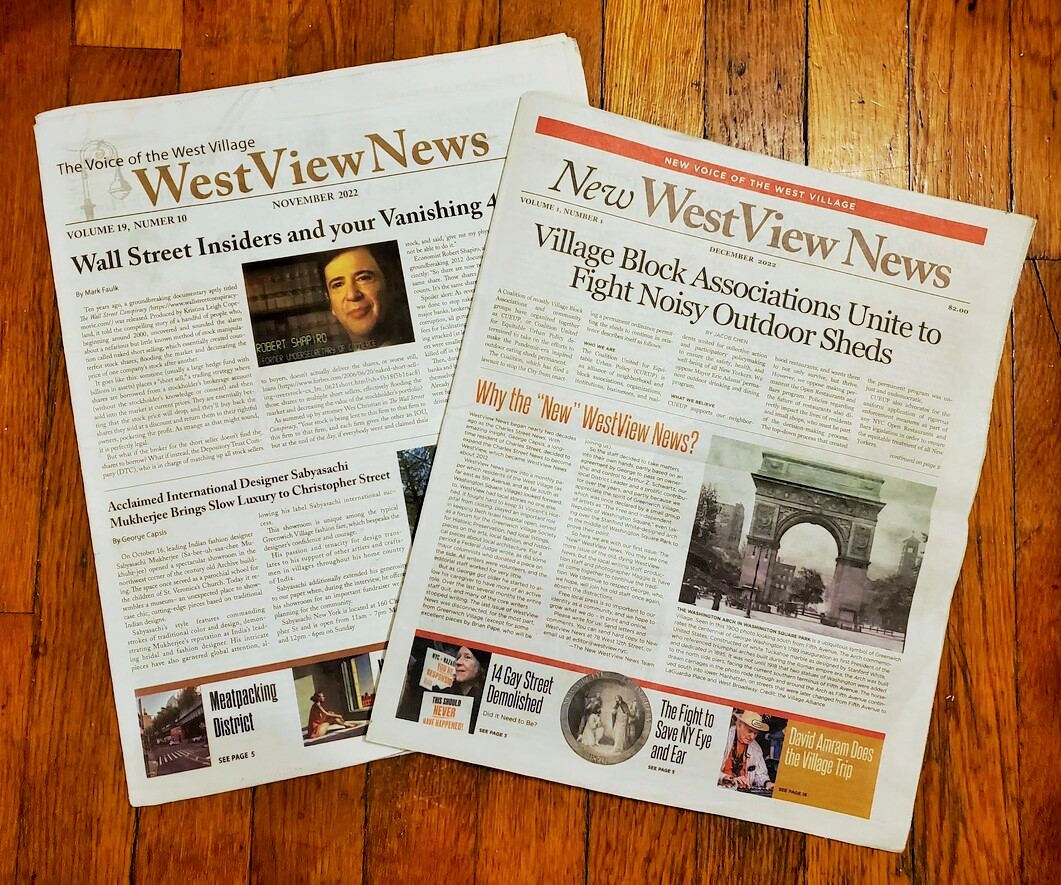 No, it’s not the latest Netflix or HBO series about badly behaving royals fighting for power, either contemporary or á la “Game of Thrones.” It’s the struggle, in fact, for the heart and soul of WestView News, one of Greenwich Village’s monthly community newspapers.

George Capsis, who is now 95, founded WestView about two decades ago and has run it out of his Charles Street townhouse ever since. However, most of the core staff and a number of contributors, after reportedly recently becoming disaffected with management, have departed the paper en masse.

Now, this breakaway group, under the leadership of Democratic District Leader Arthur Schwartz, who was a regular WestView contributor, have launched a new version of WestView News called, wait for it…New WestView News.

In terms of design, the new print newspaper looks remarkably like the old one. Its first issue, which published on Dec. 2, is 24 pages compared to the last issue of WestView, which published in early November and was 40 pages.

Schwartz is listed on the New WestView News masthead as senior editor. Kim Plosia, who was a key cog at WestView as its editor the last four years, is listed as New WestView’s managing editor and art director. Brian Pape, who was the workhorse “architecture editor” for WestView, is listed as a contributor at the new paper, but no articles by him appear in the first issue.

Meanwhile, Dusty Berke — who is Capsis’s caretaker — was listed on WestView’s masthead last month as the paper’s managing editor and art director, assuming the roles previously occupied by Plosia.

Raising some eyebrows, last month’s issue of WestView featured a full-page op-ed “advertorial” by Diane Sare — a longtime top associate of prominent conspiracy theorist Lyndon LaRouche — who was running for U.S. Senate versus Chuck Schumer in the general election.

Meanwhile, a note on the upstart newspaper’s front page, entitled “Why the ‘New’ WestView News?” signed by the “The New WestView News Team,” explains the reasons behind the move.

“The last issue of WestView News was disconnected, for the most part, from Greenwich Village (except for some excellent pieces by Brian Pape, who will be joining us),” the note states, in part. “We continue to respect George, who, we hope, will join his old staff once again, absent the distractions.”

Schwartz wrote several articles for the first issue, as did filmmaker Roger Paradiso. The paper also picked up a few articles from the Washington Square News, the student newspaper of New York University. There are also pieces by Public Advocate Jumaane Williams and Andrew Berman, the director of Village Preservation.

Schwartz told The Village Sun that he owns 1 percent of WestView and that, under an agreement, he is empowered to take over the newspaper’s corporate entity under certain conditions pertaining to Capsis’s health.

“[He’s] not the powerhouse he was,” Schwartz reflected, “the guy who at 88 slapped a cop in the face when the cop was abusing him, at the cost of getting slugged in the face by the cop.”

According to Schwartz, the name “WestView” is not copyrighted by Capsis, and a number of other business entitites are or have been named either WestView or Westview. The Village Sun was not able to immediately confirm that.

“I told George that everyone would come back [to WestView] if Dusty had no role in the paper,” he said.

It’s long been known that both Schwartz and Berke have separately been angling to get full ownership of the newspaper.

The Village Sun has reached out to Capsis and Berke for comment.

Berke lives in Capsis’s building, which is reportedly currently valued at $7.1 million. She also owns the Tiles for America RV that is always seen parked at Mulry Square, at Seventh Avenue South and Greenwich Avenue.

Meanwhile, W. Russell Neuman, a professor of media technology at New York University who has written a half-dozen pieces for Capsis at WestView, said he spoke to Capsis on Tuesday via e-mail.

“A battle for the control of a newspaper sounds like the good old days, Hearst, Pulitzer, Chandler — who had people beat up the paperboys in L.A. over distribution,” Neuman said. “Both Capsis and Schwartz are bigger than life. George told me he’s ‘going to the police station tomorrow.’ Great stuff.”

Told about that, Schwartz asked, “He’s going to the police?”

As of this article’s posting, WestView News had not published a December issue.