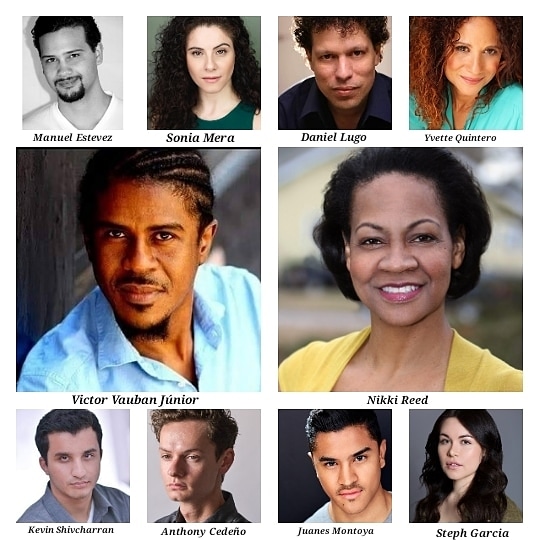 BY CLAUDE SOLNIK | Victor Vauban Jr. has quite a varied résumé, ranging from actor to director to circus performer and circus instructor. But his latest work replaces aerial acrobatics with verbal acrobatics in a timely story about culture clash and both a geographic and psychological journey.

Theater for the New City Executive Director Crystal Field is presenting “Brother Soy,” Vauban’s new play and a dramatic meditation about family, immigration and transgenderism in America, through Dec. 15.

Vauban wrote and directs this show, set in Spanish Harlem in the 1980s, with a cast of eight portraying the Montenegro family. Nikki Reed is stage manager, light operator and consultant.

“Brother Soy” looks at how transgenderism impacts a family and how differences can both divide and unite, as culture and prejudice clash with the bonds that hold families together. Tickets are $18, $15 for seniors and students.

An actor, writer, director and circus performer and instructor, Vauban as playwright uses language, love and drama to draw audiences into a world where his characters engage in their own delicate balancing acts.

“ ‘Brother Soy’ is an attempt to start an honest conversation about true nature of human beings, appearances and how we see and feel about one another in these convoluted days we are living in,” Vauban said. “We are continuously falling into social traps and we don’t know how to get out of them.”

In “Brother Soy,” two preteen brothers, Daniel and Pablo (Juanes Montoya and Anthony Cedeño), are separated after their parents’ divorce.

The older brother is taken by his father, Luis (Manuel Estevez), to live in South America, where their father dies fighting in a civil war. The brothers lose contact only to be reunited decades later in very different times, but also as very different people.

“Twenty-two years later, the older brother Daniel (Daniel Lugo), now a religious man, finds the means to return to America and reconnect with his long-lost family,” Vauban related. “To his despair, his mother (Yvette Quintero) is dead and his once-beloved brother (Sonia Mera) is now a transgender woman.”

A culture clash follows, spanning geography, ideology and identity, as members of the same family come to terms with their very different lives, leading to drama, decisions and a meditation on how we handle differences.

“The man does not understand the new America and finds himself in another war trying to revive the relationship with his once-beloved brother,” Vauban continued.

He presents the Montenegro family and their conflicts in a way that illustrates how quickly chaos can arise when people have trouble understanding one another.

“As a dramatist, I seek to take the audience on a journey of reflection and introspection by looking at how we have been acculturated to see one another as others,” Vauban said. He further called the play “a meditation on the nature of the crimes perpetrated against minority communities, and our participation or lack of participation in the criminalizing processes.”

Vauban was born and raised in Brazil and spent more than two decades traveling that nation and the world as a member of a circus, developing a singular perspective on the globe, society and entertainment.

“For many years, I worked as a circus performer and left the big top to pursue my education and keep working as a circus instructor,” he added. “I worked for the social circus program of the Cirque du Soleil in underprivileged communities working with endangered youth.”

He began writing plays at Manhattan Borough Community College, under the tutelage of Mario Giacalone, program coordinator at the time, entering his work in festivals around New York City.

Vauban still works as circus instructor in summer camps around New York, viewing circus not simply as a type of entertainment, but as a way to see and interact with the world as anything but mundane.

“I teach circus as a tool that we believe can help youth in endangered neighborhoods to see the possibilities beyond limitations imposed on us,” he said.

More information is available at theaterforthenewcity.net or by calling 212-254-1109.