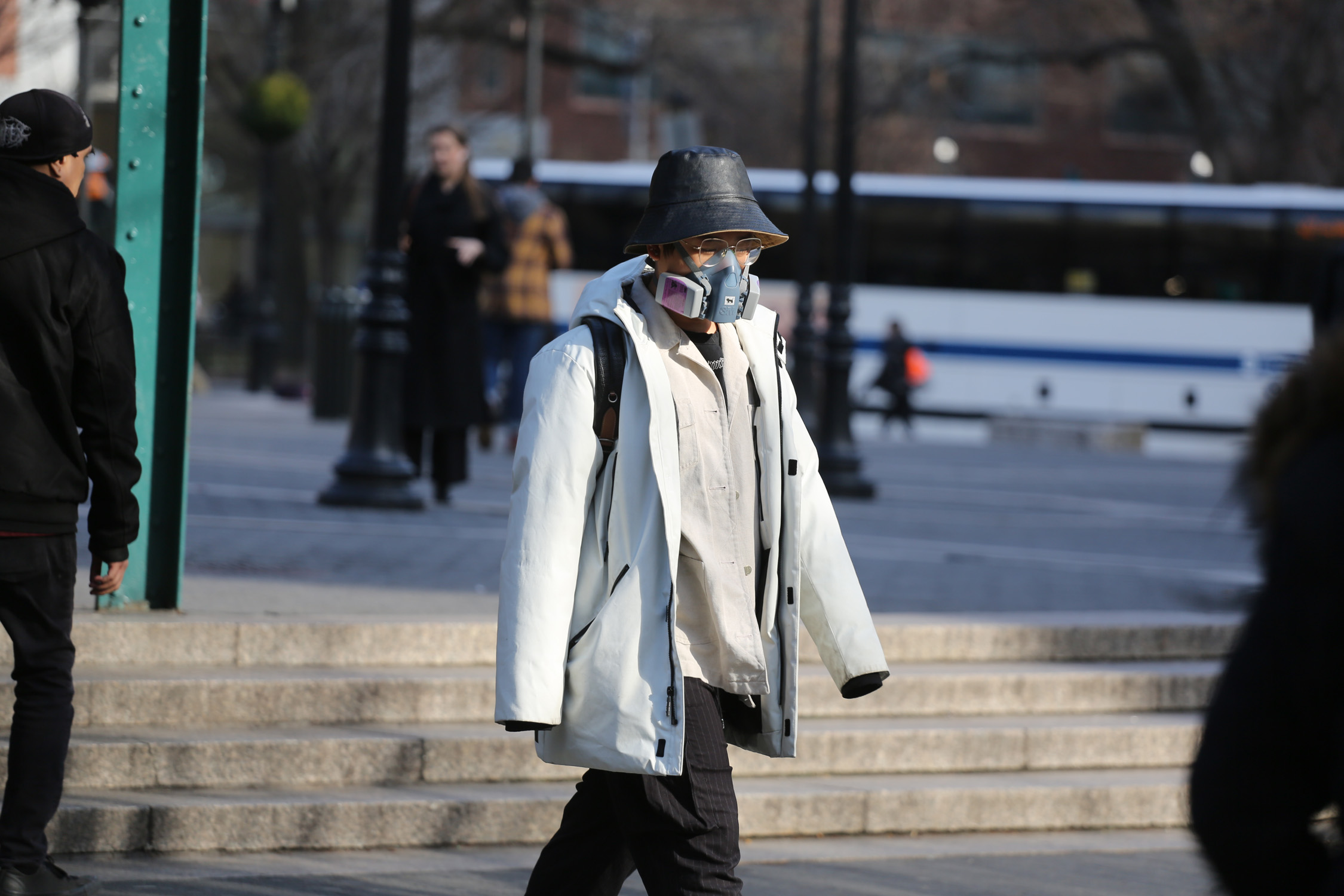 A man wears a respirator at Union Square. (Photo by © Jefferson Siegel)

BY THE VILLAGE SUN | Updated Thurs., March 12, 1:30 p.m.: As concern over coronavirus continues to climb, so do cancellations of events and closings in the Downtown Manhattan area.

The Village Sun has learned that the Sixth Precinct has called off its annual memorial ceremony for Auxiliary Officers Yevgeniy (Eugene) Marshalik and Nicholas Pekearo, who were slain by a crazed gunman in 2007. The memorial, which always includes the two men’s family members, had been planned for Saturday at 4 p.m.

The two auxiliaries, who were unarmed, responded after the gunman fatally shot a pizzeria worker on W. Houston St. and were, in turn, themselves killed at Bleecker and Sullivan Sts. before police gunned down the murderer.

“A lot of people go to that memorial, a lot of chiefs are there. It’s a big event,” a Sixth Precinct auxiliary source said.

And word among police was that it was “50/50” whether the city’s St. Patrick’s Day Parade would occur.

“They’ll wear gloves and use hand sanitizer,” the source said of the tentative plan for cops at the parade.

But Governor Cuomo ultimately decided to pull the plug on the 258-year-old celebration “due to the high density and and the large volume of marchers and spectators who attend.”

In addition, a fundraiser for Assemblymember Yuh-Line Niou’s reelection campaign that had been planned for Thursday was canceled.

Meredith Starkman, the Lower Manhattan / Lower East Side politician’s campaign director, sent out an e-mail to the RSVP list on Tuesday, saying, “Unfortunately, because of the spread of COVID-19, and the recommendations made by the [Centers for Disease Control and Prevention], our hosts for the evening have chosen to postpone the fundraiser. We will contact you as soon as we have the new date… .”

At Westbeth Artists Housing, everyone received a memo from the Westbeth Artists Residents Council urging them to stock up on two weeks worth of food and medication, the same way they prepared for Superstorm Sandy in 2012.

On Tuesday, residents also received a memo from management about not loitering in the lobby. It basically told residents to “just do your business and leave,” a Westbeth resident told The Village Sun.

“There is a Purell dispenser by the main elevators,” she added. “A film scheduled for this Friday in the community room was canceled. There is info from the C.D.C. posted all around the building. And I think Westbeth has increased the cleaning of the elevator buttons and other common areas.”

As new reports say that coronavirus can live on surfaces for days, everyone is obviously worried about touching things in public.

“Everyone here is using their knuckles or their phone to press the elevator button,” the Westbeth resident said.

Westbeth, a full-square-block complex of nearly 400 affordable apartments at Bethune and Washington Sts., is a Naturally Occurring Retirement Community, or NORC. That means it has a substantial number of residents above age 60. Coronavirus is said to be particularly dangerous for people over age 70 with underlying medical conditions. However, Mayor de Blasio has been saying that it’s people over 50 who are at greater risk.

A source also said a Meatpacking District art gallery has closed down for the immediate future following an employee testing positive for coronavirus.

So far, local Community Boards 2 and 3 have not taken the step of canceling any meetings. As of Wednesday night, neither board’s Web site mentioned anything about coronavirus or calling off meetings.

Meanwhile, as the reality of the fast-spreading pandemic starts to sink in, the NBA has suspended its season until further notice and President Trump has suspended travel from Europe to the U.S.

Amid all the uncertainty, Manhattanites have been stocking up on food and supplies at supermarkets. A bit north of the East Village, at the Fairway in Kips Bay, two huge lines snaked all the way through the store and moved at a snail’s pace.

One senior woman waiting in line said she was mainly buying food that she “could freeze.” She complained that Governor Cuomo and Mayor de Blasio surely must know more about what’s going on than they’re telling us. At the same time, she said, the media keeps hyping the supervirus story because “it sells.”

“Take a photo of that,” she suggested, nodding toward empty shelves in the section for paper towels and toilet paper, which has become a hot commodity during the corona crisis.

Nearby, at the Bottlenose wine store, a salesman said he’s noticed more people are ordering from home than buying inside the shop, but sales are not dropping off.

“People find wine comforting at times like this,” he reflected.