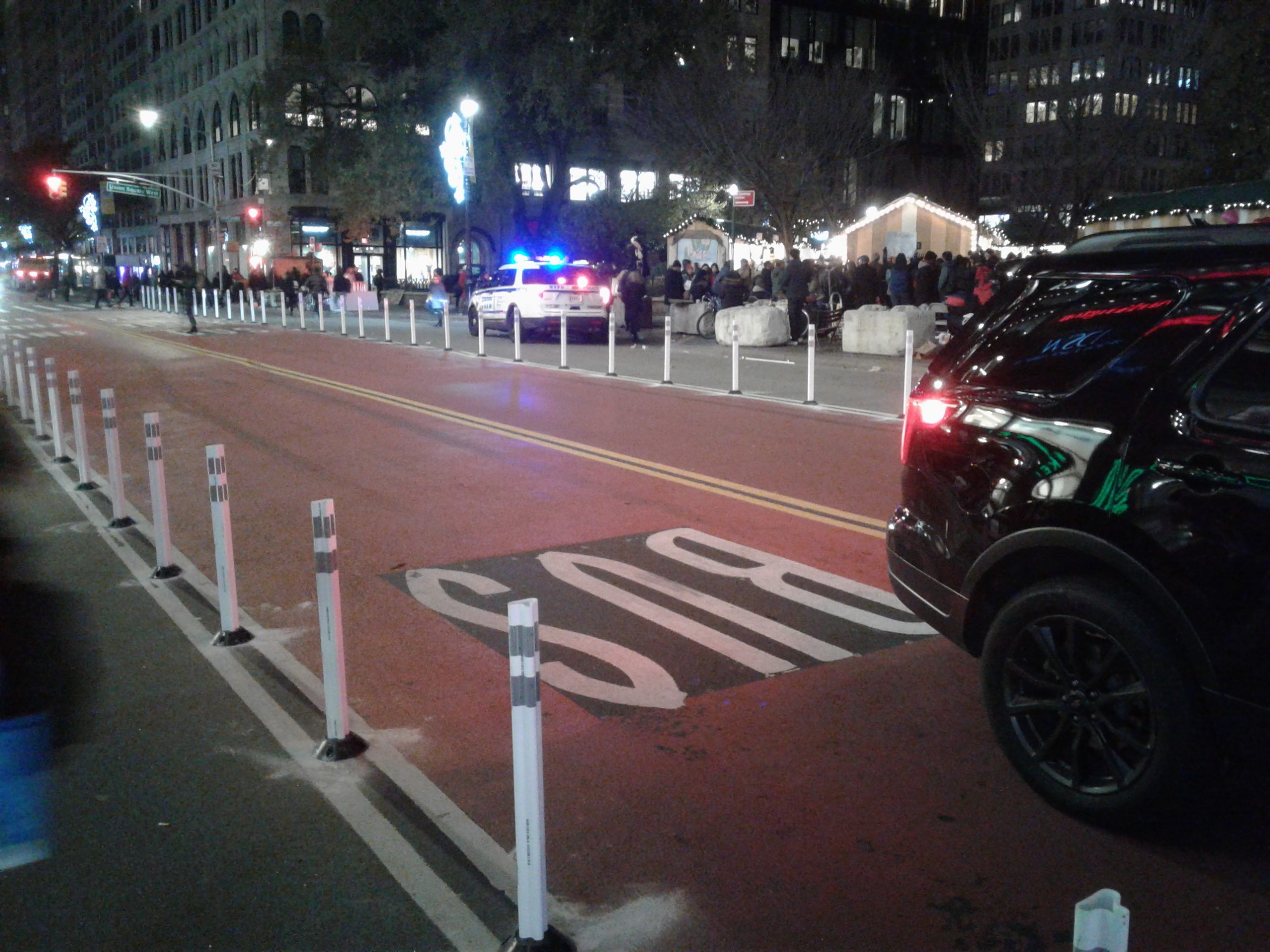 With new sidewalk extension areas, 14th St. at Union Square has been narrowed to one lane of moving traffic in either direction. (File photo)

BY THE VILLAGE SUN | A man was struck by a truck on 14th St. at Union Square late Saturday afternoon and was reportedly very seriously injured, according to police.

A police spokesperson said the pedestrian, a 50-year-old homeless man, was hit around 5:05 p.m. between Union Square East and Union Square West. The victim was crossing midblock — meaning not in a crosswalk — when he was hit by the passenger-side rearview mirror of a box truck traveling eastbound.

According to the police report, responding officers found the man lying “on the pavement” — it wasn’t clear if that meant in the street or on the sidewalk — with severe head trauma. He was removed to Bellevue Hospital in critical condition.

The driver, also 50, who was from New Jersey, remained at the scene and has not been charged with any criminality at this point.

It wasn’t clear from the police report if the victim had been crossing 14th St. from north to south or vice a versa.

The spokesperson did not have any information on the man having been released from the hospital. He said if the victim had died at Bellevue, police would have been told.

Gail Fox, a Union Square-area activist, notified The Village Sun of the incident. She said a friend texted her after it happened and told her police had closed off the block of 14th St. at Broadway and that “there was a truck across from Whole Foods.”

Wanting to find out more about what happened, Fox attended Tuesday night’s 13th Precinct Community Council meeting. Police did not bring up the subject on their own, but when Fox questioned them about it, they filled everyone in.

Fox, in turn, relayed to The Village Sun what the police shared.

“The guy was jaywalking,” she said. “He was hit by a truck. They didn’t say much about the individual. He was not crossing legally and was seriously hurt. He was not looking both ways. Commander Hellman said the victim is not doing well.”

She added that police also told the meeting that officers have been handing out fliers to pedestrians at the location about how to cross the street safely.

Since early October, 14th St. between Third and Ninth Aves. has been transformed into a busway pilot project, which is set to last for 18 months. The major Downtown Manhattan crosstown boulevard now often seems quiet and deserted due to the daily car ban from 6 a.m. to 10 p.m. That makes it easy for pedestrians to cross the street any time — at crosswalks or not, with or without the light — and so can lull people into a false sense of safety, Fox said.

“I definitely feel that all the time and it definitely concerns me,” Fox said of the street’s deceptive emptiness. “I will not be jaywalking.”