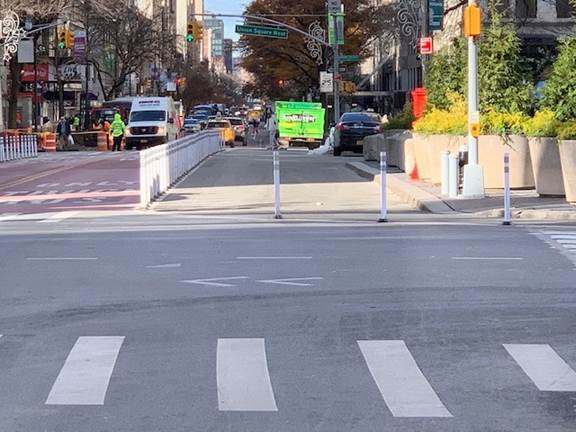 BY LINCOLN ANDERSON | A new pedestrian space at Union Square is finally actually much safer for pedestrians after a trio of flexible plastic delineators were installed on Wednesday. But it took a whole week!

On Nov. 23, the Department of Transportation permanently extended the pedestrian space on the south side of Union Square into the street’s westbound curb-side lane. A row of flexible plastic delineators was installed to cordon off the new space, which was also painted beige to set it off from the street.

But, as The Village Sun first reported on Dec. 1, local activist Paul Mulhauser raised the alarm to Ed Pincar, D.O.T. Manhattan borough commissioner, on Nov. 25 after seeing a Metropolitan Transportation Authority bus driving through the pedestrian area — which, to Mulhauser’s astonishment, was not blocked off to traffic at its eastern end.

“Bus on wrong side of delineators!!!!” Mulhauser titled his e-mail, writing, “OMG! Please have bus drivers informed that delineators are intended to protect pedestrians!!!!????”

Pincar promptly responded to Mulhauser, assuring him D.O.T. would “reach out to NYCT” (New York City Transit) about keeping its buses out of the pedestrian space. But Mulhauser e-mailed him back that either a large granite block or delineators were also needed to keep traffic from entering the space in the first place.

Five days later, on Nov. 30, Mulhauser found himself back in panic mode once again when he spotted a pickup truck racing through the pedestrian space, sending walkers scattering. He fired off an e-mail to D.O.T.’s Pincar again, plus this time also CC’d Council Speaker Corey Johnson’s office.

“Hi Ed,” Mulhauser wrote, “I just stopped a large NJ pickup truck driving west on [the] south side [of Union Square], unaware that he was on a pedestrian way, even though people were having to dodge out of the way! Please fix!”

This time, however, he didn’t get any response.

Frustrated at not hearing back from D.O.T., on Dec. 1, Mulhauser reached out for help to The Village Sun. The paper, in turn, reached out to both D.O.T. and Johnson’s office.

But Johnson did, telling Downtown’s new one-month-old paper that while Union Square is “starved [for] adequate pedestrian space,” the new space must also be safe. Word was that Johnson would then reach out to D.O.T. about the situation and “continue to monitor it.”

Apparently, The Village Sun’s inquiry to Johnson, prompting him — or a staffer — to reach out to D.O.T., got results, and quickly.

Two days later, the three new delineators were installed at the new pedestrian space’s eastern end. A gap was left open for the pedestrian crosswalk and emergency vehicle access, but hopefully the new delineators will be a sufficient visual deterrent to keep buses and trucks out.

In fact, D.O.T. very closely followed a diagram that Mulhauser created and sent to the agency in his e-mail on Nov. 30, urging that his safety scheme be implemented.

In the end, it’s a good outcome but could have been better, the local activist noted.

“Four — or even five — delineators would have been better,” Mulhauser said. “But hopefully three should otherwise save a few lives.”

Asked if he was happy about the quick response after The Village Sun flagged the issue in its article, Mulhauser said, yes, but added he was not pleased it took an entire week for the city to address the problem.

“I was disappointed that it took a second incident and my second more explicit request, five days after the first, and a statement from Corey…before action was taken,” he said. “However, I’m pleased that actions were taken to hopefully avert an otherwise imminent incident.”

Also, Mulhauser said the situation still hasn’t been totally rectified, because the street stencil on the lane on the other side of Broadway leading into the new pedestrian space also must be removed.

“The lane heading directly into the pedestrian space remains boldly painted BUS TRUCK ONLY,” he noted.

While the new delineators have helped solve a safety issue at Union Square, elsewhere along 14th St., new bus-stop extension platforms are creating yet another risky situation. According to a report on NY1, it turns out that the new hollow-rubber platforms freeze over in icy rain and snow faster than sidewalks, making them slippery and dangerous.

Mulhauser is a member of the 14th St. Coalition, an ad hoc group of Village and Chelsea residents who oppose the new 14th St. busway. Like other locals, he is concerned about the newly created slip hazard at the high-speed Select Bus Service stops. Fortunately, the snowfall earlier this week didn’t really accumulate.

“It’s only just the first dusting of snow since they started to install seven platforms along 14th St.,” Mulhauser said. “Let’s see how they do through the winter.”

The platforms will also have to be shoveled — by someone — in the event of snowfall. Whereas residential and commercial buildings are required to shovel their sidewalks, it’s not clear who would do this for the new bus platforms.