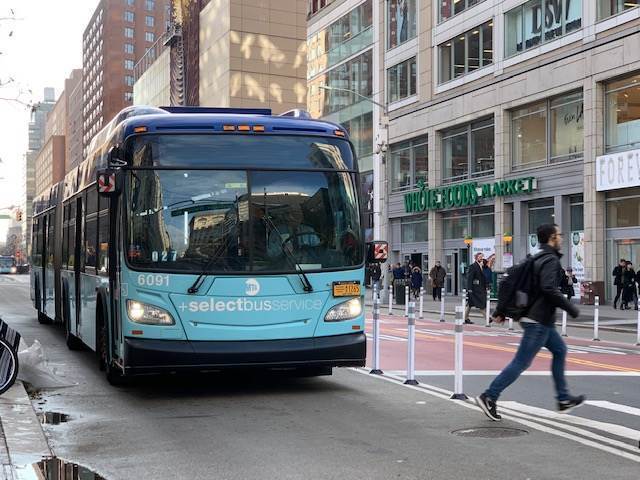 Above, a pedestrian skips out of the way of a rogue bus rumbling through the brand-new pedestrian “safe space” south of Union Square on 14th St. on Nov. 25. (Photo by Paul Mulhauser)

BY LINCOLN ANDERSON | Updated Tues., Dec. 3, 1:15 a.m.: A change on 14th St. allegedly to increase pedestrians’ safety is instead putting their lives in danger!

The Department of Transportation recently permanently expanded the pedestrian space south of 14th St. at Union Square by expanding it into a lane of westbound traffic.

In addition, vehicle traffic has been barred from one lane on each side of the street, shrinking moving traffic down to just a single lane in either direction on the major crosstown artery. Under the new busway pilot program, the street is now mainly being plied by buses and trucks from 6 a.m. to 10 p.m. every day.

The new pedestrian spaces have been painted beige and marked off with flexible plastic delineators.

But someone needs to tell bus and truck drivers about the change!

Paul Mulhauser, a member of the 14th St. Coalition, said he noticed on Mon., Nov. 25, just after 9 a.m., that a Metropolitan Transportation Authority bus was motoring right through the new “safe” pedestrian space on 14th St. south of Union Square.

Mulhauser promptly fired off an e-mail to Ed Pincar, the D.O.T. Manhattan borough commissioner, with the panicked subject line, “Bus on wrong side of delineators!!!!”

“Thanks, Paul, we’ll reach out to NYCT,” he wrote back, referring to New York City Transit.

But Mulhauser, in turn, e-mailed Pincar back to say that’s not enough — that more must be done to ensure motor vehicles are kept out of the space in the first place.

“In addition to informing NYCT, DOT should also add delineators (or a block) across the approaching east end of that pedestrian space (at Broadway) to physically prevent incoming vehicles,” he urged the D.O.T. honcho.

However, Mulhauser hasn’t heard back from the borough commissioner since his response to the initial e-mail.

And while bus drivers, hopefully, now know the drill after D.O.T. reached out to Transit about it, no one is apparently telling truck drivers anything. Because five days later, on Sat., Nov. 30, at 4:19 p.m., Mulhauser spotted a truck barreling through the same new pedestrian space at Union Square. Springing into action, the local resident alerted the driver he was going through the wrong area.

Then the alarmed activist again fired off another e-mail to Deputy Commissioner Pincar:

“Hi Ed, I just stopped a large NJ pickup truck driving west on [the] south side [of Union Square], unaware that he was on a pedestrian way, even though people were having to dodge out of the way! Please fix!”

In short, nothing is currently keeping buses and trucks out of the new pedestrian space but beige paint and a white line on the street, creating the dangerous situation. The delineators run parallel to the lanes, but not perpendicular.

Buses and trucks approaching from the east are driving in either of two lanes marked “Bus Truck Only.” But Mulhauser said the markings in the uptown lane should be removed, since that lane — which is only marked that way for one block — “aligns” with the new pedestrian space and thus could make bus drivers think they could use the wide-open pedestrian space straight ahead of them.

Mulhauser added that there is also currently no barrier stopping traffic that is coming down Union Square East from turning right into the pedestrian safe space on 14th St.

He e-mailed Pincar again later on the evening of Nov. 30, shortly after 10 p.m., to emphasize that his two suggested changes be made ASAP: that delineators be added at the east end of the pedestrian space and also that the confusing “Bus Truck Only” markings be removed from the one lane.

“I’ve witnessed it twice since they installed the delineators only just a week ago on Nov. 23,” he said, though adding, “I doubt it only happens when I’m coincidentally walking by!

“First I saw and photographed an SBS 14 bus and yesterday a pickup truck from NJ,” he said. “I stopped the pickup truck and asked the driver if he knew he was driving on a pedestrian path — to which he replied, alarmingly, looking more carefully ahead, ‘Holy s—!’”

“This is very not well-thought-out,” he complained. “Vision Zero is zero thinking. Zero thought went into trying to make it work properly.”

D.O.T. did not respond to a request for comment.

The 14th St. Coalition opposes the street’s no-cars busway, which launched in early October. The group’s members fear the impact that the 18-month-long pilot plan will have on surrounding streets and lack of access along 14th St. Plus, they suspect the city intends to impose its will on the street and make the changes permanent, regardless of what local residents think. The Coalition was part of a previous lawsuit against the busway, but is not a plaintiff in a current suit against the plan, though some of its members are.

However, a fellow coalition member e-mailed Mulhauser that the pedestrian space still theoretically can be used for emergency-vehicle access, so maybe its eastern end should not be blocked to keep out traffic.

Mulhauser responded to the member with concern tinged with sarcasm:

“Yes, good point: Emergency vehicles do need access. Particularly should a pedestrian get hit by a vehicle mistakenly (or intentionally) driving on that dangerous beige-painted on-road pedestrian space (as we informed [D.O.T.] numerous times in numerous presentations and town hall meetings).”

He added that using flexible delineators for the barrier probably would be a better choice than a granite block.

“Clearly, concrete or granite barriers would exclude emergency vehicles [from driving into the pedestrian space],” he conceded. “However, DOT has informed [us] many times that rubber delineators are flexible to accommodate being driven over by emergency vehicles.

“The DOT’s job is to solve problems, not create them,” Mulhauser stressed. “Ed has now been advised three times in writing of a potentially life threatening condition that they’ve created. I also cc’d Corey and Eric on yesterday’s email, including attachments,” he said, referring to City Council Speaker Corey Johnson and his chief of staff, Erik Bottcher. “So any (now predictable) injury or fatality is regrettably on their back.”

In fact, this stretch of 14th St. is in Carlina Rivera’s Council District 2.

Asked about the dangerous situation, Speaker Johnson told The Village Sun, “The pedestrian areas south of Union Square on 14th St. are welcome improvements to an area that has been starved of adequate pedestrian space for too long. We should be doing everything we can to ensure that they are working as intended and that pedestrians remain safe from traffic in the area.”

According to a source, Johnson’s office has contacted D.O.T. about the problem and will continue to monitor it.

A representative for Councilmember Rivera did not respond to a request for comment.

Mulhauser said the south side (eastbound lane) of 14th St. at Union Square is not experiencing the same dangerous problem, since the pedestrian space there does not align with the designated bus lane, plus — due to the new busway — there are always traffic agents there directing drivers to turn off of the street onto now-Downtown-bound University Place.

Given the army of traffic agents assigned to the new busway, one would think some of them would be making sure buses and trucks don’t drive into the pedestrian space, too. But Mulhauser said, from what he’s seen, it doesn’t seem to work that way.

“However, their primary purpose along 14th St. is to force vehicles to exit at the right turns, with whistles, waving and yelling — otherwise to urge avenue traffic to keep going across 14th,” he noted. “I’ve never seen a single officer watching out for vehicles entering the pedestrian space along the south side of Union Square.”