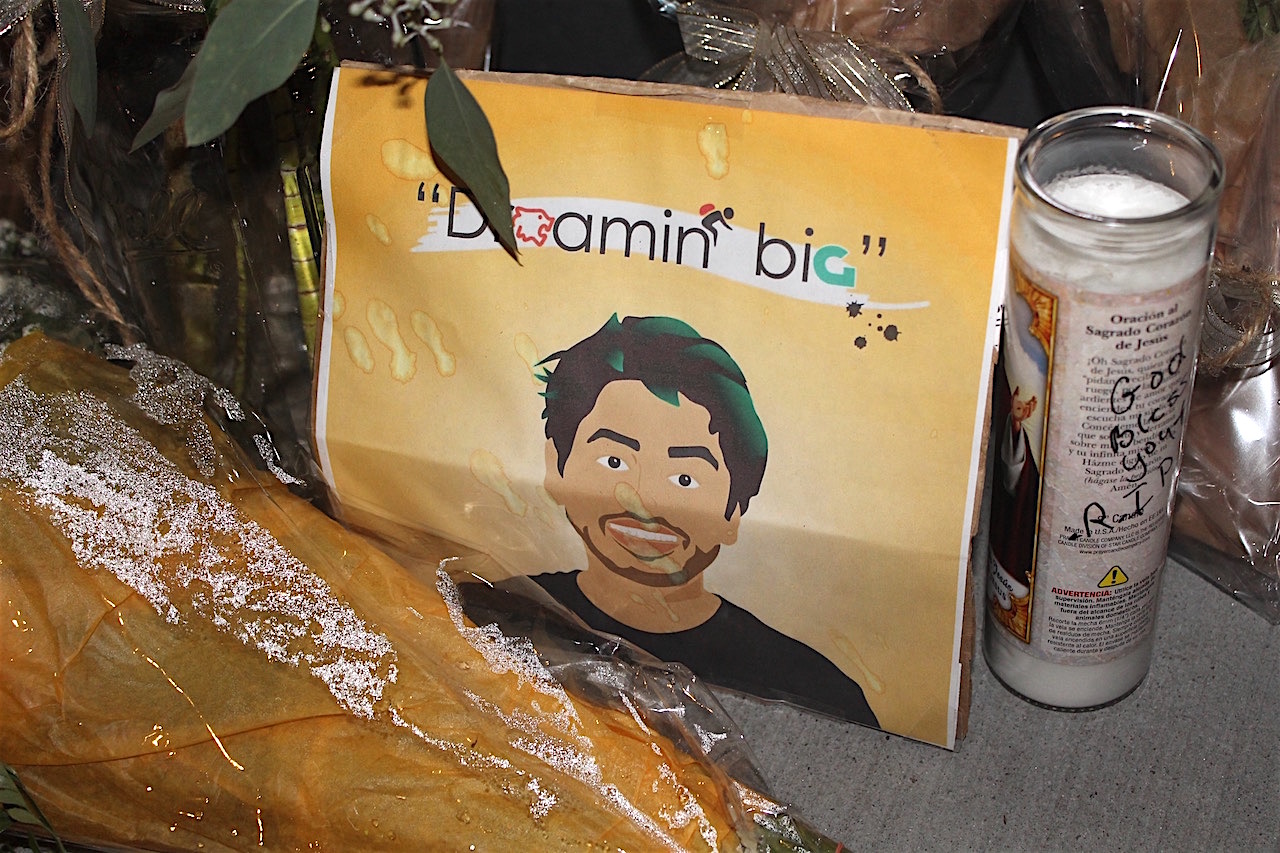 A picture of Fahim Saleh left at a memorial outside his building on E. Houston St. (Photo by The Village Sun)

BY THE VILLAGE SUN | He was just a super-nice guy.

Acquaintances of tragic ride-share C.E.O. Fahim Saleh said the young millionaire was always friendly and a pleasure to deal with.

Saleh’s alleged killer, his former personal assistant, Tyrese Devon Haspil, was collared Friday and charged in the brutal slaying and dismemberment of the rising tech mogul.

Saleh had reportedly caught Haspil stealing from him — embezzling up to $100,000. But instead of turning him in to the police, Saleh reportedly allowed Haspil to repay him on an installment plan.

Haspil was arrested at a loft-like Airbnb pad in Noho at Crosby and Bleecker Sts., which he footing with Saleh’s credit card, according to the New York Post.

Saleh’s easygoing nature and kindness was evident to two Lower East Side employees who spoke to The Village Sun on Saturday night.

Sam Parakal, 28, who works the nightshift at a smoke shop just a few steps east of Saleh’s luxury condo building, 265 E. Houston St., said the Gokada C.E.O. always swung by every night to buy a soda.

“He used to come here every day,” he said, while pausing from screwing together a hookah pipe. “He was a cool guy. He always came here to get a Coke bottle — a glass bottle, ‘Mexican Coke.’ I used to see him every day after 10 at night. I never seen him drink [alcohol] or smoke anything.

“One time during the pandemic, he said he was working from home. He never said he was a C.E.O.

“He was always just funny, kind of chill,” Parakal recalled. “He always changes his hair color — black, green and brown. Most of the time green — or black with gold streaks.”

Saleh once introduced his sister to him, he recalled.

According to reports, Saleh’s cousin initially found his butchered corpse on Tuesday. Police believe Saleh was killed Monday and that Haspil returned the next day to try to clean up the crime scene when he was interrupted by the cousin’s arrival, fleeing down the stairs as she was coming up in the elevator.

Parakal said he couldn’t imagine what it would be like for a person to find someone they knew so well murdered and chopped up.

“It would give her nightmares for days,” he said.

The general manager from Pause Cafe, around the corner on Clinton St., whisked in for a quick cold Corona after closing down the cafe’s outdoor seating for the night.

He said he had worked at the cafe 10 years and that Saleh stuck out in his memory. He said he had checked records and that the entrepreneur had been there several times, though might also have sometimes ordered takeout. Saleh liked tripe.

“Since he moved in, he came five times based on the register,” he said.

“I remember his face because he was too kind,” he said, using “too” in the sense of “very.” “Good energy, good vibe.”

He said Saleh usually came in with friends.

They both remembered that Saleh was often accompanied by his dog, a Pomeranian.

Jamaal Cameron, 25, a consultant who lives next door to Saleh’s building in the Sioné, shared his thoughts while stepping out to the smoke shop Saturday night.

He said he was so freaked out by the horrific murder that he actually flew to Chicago for a few days. At first he worried that the killer could have been a local person who would strike again. Cameron’s unit nearly abuts Saleh’s.

“Even if it was a professional hit, that makes it even more uncomfortable,” he said.

Parakal and Cameron both initially suspected there might have been a Nigerian angle to the murder — either government or business related — since that’s where Gokada, Saleh’s ride-share company is based. The business actually had recently transitioned to a “last-mile” delivery service.

Saleh was also involved in ride-share companies in Bangladesh and Colombia. He was doing well enough that he could afford to buy his swank Lower East Side condo for more than $2 million.

At one point, a police officer holding a black plastic bag walked up to the door of 265 E. Houston St. and waited to be buzzed in. Asked if police were still working the crime scene, he just shook his head no. Eventually, someone buzzed him in.

Next to the front door, on the sidewalk, was a memorial of floral bouquets, a votive candle and a picture of Saleh sporting his trademark green hair. Green was the color of the “G” logo and motorcycle helmets for Gokada.

The picture — which had been streaked by some raindrops — included two words: “Dreamin’ big.”