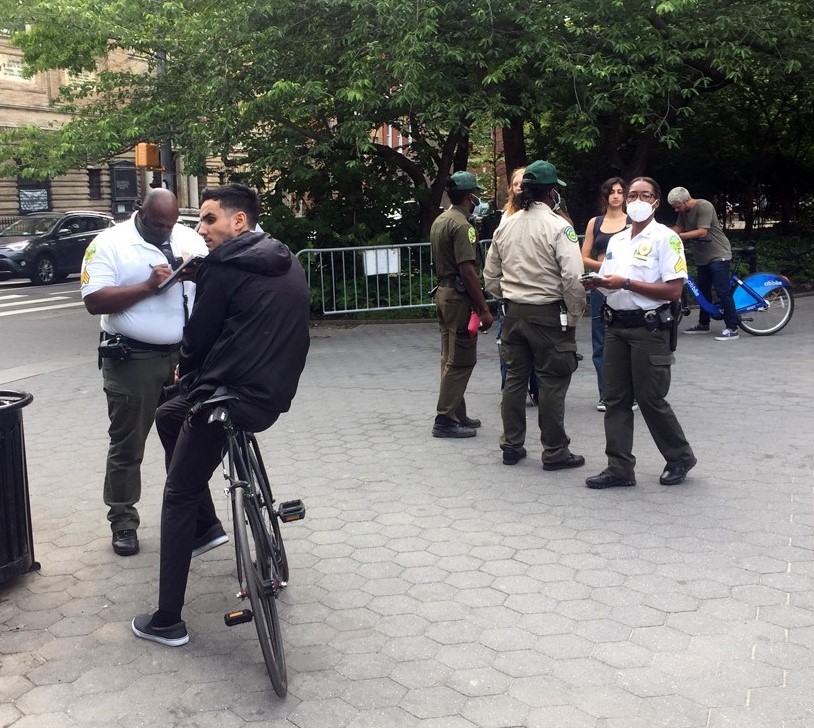 A PEP officer writes up a ticket for a cyclist in Washington Square Park as another PEP informs a skateboarder (mostly hidden from view) that skateboarding is not allowed in the park. (Photo by © Jefferson Siegel)

A bunch of cyclists got that deflating feeling Tuesday as they were slapped with at least $50 tickets for whizzing through Washington Square Park.

Meanwhile, skateboarders are reportedly still skirting tickets. They are being “schooled” on the park’s prohibition against shredding, but allowed to skate free of fines.

As seen in photos shared with The Village Sun, around 5 p.m. Tuesday, a trio of stopped cyclists were being written up by Parks Enforcement Police officers and a cop by the park’s south entrance at LaGuardia Place. A skateboarder and a pal were nearby, apparently getting a talking-to by PEP’s.

In total, there was a dragnet there of about six PEP officers and at least one police officer.

“The ’boarders were really young and looked kind of stunned/surprised,” a witness reported. “The cyclists kind of looked like, ‘O.K., ya got me.'”

Although the enforcement was going on at the park’s south entrance Tuesday, cyclists and skateboarders were reportedly not being stopped at the park’s north end.

Neighbors have been raising an outcry over loud late-night noise and drugs in the park. Police, for their part, say there has been a group that is regularly refusing to respect the curfew at night and leave the place.

As a result, the police and Parks Department recently agreed to close Washington Square earlier than usual — at 10 p.m. — on Fridays through Sundays for the next few weeks. In addition, the park’s main drug spot, the northwest corner, is being fenced off for a few weeks.

Now it looks like Parks and the police are addressing another of local residents’ complaints — namely, bikes, skateboards and electric scooters being ridden illegally in the park.

However, it appears that while cyclists are facing actual fines, skateboarders might only be being “educated” about the park’s rules right now. That education involves a combination of new signage and talks from PEP officers.

In a statement to The Village Sun, Charisse Hill, a Parks Department spokesperson, said, “Our Parks Enforcement Patrol (PEP) officers are collaborating with N.Y.P.D. on efforts to educate parkgoers about skateboarding rules and increase enforcement. We’ve installed new signs at Washington Square Park that communicate these rules at every entrance.

Bicycling, though, is another matter.

“Failure to comply with bicycle riding restrictions in parks carries a penalty of $50 to $75,” she added.

In terms of issuing summonses to skateboarders, Hill explained that PEP officers’ first course of action would be to educate them about park rules. If the rules are not followed, then the next step would be to issue a summons, and only in extremely rare circumstances would there be an arrest.

The spokesperson also noted that the department has a number of dedicated skate parks throughout the city that skateboarders can use instead of Washington Square Park.

Megan Moriarity, another Parks spokesperson, added, “To clarify, we are collaborating with N.Y.P.D. on efforts to educate parkgoers about skateboarding and bicycling rules and increase enforcement in Washington Square Park. In April we increased education efforts, and this is now being followed by a period of increased enforcement.

The Village Sun in April first reported on the skateboarder education-followed-by-enforcement plan.

However, a local source close to the situation insisted that skateboarders are definitely not being ticketed yet — though adding that that could change.

In addition to laying down the park rules to skateboarders, some concrete steps are also being taken, literally — new planters are being installed in certain areas to discourage the skateboarders from grinding and doing jumps there.

Meanwhile, it was reported to The Village Sun that Monday night — which currently does not have an early closing time, unlike the weekend nights — saw more late-night partying in the park, which left it a mess come Tuesday morning. There was also vandalism — someone reportedly graffitied the arch. The landmark monument is made of porous marble that absorbs paint and can be a challenge to clean.