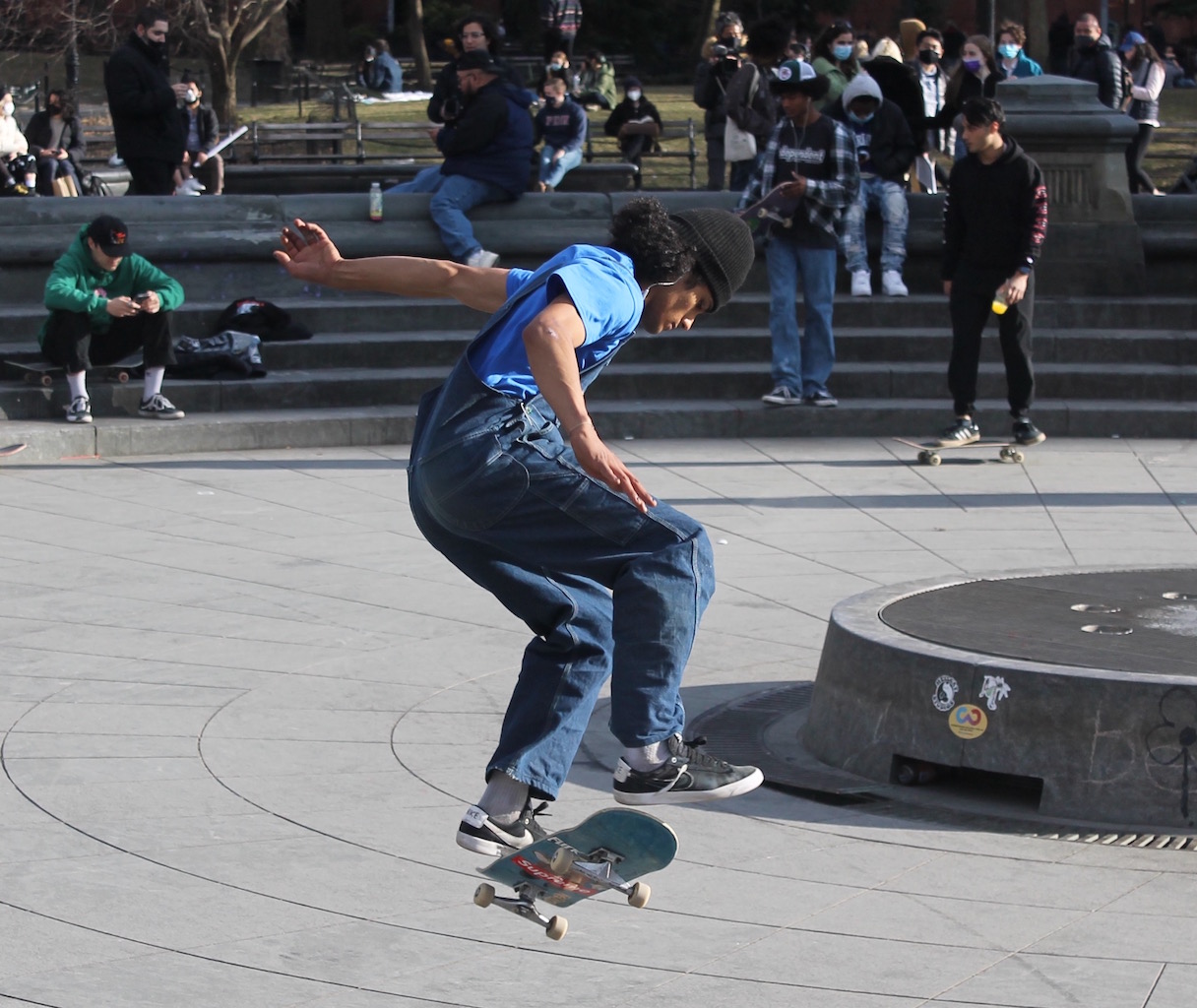 Skateboarders have been riding in Washington Square Park's dry fountain but this week the fountain was turned on. (Photo by The Village Sun)

Skateboarding enforcement to get rolling in Washington Square Park

BY THE VILLAGE SUN | It won’t involve a blackboard, but skateboarders in Washington Square Park will be getting an education.

Whether you love ’em or hate ’em, skateboarders’ freewheeling rein in the landmark Village park could be coming to an end.

The Parks Department is putting a “new initiative” into place. It sounds, though, like it would be wrong to call it exactly a crackdown. Rather it will be a more gentle approach.

The effort will start with a period of months of education about the park’s rules, but could eventually rise to giving out tickets and possibly even arrests.

A department spokesperson gave The Village Sun details on the plan.

“We continue working to address skateboarding in Washington Square Park,” she said. “Our Parks Enforcement Patrol (PEP) officers are collaborating with N.Y.P.D. on increased efforts to educate parkgoers about skateboarding rules in the coming months, which will be followed by a period of increased enforcement. We also plan to install new signs that communicate these rules.

“Our PEP officers’ first course of action is to educate parkgoers to our rules; if not followed, the next step would be to issue summons, and only in extremely rare circumstances would we effectuate an arrest.”

Skateboarding is prohibited in Washington Square Park. According to the Parks Department’s general rules, skateboarding is not allowed except where expressly permitted.

Per Parks rules: “No person shall roller skate, ski, skateboard, sled or coast or ride on any similar device outside areas designated and maintained for such use.”

And if a skateboarder rides in a way that “endangers any other person or property,” he or she could get slapped with a misdemeanor.

A police source said cops in the park tend to focus on issues like drug dealing, generally leaving skateboarding for the PEP officers to handle.

Luckily for skateboarders, though, Parks has a number of skate parks throughout the city. Tompkins Square Park, for one, has a big blacktop area that is dominated by skateboarders.

Asked why skateboarders gravitate to Washington Square Park, one young shredder said it’s because of its location, right by New York University, so a lot of young people hang out there. Also, she said, the park’s surface is pretty good for skateboarding.

In addition, along with the opening of outdoor pools and beaches this week, the fountain in Washington Square Park was turned on, so skateboarders won’t be able to ride inside the fountain.