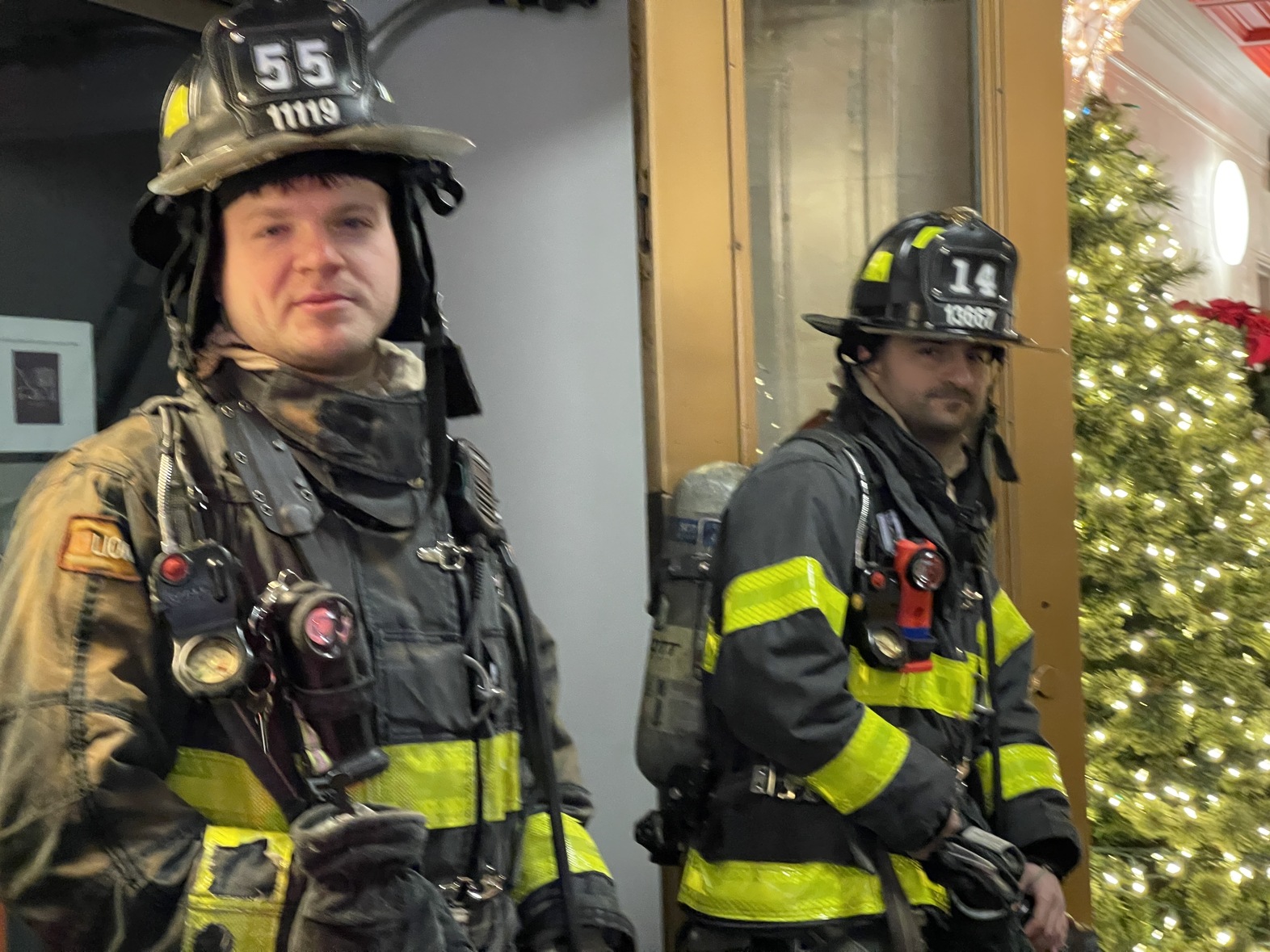 Firefighters on the scene at Westbeth. (Photo by Gayle Kirschenbaum)

The shock of a fire next door, a neighbor injured

BY GAYLE KIRSCHENBAUM | Saturday, December 17, 2022, was a surreal day. I was out doing errands in my ’hood, the West Village, and was walking home at around 2:45 p.m. I could hear the all-too-common sound of sirens and soon noticed several fire trucks heading in the direction of my building.

A few were stopped on Greenwich Street by my friend’s building. Concerned, I was about to call to check on her when I turned the corner at Bethune Street. I continued walking and noticed that the fire was in my building, Westbeth.

This wasn’t the first time this has happened in the years I have lived there. Previously, a tenant who was a hoarder turned her electric range on while papers were resting on it. I was living on the second floor then, facing Washington Street, and I remember vividly seeing out my window all the fire trucks arriving. She lost everything but gratefully got out in time.

When I arrived at my building, I saw other tenants and many firemen outside.

Stories started coming out, including how serious it was. The halls were filled with black smoke, people said; you couldn’t see and couldn’t breathe.

Being a filmmaker, a documentarian and a photographer, my instinct to start recording kicked in. I was conscious of not wanting to be intrusive, so from a distance I hit record. Looking at the firemen, I remembered being in first grade when the teacher went around the classroom asking what we wanted to be when we grew up and how many of the boys said a fireman. Having just gone to my 50th high school reunion I don’t believe any of them actually took that career path.

This wasn’t the first time I was filming firemen. Returning to my beloved New York after years away, just in time for 9/11, my camera back then captured three surviving firemen walking pantless in a daze carrying their jackets on the Hudson River path. They informed me they had lost all their guys.

As I watched these men in front of my home, Westbeth, this day all geared up from helmets to boots, I thought, what a brave and good-looking bunch.

Soon I learned the fire was on my floor. Then I heard whose apartment it was. A lovely elderly couple, I’ve known for more than 20 years. Two doors down from me. As I wondered if they were safe, a stretcher with my neighbor hooked up on oxygen whizzed by me. I imagined he must have been passed out from smoke inhalation and prayed he would be O.K. Out of respect for their privacy, I am not sharing their names.

I wondered about his wife. Was she O.K.? Was she in the apartment, too, during the fire?

Then I saw her outside uninjured walking and being guided by the firemen. They were taking her to the hospital where her husband was headed in the ambulance. She was not in or near the apartment during the fire.

People living in nearby apartments were evacuated. As I started talking to the firemen, I learned that they had to crowbar open several apartment doors when the tenants did not answer, to be sure no one was in them. Firemen are about saving people not property.

My neighbor is a gifted, prolific and successful artist. His apartment was all filled with his art. All was destroyed. Nothing was left inside their home.

Westbeth is an industrial building that was formerly Bell Labs. It was built in 1898. After Bell relocated to New Jersey, the abandoned building was renovated and opened in 1970 as what it still is today — a home and workspace for artists of all disciplines. Many known creatives have lived there, including Gil Evans, Diane Arbus and Vin Diesel.

Westbeth is a desired place to live with a long waiting list. Once people get in, it’s rare anyone leaves vertically. We are an aging community, a NORC, meaning a Naturally Occurring Retirement Community. I have seen many of my friends go from canes to walkers, to wheelchairs to housebound. And over the years have lost several.

Our staff is like family. It was two of our men who pulled my neighbor out of the fire. They risked their own lives to save him. That is what family does.

Our pipes and windows are old. What has saved us more than once are our thick walls and the people that work there.

My apartment was one of the few that was crowbarred opened. It’s amazing how much force that involved. Our doors are metal and mine was left deformed afterward and my bottom lock was gone. It took the dedication and hard work of my super to hammer my door enough to make it possible to lock it.

When I entered my home, I saw on the floor a double-A battery and my clock lying next to it. The time had stopped at 3:05 p.m. It had fallen off the wall when they crowbarred my door.

Our hall was filled with water. Apartments below on the same line were dealing with water draining down. Our staff was on it, vacuuming it up. Soon the fire marshals arrived, trying to solve the mystery of the fire. A professional company was engaged to clean up, including removing the smoke smell. For those of us whose doors were destroyed, new doors have been ordered.

As of this writing, my neighbor is in critical but stable condition. I pray for his recovery. I think about his wife, and all the love and support she also needs. I can’t imagine living through this trauma at any age, never mind in your late 80s.