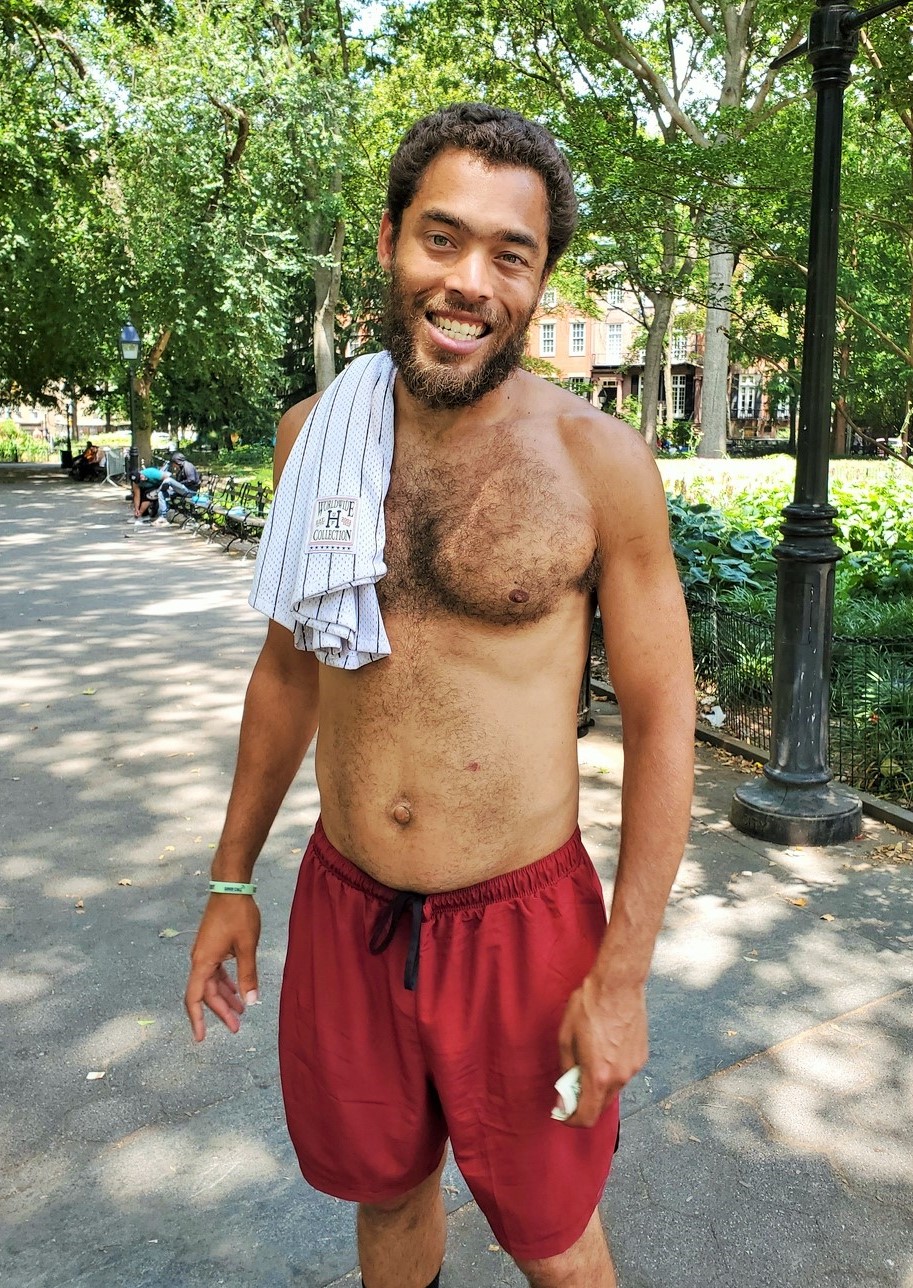 BY LINCOLN ANDERSON | A man who has recently gotten lots of “exposure” in and around Washington Square Park said he’s related to a famous athlete, that he was a college jock himself and that, well…he really loves drugs.

The Village Sun bumped into Stephen “Steve” Flanagan last Sunday on the west side of the Greenwich Village park, in the oval near the Alexander Lyman Holley Monument. He was trying to scrounge up a few more bucks to score a hit of crack — though, at first, he claimed he was asking for “a donation for the food.”

“Help me out. Help me out,” he was asking some acquaintances.

The Village Sun recently reported how Flanagan, 31, sat in the middle of traffic in his underwear at Sixth Avenue and W. Fourth Street. More recently, the New York Post reported that he climbed a cherry picker in the park near the iconic marble arch, stripped off his shorts and showed the crowd the full monty. “Are you not entertained?” he shouted to onlookers, trying to channel Russell Crowe from the movie “Gladiator.”

The Post article stated that “Steve” is known around the park and “suffers with mental health issues.”

Asked on Sunday about the latter incident, he proudly declared, “Yeah, I went viral. I got a million views — viral. Viral on Tik Tok, YouTube and Twitter right now. I’m the most searched-for man in New York City right now.”

On this day, he was shirtless but — for the moment, at least — wore a pair of long red shorts, along with sneakers and black socks, with a baseball jersey flung over his shoulder.

Affable and relaxed, and sporting a handsome smile, Flanagan shared with The Village Sun some of the basics of his story.

He stated he’s a close relative of the former boxing champion Sugar Ray Leonard, considered one of the greatest fighters in the world.

“My uncle is Sugar Ray Leonard,” he said, “my mother’s brother.”

Asked if he was a boxer, too, Flanagan said, no, but that he played college basketball at the University of Bridgeport.

Asked how long he’s been hanging out in Washington Square Park, he said, “Eight straight years.”

As he spoke, an older man with a cane who had ambled up, apparently a non-drug user judging by his acerbic attitude, started interjecting saracastic zingers at the end of each of Flanagan’s statements, calling him an “a–hole,” “douchebag,” “31 going on 7” and the like.

After Flanagan mentioned he was a former college hoops player, the senior spat, “You suck!”

But the young, drug-loving park denizen did not get upset, though did matter-of-factly tell the other guy, “Shut up, you’re on a cane, bro — I’ll go right through you.”

Asked by The Village Sun if he was panhandling for food, Flanagan said, “Yeah — I’m hungry right now.”

However, the prickly old-timer chimed right in, “Do not give him any money! It goes to crack!”

But Flanagan was unapologetic about his drug use.

“Who gives a f—?” he retorted after the other man’s warning. “So what? I like doing crack. I love drugs. I love drugs,” he repeated.

Asked if he planned to spend them on drugs, he said, yes.

“Yeah, I need six more — six more dollars,” he said. “Eight dollars gets me a dime of crack.”

A dime is a small “rock” of crack. Apparently, the cost of crack in Washington Square Park is a bargain since a dime there is under $10. Crack gives an intense but short-lived, euphoric high.

Neighbors and community groups have long complained about the open use of hard drugs, like crack and heroin, on the western side of Washington Square Park, especially in its down-and-out northwestern corner.

This reporter likely would have spoken to Flanagan longer but happened to be in the middle of an interview with someone else at the time.

Meanwhile, the University of Bridgeport did not confirm whether Flanagan had been a student or played basketball there. A woman who answered at the school’s general phone number said Flanagan would first need to sign a letter authorizing the school to confirm if he had once been a student. She forwarded the call to Craig Lennon, the dean of students, who did not respond to a voice message and e-mail asking if Flanagan had gone there.

The Village Sun could not immediately confirm if Flanagan is related to Sugar Ray Leonard.

Flanagan apparently is not homeless, at least not at the moment. He said he’s from the Bronx and that he was getting an apartment in that borough the next day.

Toward the end of the brief interview, another man chipped in a comment. He was a big guy and one of his eyes resembled a piece of caramel taffy.

He was later seen walking along a row of park benches trying to peddle pot.