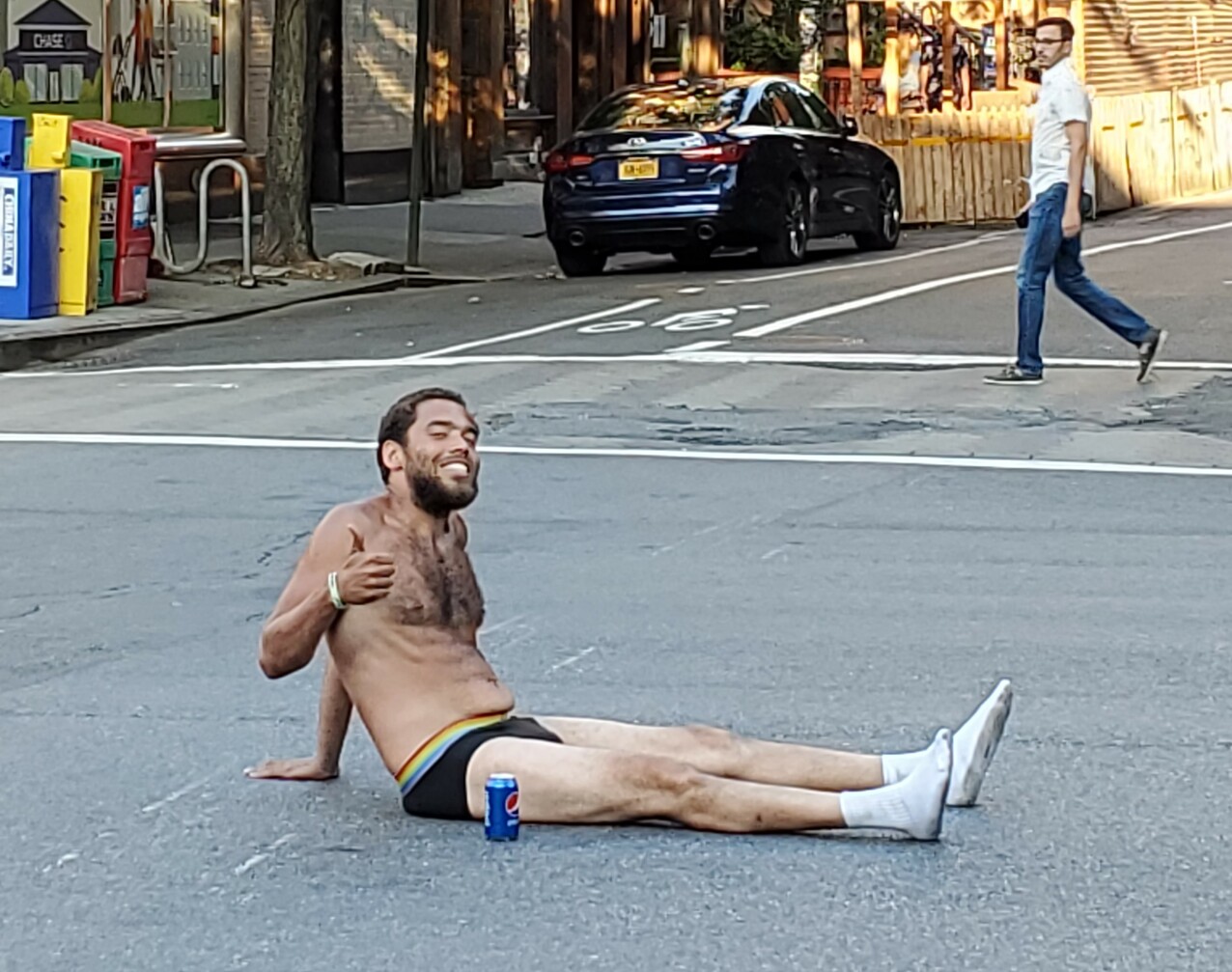 Getting his jollies in his Jockey shorts. (Photo by The Village Sun)

Positively (a pain in the butt on) W. Fourth St.; Man sits in traffic on 6th Ave.

BY THE VILLAGE SUN | Talk about intersectionality.

A guy in just his skivvies and white socks popped a squat right in the middle of the intersection at W. Fourth Street and Sixth Avenue late Thursday afternoon.

Wave after wave of cars, buses, cyclists, e-bike deliverypersons and pedestrians all just streamed by him and around him. Miraculously, no one ran him over.

A “brief” eight-minute video about the street sitter. (Video by The Village Sun)

Sometimes he sat up. At another point, he lay on his back in a semi-spread eagle, arms outstretched to his sides.

If he had a specific protest agenda, it wasn’t clear.

Two medics with an ambulance from New York-Presbyterian Hospital, likely the one in Lower Manhattan, tried to talk to the underwear-clad individual, but he wouldn’t abandon his spot.

Firefighters rolled up in a fire engine and kept an eye on the situation for a few minutes. When a police car arrived, the fire truck drove off. As it did, the guy in the street looked toward the fire truck, put his fingers to his temple like a gun and shrugged.

Earlier, the possibly Hanes-wearing traffic hazard had twice stood up, spun around and heaved things — one time a can of Pepsi, the other time maybe a hot dog — at traffic heading uptown.

Passersby commented on the kooky scene.

“Ohhhhh! He bought a $5 bag of crack,” one man offered with a broad grin.

“The weekly event,” another quipped with a “seen everything” deadpan as he crossed Sixth Avenue while walking two dogs.

A bicycle delivery guy with an African accent who pulled up for a few seconds claimed to have seen the Fruit of the Loom loony toons pull this stunt a few times before.

A pair of police officers walked the briefs bro onto the sidewalk on the east side of Sixth Avenue, but of course he just hopped right back into the street, then stood leaning on an SUV.

That was it. Police arrested the knickers nincompoop and he was loaded into the ambulance.

Asked if the man was being treated as an E.D.P. — cop speak for “emotionally disturbed person” — an officer just nodded yes as he got back into his squad car.