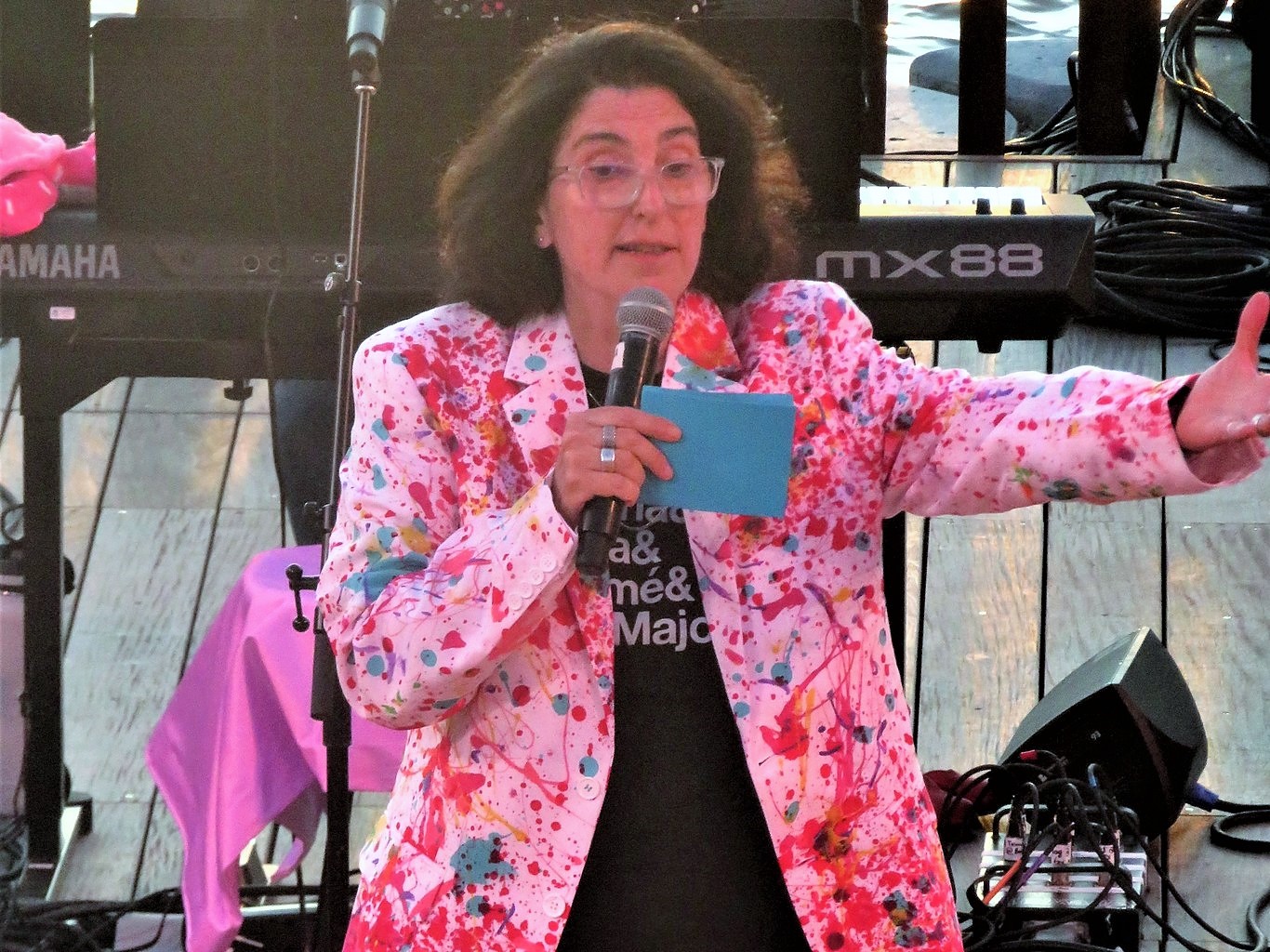 Tina Landau said it was a "gift" to be able to perform for a live audience once again. (Photo by Everynight Charley Crespo)

The joy of live: ‘Tina + Friends’ at the Amph

The pier, just off of W. 14th St., opened on May 21, and has drawn thousands of visitors to its flora, panoramic views and musical programs. The centerpiece of Little Island is the Amph, a 687-seat amphitheater overlooking a glistening river and stunning sunsets.

The program team at Little Island granted a three-year residency at the Amph to playwright and director Tina Landau. Landau has built a reputation for her large-scale, musical and ensemble-driven productions, which have appeared on Broadway, Off-Broadway and regionally. At the Amph, Landau will curate “After Hours with Tina Landau,” a cabaret series featuring “female composers, gender-nonconforming artists and more,” according to the Little Island Web site. Landau’s first program debuted June 26, entitled, “Tina + Friends: BYOB (Bring Your Own Beautiful).”

“The idea for this evening came from the simple impulse of wanting to gather friends together and celebrate the fact that, after fifteen months of separation and no live performance, we could be together again to make art and play music for you — a live audience,” Landau posted on the Little Island Web site about the initial program. “For most of the performers tonight, this will be the first time they’ve been able to do so in almost a year and half. What a gift, what a joy, that makes this occasion — I thought it deserved a party. And so I invited my friends — literally, people I know well and love. I thought to myself, ‘How beautiful…’ and then I mulled on the beauty of this magical island, and the sky, and the river — and then I thought about what else I consider beautiful and my answer was, above all else, Diversity: the vast and wondrous array of nature, and human proclivity, and skin colors, and bodies types, genders, ages, abilities, cultures, beliefs, religions, and so much more. And then I realized we’d be having our party on Pride Weekend!!, when we celebrate the LGBTQIA+ community, of which I am a proud member.”

L.G.B.T.Q.+ pride was a recurring theme throughout the evening. Two Pride flags hung on the back fence, behind the musicians (keyboardist Kimberly Grigsby, trumpet player Tony Kadleck, guitarist Ann Klein, violinist Hiroko Taguchi, bassist George Farmer and drummer Dena Tauriello). As Landau asked each performer what was the beauty they found in the song being performed, several performers tied their song selection to the Pride theme. Kelvin Moon Loh, for instance, identified the gay rights struggle as the inspiration for his “beautiful,” the song “The Impossible Dream” from “Man of la Mancha.”

The evening’s repertoire included reinterpretations of theater music as well as covers of songs by John Lennon, Lesley Gore and Reggie Watts. Jon Michael Hill performed an original song. Bill Irwin performed a comedic tableau as a vaudevillian, and Tony Yazbeck and Jared Grimes performed a jaw-dropping song-and-tap routine. Many of the performers had performed in “The SpongeBob Musical,” and so the program ended with an ensemble performance of “Best Day Ever.”

Little Island promised and delivered big entertainment with “Tina + Friends.” An announcement about Landau’s next production on the pier will be published in the near future.

“You Don’t Own Me” – Stacey Sargeant, Rebecca Naomi Jones and Libby Winters

“All the Things You Are” – Jason Danieley

“Me and My Shadow” – Tony Yazbeck and Jared Grimes