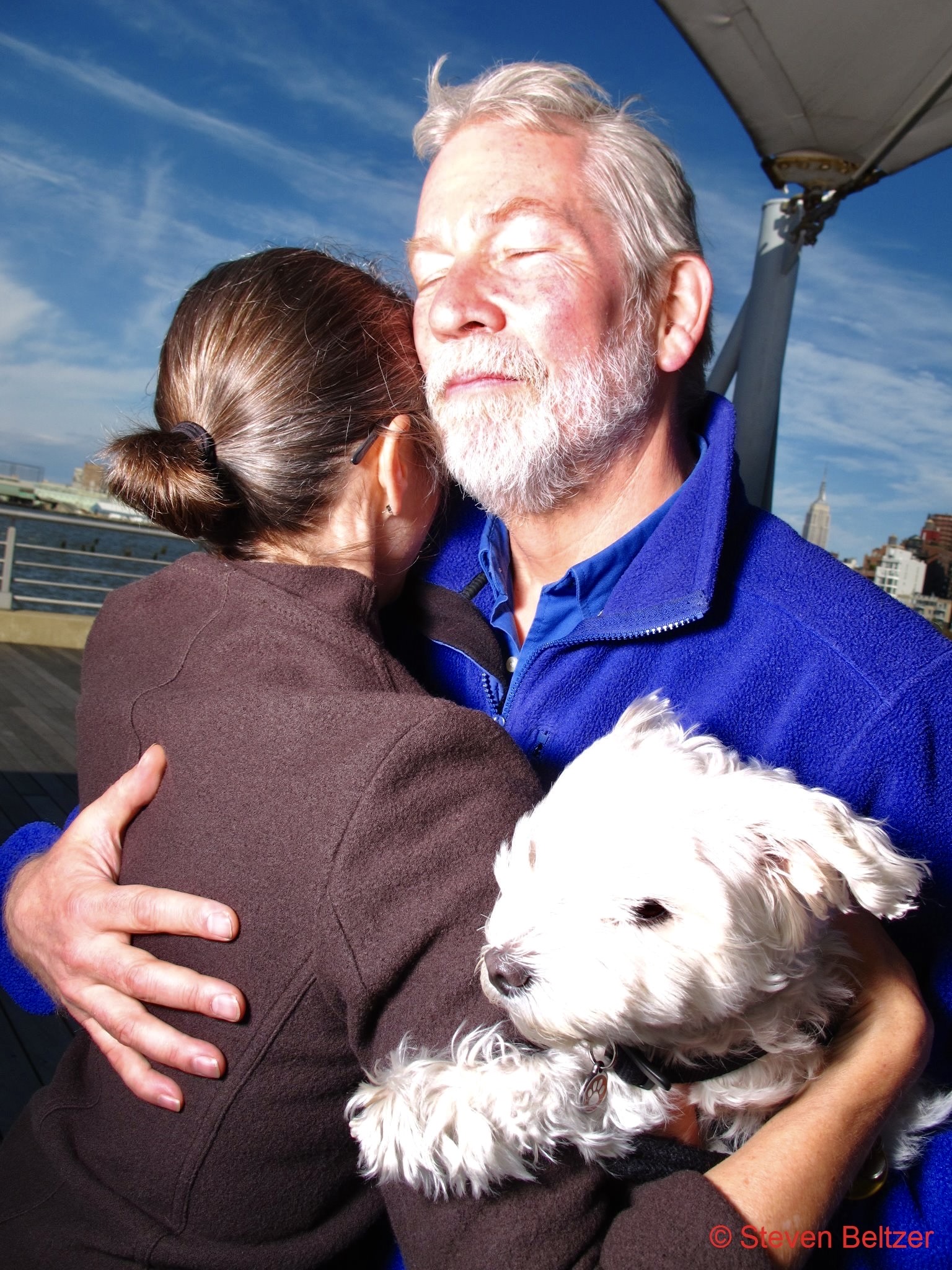 It takes...three...to tango, in this case at least, at Volvo Tango at the Pier. (Photo by Steven Beltzer)

Tango, passion and betrayal in the time of COVID at the Christopher St. Pier

BY AIDAN SEIDEN | Every Wednesday and Sunday for more than a decade Steven Beltzer has driven his antique Volvo Amazon across W. 10th St., parked it along Pier 45, and played Argentine tango music from his stereo for the eager dancers of the night, giving rise to the term “Volvo Tango.”

Beltzer, 58, works part time as a photographer, among other things. However, his passion is organizing and instructing the free “Volvo Tango at the Pier” events, which he describes as his “labor of love.”

He first entered the Argentine tango scene as a dancer many years ago, and fairly quickly began to host outdoor events where he was a student at that time, in Copenhagen, Denmark.

Eventually, his native city of New York called to him, and he returned home, bringing with him his extensive knowledge of tango and a love of teaching it.

A traditional Argentine tango event, known as a milonga, consists of an intimate dance in which two individuals dance cheek to cheek, or as Beltzer likes to joke, “nostril to nostril.” Then after 10 minutes there is a short break followed by a change of partners.

So, in the span of about two or three hours, each dancer has interacted with a significant number of people, transforming this into — a potential breeding ground for an airborne virus.

That’s why, after the emergence of the COVID-19 virus early last March, Beltzer had to formally halt these gatherings, to his own dismay and that of his dancers — or, as he prefers to call them, his Volvo-Tangueras and Volvo-Tangueros, which are male and female tango enthusiasts.

Annie Shaver-Crandell is one of the longtime tango faithful at the Christopher St. Pier, as Pier 45 is also known.

“For years,” she said, “many of us had counted on being able to go over to the pier and dance our brains out every Wednesday and Sunday, knowing that the music would be reliable, that we would be welcomed.”

Shaver-Crandell, 79, has co-hosted social tango events at the Salmagundi Club, at 12th St. and Fifth Ave., since 2009 and understands the heartbreaking reality of having to stop doing what she enjoys for the safety of her community. So it was especially distressing for her when she heard that a fellow tango community member had taken over Beltzer’s place on Pier 45 and scheduled her own event during the exact time and days that Beltzer’s would have been, had he not canceled due to the pandemic.

Nadia Nastaskin, Beltzer’s “opponent,” as he refers to her, has attended his events quite frequently, as has the majority of the tango community. However, she chose to continue conducting these gatherings during the height of the pandemic.

So, at this point, it seems that the tango community is divided. There are those who continue to attend Nastaskin’s milongas, and those who abstain in order to remain faithful to Beltzer and avoid contracting the virus, which seems to be the overwhelming majority.

More than 150 people have written to the Hudson River Park Trust, specifically to Noreen Doyle, its president and C.E.O., pleading with the park authority to take action against  Nastaskin and return the space to its “rightful holder,” Beltzer.

One Beltzer dance devotee, Anita Lanzi, wrote, “The other party by requesting the same days and time slots known to tango dancers, across the greater NYC area and around the world, as ‘Volvotango on the pier,’ is clearly attempting to capitalize on the cachet that Steve has brought to these particular events through a decade of hard work and passion.”

In response, the Trust has sent e-mails to the tango community members, notifying them that “everyone has the right to dance in Hudson River Park,” adding that it is requesting Beltzer pay for a new permit, not because of Nastaskin, but because of the size of the crowd that attends this event.

As one of the regular tango dancers noted, many participants travel in from all five boroughs, as well as New Jersey and even Connecticut, for the Christopher St. milongas.

According to a Trust spokesperson, the city-state park authority gave Beltzer first choice on the permit hours he preferred, but he is still unsatisfied with “anything short of a de facto ban on other tango groups at Pier 45.” The Trust says it has invited him to resume his classes and “focus on dancing rather than continuing arguing.”

Beltzer says he is “honored” to be able to arrange his events at Pier 45, and that whenever he resumes organizing his tango gatherings, he would not mind sharing a venue with Nastaskin, as long as they are allotted different hours for their respective groups.

“Tango is in many ways an addiction,” Beltzer said. “It’s not the worst addiction you could have, but in times of COVID it can be just as lethal as heroin.”

Nataskin did not respond to a request for comment.