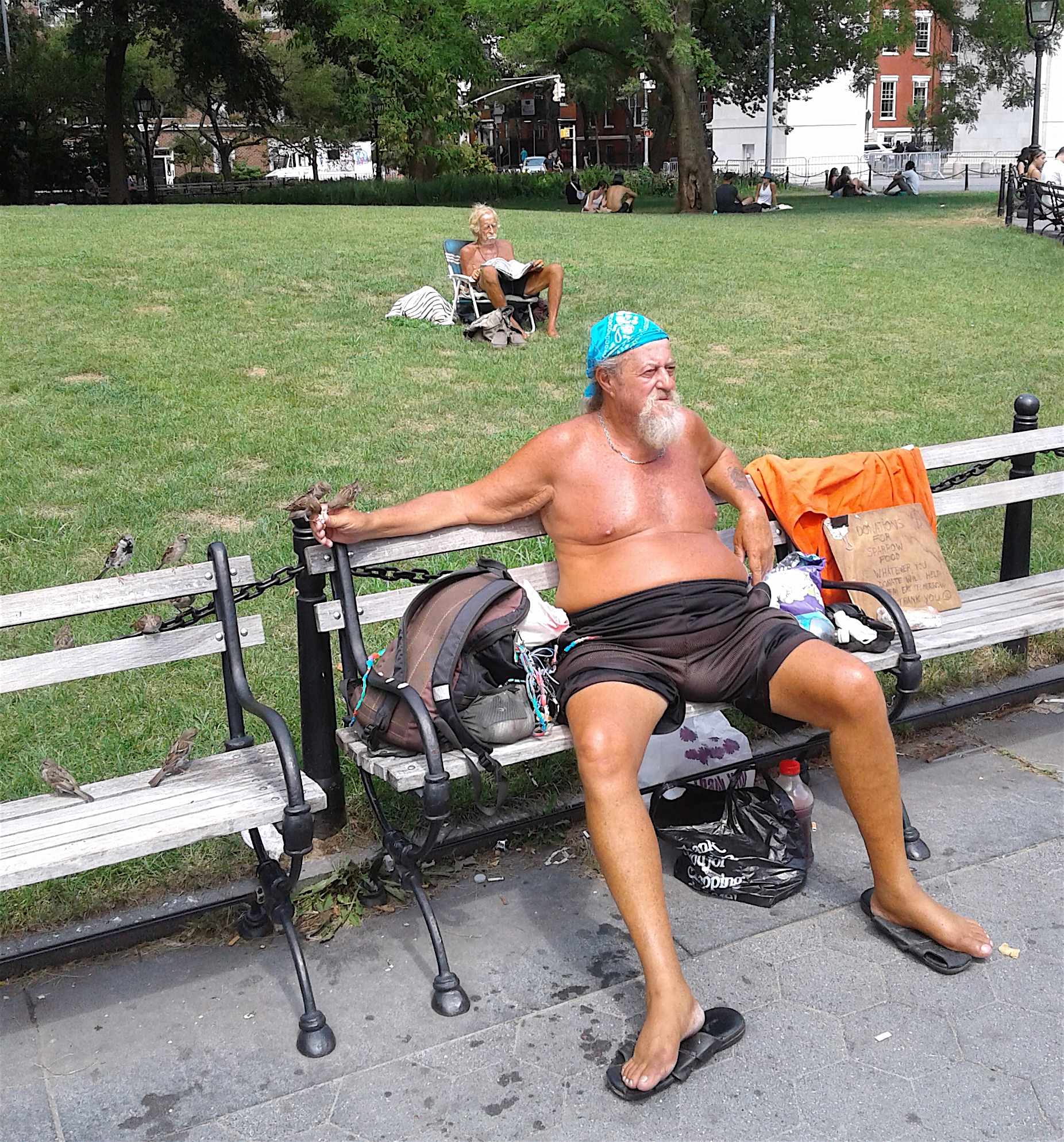 Ronnie and Monty, at rear, live to tan in Washington Square Park. (Photo by The Village Sun)

Unlike Donald Trump’s tan, these guys’ bronzed bodies are the real deal.

On sunny days, you can find Ronnie and Monty in Washington Square letting the sunshine in.

Monty sits in a lawn chair and uses a reflector. You’ll find Ronnie on a bench, a flock of sparrows eagerly eating out of his hand.

Asked how long he’s been visiting the Village park, Ronnie, who is from the Bronx, told a reporter, “Longer than you’re alive. I’ve been coming here, on my own, since I was 15. That was 56 years ago.”

Ronnie is a sparrow specialist. He doesn’t use birdseed, but small pieces of white bread that he holds between his fingers, so that the little flyers have to perch on his hand to nibble it.

“I don’t throw anything on the floor,” he explained of his technique. “The floor is dirty. My hand is clean.”

Also, if he flung the bread on the ground, the pigeons would go after it.

Also on the subject of birds, he has witnessed the red-tailed hawks that live around Washington Square fiercely hunting in the park.

“I’ve seen hawks grab a small field mouse,” he said. “Pigeons are the worst; they de-feather them while they’re still alive.

“They can’t get these guys, they go in the bush,” he said of the sparrows.

If you take a photo of Ronnie, he’ll ask you for a donation for “sparrow food.”

Meanwhile, sitting a bit behind him on the lawn this past Friday, Monty, as usual, was more low key.

“In the old days, he was always at Fanelli’s, immaculately dressed and in a state of deep meditation,” the Soho illustrator recalled. “Monty was more than just a mascot or even an icon, perched at the end of the bar. He was a kind of deity for those of us who were gathering in search of art gallery openings or parties.

“Age and circumstance may have curtailed his activities in recent years, but the last time I saw him, he assured me that he always held court at Fanelli’s on Thursday evenings.

“What a hopeful sign it is to see Monty taking the sun!”

Monty, for one, can even be seen tanning in the park in colder weather, with the help of his trusty reflector.