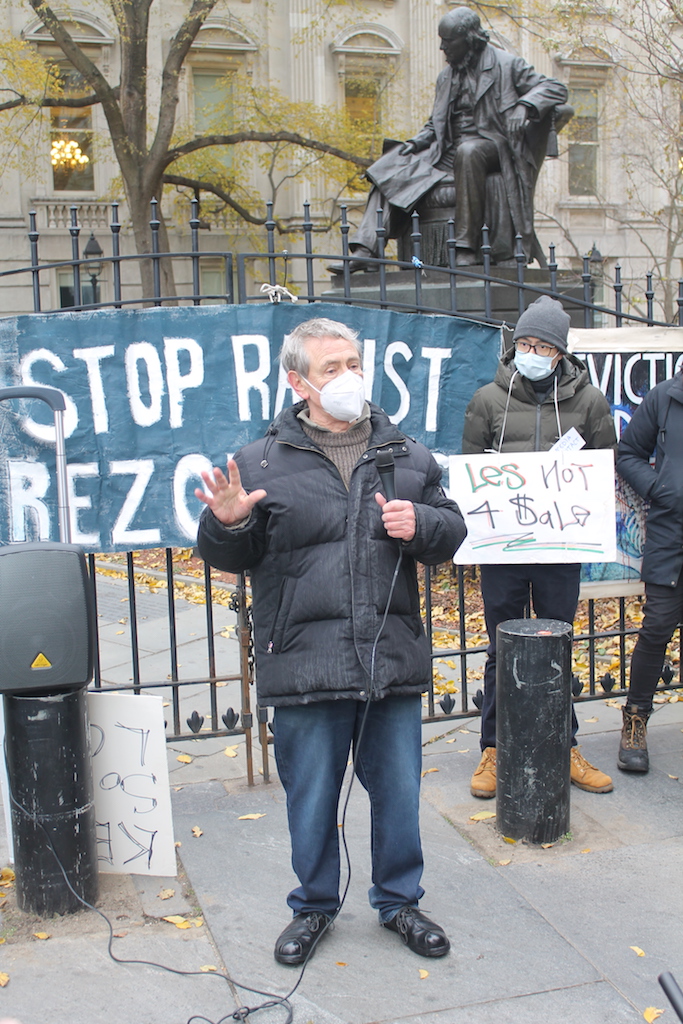 Sean Sweeney, executive director of the Soho Alliance, spoke at a rally in December against the de Blasio administration's rezonings. The event included groups from around the city fighting unwanted rezonings in their communities. (Photo by The Village Sun)

BY LINCOLN ANDERSON | Updated April 3, 6:30 p.m.: On Friday, the de Blasio administration announced that it has given 30-day notice to Community Board 2 that it is about to start the public review of the contentious Soho/Noho rezoning.

In other words, the rezoning plan would be “certified” in one month, allowing the process to move forward.

A tweet by the City Planning Department announced that the public review, known as ULURP, for the scheme will commence in May.

The SoHo/NoHo Neighborhood Plan is expected to begin public review in May. Today, the 30-day notice for this proposal was sent to the local Community Boards. Learn more at our Zoning Application Portal: https://t.co/rzxCdB6PiB

The tweet links to City Planning’s “zoning application portal,” which states, “[The] SoHo/NoHo Neighborhood Plan seeks to strengthen SoHo and NoHo as mixed-use neighborhoods and promote equity. The proposal will expand housing opportunities for New Yorkers, reduce burdens for residents and businesses, and support continued economic and cultural success in a holistic way.”

But many local residents vehemently oppose the plan, calling it a “Trojan horse” that will, above all, open the floodgates to market-rate development. Developers have been salivating to get their hands on Soho and Noho, the coveted Downtown Manhattan enclaves that were pioneered by artists, though which are protected by landmarking.

Following the news of City Planning’s announcement, Andrew Berman, executive director of Village Preservation, charged that the lame-duck mayor should not be trying to hurriedly ram through such major initiatives in his final months in office.

“As the sun begins to set on Bill de Blasio’s failed mayoralty, he’s trying to cram another ill-advised plan down the throats of New Yorkers,” Berman said. “Whether it’s the proposed mega-jail in Chinatown or this [Soho/Noho] upzoning plan that will actually make the neighborhood wealthier and less diverse, de Blasio is again showing why decisions that will impact the future of the entire city should be left to the next mayor.

“Instead of this plan, which includes massive handouts for the mayor’s real estate buddies,” Berman said, “we encourage the city to consider the community’s alternative plan that will protect affordable housing in the neighborhood.”

The community alternative plan would restrict the size of new buildings and also mandate deeper affordability than the city’s current rezoning plan.

Sean Sweeney, executive director of the Soho Alliance, blasted the Soho/Noho rezoning as blatant “payback” to developers and lobbyists.

“I guess in the dimming twilight of his failed administration, de Blasio wants to pay back his developer buddies and lobbyist pals for all those nice campaign contributions,” he said.

“Remember, this is the guy who 15 months ago said on ‘The Brian Lehrer Show’ that he was definitely not going to change the zoning here because there was too much opposition and not enough time.

“Then, inexplicably, eight months into a pandemic — just as the darkness of night resurrects a grotesque zombie — de Blasio decided to resurrect his ghoulish scheme instead of wisely, diplomatically and graciously letting a new administration address Soho/Noho’s rezoning.

“This will be the first upzoning of any of the city’s 130 historic districts since the Landmarks Preservation Commission was created in 1965,” Sweeney noted. “Not only Soho/Noho activists oppose this, so too does the National Trust for Historic Preservation and other preservationist groups.

“Furthermore,” the activist added, “instead of de Blasio’s false narrative of providing affordable housing to some, real data show that the greater number of luxury units created under his scheme would only put added displacement pressure on nearby existing rent-stabilized units.

“You have to hand it to de Blasio,” Sweeney said, “he’s never seen a developer he doesn’t like.”