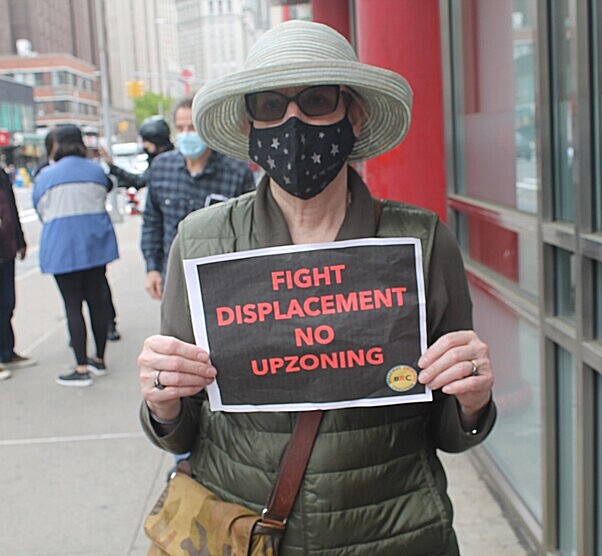 Longtime Soho resident Lora Tenenbaum held a protest sign at a rally in May against the Soho/Noho upzoning. (Photo by The Village Sun)

BY THE VILLAGE SUN | The Soho Alliance and Broadway Residents Coalition filed a motion in State Supreme Court last Friday to reargue their case against the city’s Soho/Noho/Chinatown rezoning proposal.

The plaintiffs contend the judge overlooked, misinterpreted and failed to rule upon their charges that the de Blasio administration violated various requirements of the City Charter.

According to the plaintiffs, throughout the three-month court hearing, the judge seemed sympathetic to their contention that the city’s terse three-sentence description of the 16,000-page rezoning document did not meet City Charter requirements that timely notice and sufficient description of the proposal be provided to the local community board and the public.

However, the plaintiffs contend, during the final oral arguments on July 7, the city’s lawyer threw in “new and unsubstantiated claims,” leading the judge to misinterpret the city’s evidence and rule unfavorably against the community lawsuit.

After that court decision, the plaintiffs’ attorney, Jason Zakai of Hiller PC, researched the city’s assertions, “documented their errors” and has now petitioned to reargue the case.

Additionally, the plaintiffs are arguing that the judge overlooked another Charter mandate requiring City Planning “to establish minimum rules and standards regarding the form and content of the notice.”

The Soho plaintiffs assert that, as of today, no such rules have been established by the city — although the City Charter mandates that they should have been created by Aug. 31, 2020.

“Without these rules, the city arbitrarily and conveniently does what it wants and, when challenged, claims it is doing the right thing,” Sean Sweeney, the Soho Alliance’s director, said.

“Not only are we filing these papers in our fight against de Blasio’s upzoning,” he added, “we are doing it for the benefit of community and good-government groups throughout the city who want to challenge an arbitrary and capricious city administration.”

Finally, the plaintiffs’ attorney also filed a “notice to appeal” the judge’s July ruling. They have six months to file the appeal.

In the meantime, the Soho plaintiffs will be following the progress of their current motion to reargue. It will be up to the court to decide whether the case will be reargued.