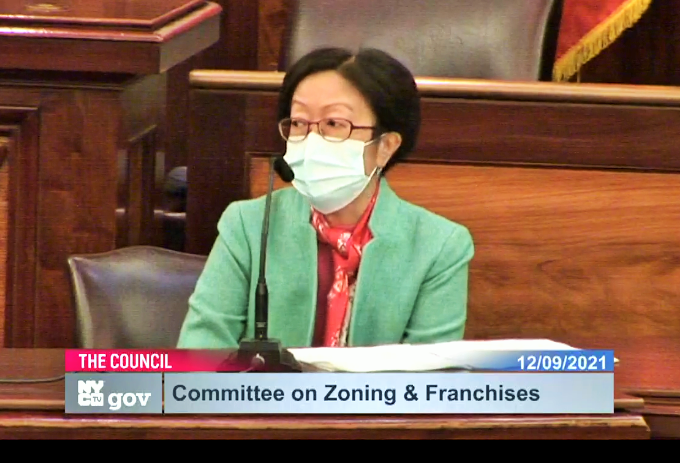 Soho and Noho residents are urging Mayor Adams to veto a contentious last-minute bill snuck in by Councilmember Margaret Chin, above, just weeks before she was term-limited out of office. In a highly unusual move, there was no public discussion of the bill before it was approved by the full City Council.

BY THE VILLAGE SUN | You’ve got to pick your battles.

Soho and Noho residents believe that Mayor Eric Adams will not veto the contentious Soho/Noho upzoning that the City Council pushed through in the final days of Bill de Blasio’s last term. As The Village Sun first reported, a new group, the Coalition for Fairness in Soho and Noho, is currently fundraising for a lawsuit against the rezoning.

However, locals are holding out hope that “a window of opportunity” exists for the new mayor to veto former Councilmember Margaret Chin’s “punitive legislation,” Intro 2443A, which would hit nonartist residents with repeated fines at never-before-seen levels.

Under the measure, nonartist residents living in JLWQA (Joint Live/Work Quarters for Artists) units in Soho and Noho would be fined a minimum civil penalty of $15,000, plus $25,000 for each individual citation, along with $1,000 per month until the violation is “cured.”

Curing the violation would mean paying the “flip tax” conversion fee — which is contained in the Soho/Noho rezoning — of $100 per square foot to convert lofts from JLWQA to regular residential. The other option would be for residents to abandon their homes.

According to the Soho Alliance, Adams has until Fri., Jan. 14, to sign the bill into law.

Opponents charge that the fines are merely a displacement strategy to clear out units in the highly coveted neighborhoods, so that big-moneyed real estate interests can swoop in and make a killing.

In response, opponents are organizing a letter-writing campaign to Adams and his top advisers, urging that the mayor not sign the bill. If Adams neither signs the legislation nor vetos it, it becomes law automatically.

“This legislation was introduced by former Councilmember Margaret Chin just weeks before leaving office and is opposed by the current councilmember representing the neighborhood, Christopher Marte,” a sample form letter provided by the Soho Alliance states. “Mayor de Blasio did not sign the legislation, giving Mayor Adams an opportunity to veto it.

“Intro 2443A unfairly penalizes families and individuals who live in lofts classified as Joint Live Work Quarters for Artists (JLWQA) under an obsolete zoning provision adopted more than fifty years ago and never enforced.

“The bill would impose draconian penalties of up to $25,000 per violation (more than any other Department of Buildings fine, including for highly dangerous activities like operating a crane without a license) on non-certified artists for doing nothing more than living in their safe and well-maintained homes.

“The accumulation of these penalties and violations, which could easily amount to hundreds of thousands of dollars, could force more than 1,600 families to vacate their homes and decimate the values of their nest egg.

“The law is extremely cruel in that, upon a certified artist’s death, their widow/widower and children [if not artists themselves] will immediately be exposed to massive fines.

“Moreover, there are no beneficiaries or public interest to this ill-conceived legislation, which was rushed through the Council at the end of the term with no discussion and no community input or debate as to the serious consequences for thousands of New Yorkers like me.

Chin’s bill and the Soho/Noho rezoning are separate, yet vaguely related. She introduced her legislation in November the day before the Council’s Zoning and Franchises Subcommittee held its hearing on the rezoning. However, Sean Sweeney, the director of the Soho Alliance, called the former councilmember’s measure a “sneak attack” since there was strangely zero discussion of it before Chin introduced it.

The Soho activist added that, beyond the JLWQA noncompliance fines and the flip tax, there would be other costs associated with bringing manufacturing-zoned buildings up to code.

“Other costs, especially construction costs, to bring manufacturing-zoned buildings up to code as residentially zoned buildings could be very high, well into the hundreds of thousands,” he said. “Think: ADA requirements, light and air requirements, fire code requirements, plus architect, engineer, expediter fees, etc. It will cost a fortune.

“Chin’s legislation did not have a single co-sponsor, very unusual,” he noted. “As an affront to democracy, there was not a single word of debate on the bill or public testimony allowed.”

Village Preservation is also onboard with the effort, urging members to write to Adams and his cabinet, asking for the mayor to oppose the stealth bill.

“For many years, the city has offered almost no new artist certifications, and ignored rules requiring only such persons to live in certain spaces in these neighborhoods,” Village Preservation said in a message to its e-mail list. “Now, decades later, this bill will severely penalize those who have lived here with full knowledge of the city and no enforcement of these rules.

“The measures — sponsored by outgoing Councilmember Margaret Chin — are punitive and serve no public purpose other than to punish residents of these neighborhoods who opposed her rezoning plan. The measure is opposed by new City Councilmember Christopher Marte and several other local elected officials. Mayor Adams now has the opportunity to veto this legislation.”

In addition to challenging the rezoning, the Coalition for Fairness in Soho and Noho, the new group raising funds for a lawsuit, also plans to contest Chin’s JLWQA fines regulation.