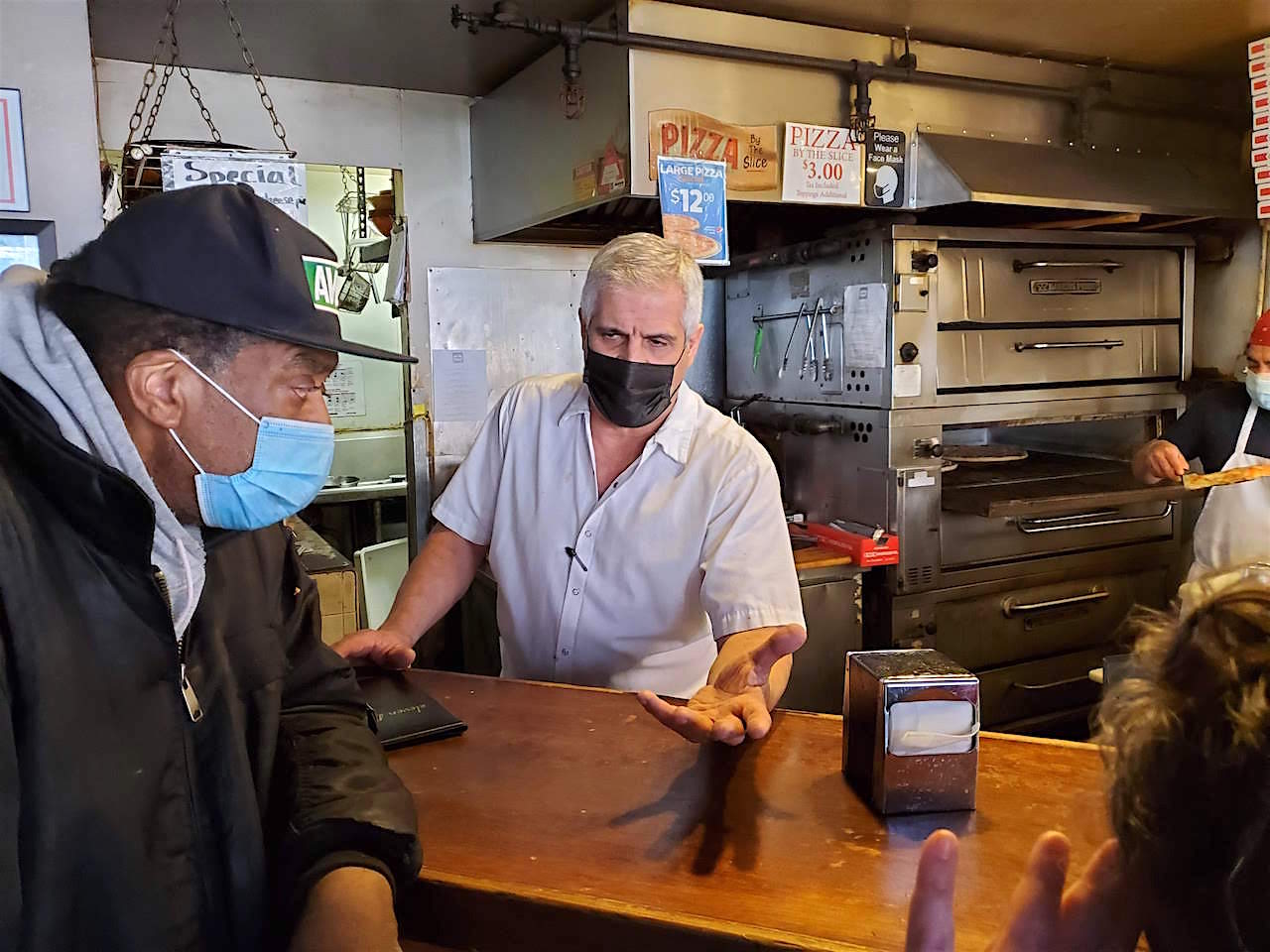 Vincent "Vinny" Sgarlato of 11 B. pizza and wine bar talked about the state of small business with community activist Dave "The Bulldozer" Brausell." (Photo by The Village Sun)

BY THE VILLAGE SUN | Local community organizations and small business groups rallied on Avenue C on Thursday to plead for rent relief for merchants hammered by the pandemic.

They gathered outside Michelle Dry Cleaners & Laundry, between 10th and 11th Sts., on a strip of small businesses. Afterward, they went around the neighborhood symbolically putting “Permanently Closed” signs on mom-and-pop shops at risk of shuttering due to the rent burden during the health crisis. Rent — already prohibitively high before the pandemic — is the Manhattan merchants’ biggest concern for their survival.

“We’ve been working with businesses since it started, and the one common thread is the rent,” said Laura Sewell, executive director of E.V.C.C. “The effect will be to eradicate our culture. Small displacement is cultural displacement. Who’s going to have the money to come back in? Once we lose these unique businesses, it will be as homogenous as anywhere else in New York.

“Landlords aren’t the enemy,” she said. “They’ve gotta pay the mortgage. But they need help and the businesses need help. Federal money’s coming and it needs to go here to small businesses and small landlords.”

Specifically, the demonstrators called for Albany lawmakers to pass state Senate bill 3349/Assembly bill 3190, under which, the commercial tenant, landlord and state government would all share the burden of the rent shortfall. Commercial tenants would have to pay the lesser of 20 percent of their actual income or one-third of their rent, property owners would have to forgive 20 percent of the rent, and the state government — using federal or state funds — would pay the remainder.

The bill’s sponsors are Brad Hoylman in the state Senate and Harvey Epstein in the Assembly.

To be eligible for the rent-relief program, a small business or nonprofit with 25 or fewer full-time employees would have to show that it has suffered an income loss due to state-mandated closures or restrictions.

Under the law, there would be a “covered” period, starting March 7, 2020, and ending when executive orders curtailing businesses’ activities are lifted. Eligible tenants would receive rent relief during the covered period, plus for an additional 180 days past the end of the lifting of restrictions.

Impacted landlords would be eligible to apply to the Empire State Development agency for reimbursement of lost income beyond the waived 20 percent of the contractural rent.

The idea is that $500 million of expected federal aid should be used to provide this relief.

The East Village rally was part of a statewide week of action for commercial rent relief.

After the rally and postering, the East Village group stopped by 11 B. pizza restaurant. Owner Vincent “Vinny” Sgarlato, said it’s been a crazy year. He couldn’t have Christmas or New Year’s parties due to the lockdown. At least, though, he could keep his takeout area — 11 B. Express — open.

“You’re dealt certain cards and you have to play them,” he reflected.

He’s had the pizza place and wine bar since 2006. He lives nearby in Peter Cooper Village, where his where wife was born.

Sgarlato said his landlord, Bob Perl, has been giving him a break on the rent during the pandemic.

Things are looking up a bit. On Friday, indoor dining would be bumped up to 35 percent.

Although many commercial tenants are currently getting a break from their landlords, there’s a misperception that there is a moratorium on commercial evictions.

Paula Segal, an attorney with TakeRoot Justice, said some landlords are cracking down on their commercial tenants, while other tenants could eventually come in for a rude awakening.

“Landlords have generally been able to file eviction cases since June, either in Civil or Supreme Court,” she explained. “Courts are moving slow, but tenants have few defenses if they are behind on rent. That is generally a breach of the lease that entitles the landlord to possession of the space —which the landlord can claim via a ‘holdover’ proceeding in Civil Court or an action for possession in Supreme Court. The governor’s executive order has limited landlords from filing only cases for nonpayment of rent, but not cases claiming that they are entitled to possession.

“Landlords are trying to collect money tenants owe them per the terms of their lease with whatever means they can. Some are just sending threatening letters, making phone calls, etc. Some are filing lawsuits. Some are accepting partial payment and leaving the unpaid rent as debt that the business owes. Some are actually negotiating written binding agreements to forgive some of the rent under the lease; that is much more likely to happen if a tenant has a lawyer to support them in negotiations.

“If rent is not canceled,” Segal warned, “all tenants that did not enter into a written lease amendment abating some of their rent will be massively in debt and risk eviction.”