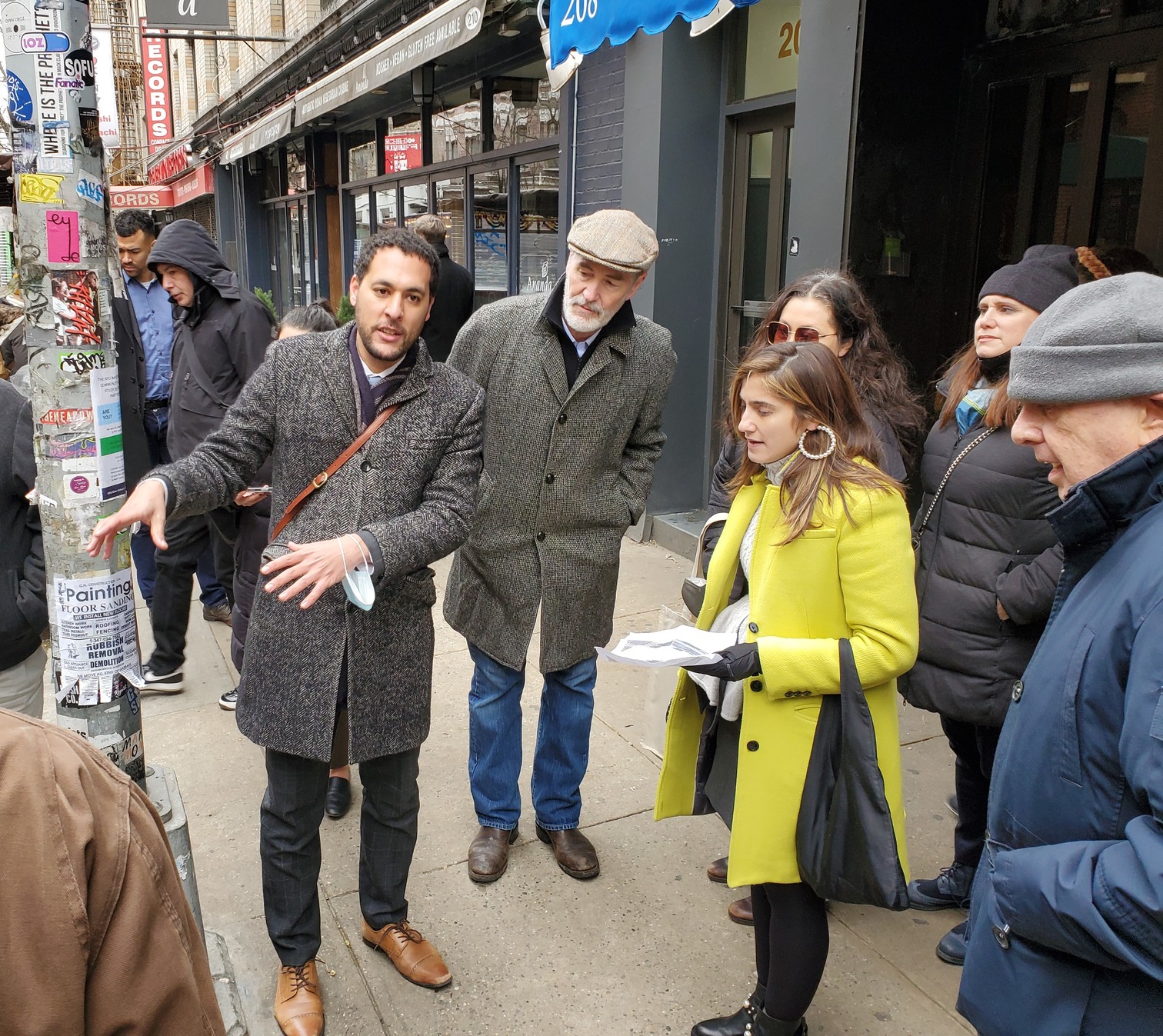 Councilmember Christopher Marte points out to Marjorie Velazquez some unsavory-looking "sludge" that has collected between roadway dining sheds on Thompson Street. (Photo by The Village Sun)

‘Shedding’ any illusions on outdoor dining, Marte and Bottcher give Velazquez a tour of Village streets

BY LINCOLN ANDERSON | Welcome to their world.

Councilmembers Christopher Marte and Erik Bottcher led their colleague Marjorie Velazquez on a tour of “Shed City” a.k.a. Greenwich Village last Thursday morning a few hours before the City Council held a key vote on the future of sidewalk cafes.

Velazquez, who chairs the Council’s Committee on Consumer and Worker Protection, is the lead on drafting the new law that will oversee a permanent program for Open Restaurants — the currently 12,000 pandemic-emergency roadway sheds festooning the city’s streets.

The councilmembers were joined on the half-hour walk by leading Community Board 2 members and representatives of local activist groups — like CUEUP and LES DWELLERS — who are concerned about the city’s new, freewheeling outdoor dining program and its contentious seating structures.

At least four of the activists on the tour, Kathryn Arntzen, Leslie Clark, Diem Boyd and Deborah Gonzalez, are plaintiffs in a community lawsuit filed in October seeking to block Open Restaurants from becoming permanent.

Bottcher’s District 3 (Greenwich Village, Chelsea, Hell’s Kitchen) alone has around 1,300 of the sheds — the highest number of any Council district in the city. Marte’s District 1 (Lower Manhattan, Soho, Chinatown, Lower East Side) has the second-highest number, with 1,050 sheds.

The group gathered at Bleecker and Thompson Streets. Before they kicked off the walk, Velazquez noted that she had attended New York University Stern School of Business.

“So I know these streets,” she said.

However, as she would soon find out, there are some new features on the Village streets nowadays, such as “shed sludge” — the exact ingredients of which no one really wants to know — rodents running wild, mounds of garbage bags rising nearly 5 feet tall in spots and enclosed dining sheds that look more like permanent trailer-park homes.

Marte told her the blocks they would be seeing were “representative” of the issues the Village is facing with the sheds. His district and Bottcher’s abut right at this spot.

“My activity here is to hear your concerns and see through your lens,” Velazquez told the group.

Almost immediately, Marte pointed out some puddles of black, oozing standing water at the curb in between some dining sheds on Thompson Street, noting that it had not rained the previous day.

“And in the summer it’ll become a breeding ground for mosquitoes,” he noted.

Leif Arntzen, the husband of Kathy Arntzen, the president of the Central Village Block Association, stopped in front of a fully enclosed, windowless, wooden structure with padlocked doors outside Cuba Restaurant and Rum Bar on Thompson Street. It looked like a military bunker. He told Velazquez this was much more than a mere shed and went far beyond what was allowed under Open Restaurants.

Next, the tour doubled back and headed west along Bleecker Street, passing in front of Carroll Place, a wine bar that replaced Kenny’s Castaways music club 10 years ago. Between an enclosed area on the sidewalk in front of the restaurant and its roadway dining shed that actually came up onto the sidewalk for a foot or two, there was less than the mandated 8-foot-wide passageway for pedestrians.

Moving along, there were also issues at the Tacombi taqueria at the corner of Bleecker and Cornelia Streets. Technically, Cornelia Street is an Open Street — though it’s not allowed to be completely closed to traffic. But that’s what the restaurant reportedly had tried to do between Fridays and Sundays.

“They tried to close down the street with this barrier,” Marte said, referring to a large, orange, plastic traffic barricade.

At this point, the survey turned into “a walk on the wild side.” C.B. 2 Chairperson Jeannine Kiely showed Velazquez a recent video posted by C.V.B.A. of rats scampering around inside the empty Tacombi outdoor shed, which resembles a long bubble.

Tacombe on Cornelia: After the “outdoor” DIN-ner, the rats & Lysol fumes take over. Just restaurants doing whatever they want, a big FU to everyday people, got the CC pols behind them POR blockading us to help make our public land their private property. pic.twitter.com/ThHgpkvgYJ

Velazquez said she definitely understands the importance of accessible sidewalks from her own experience 10 years ago when she suffered the double whammy of a workplace injury followed by a car accident.

“I had a knee brace, crutches, you name it,” she told The Village Sun.

“We have to keep our businesses open — but we hold them accountable,” she assured the group at the end of the walk.

Boyd of the LES Dwellers was heartened that the key councilmember came out and saw the conditions for herself.

“I’m optimistic that we were heard today,” Boyd said. “I think it’s always better when peple can see the problem rather than hear it on Twitter. I’m impressed with Miss Velazquez wanting to keep the channel of communication open.”

However, Boyd noted that what Velazquez saw on the tour actually was not as bad as it gets.

“We saw the West Side,” she said. “Amplify it 10 times for the Lower East Side and East Village. That shed over there is 10 times better than what we have.”

While the word “equity” is frequently used by Open Restaurants supporters touting the program, Boyd said it’s actually misleading since not everyone has the money to pay New York prices for the food and drink served in the sheds.

“There’s better use for the streets’ equity,” she said. “You have to be able to afford it.”