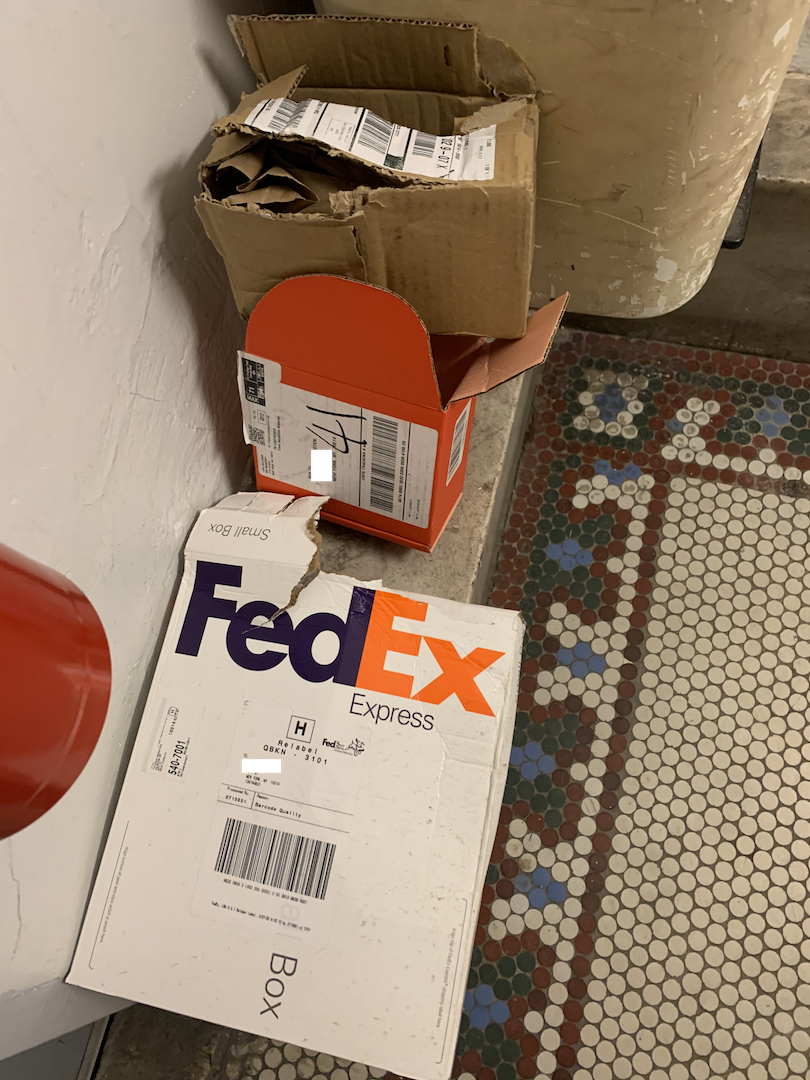 These packages in the woman's lobby were recently broken open and rifled through by thieves, she said.

She suspects pack of package thieves is targeting Village

BY LINCOLN ANDERSON | Updated Wed., April 22, 1:45 p.m.: An organized gang of package burglars has been hitting Village buildings amid the pandemic — at least so says a local resident who claims she recently caught the crew in the act.

The woman posted her report on the Nextdoor app last week and residents have been buzzing about it.

She used her name in her posts on Nextdoor, which only allows residents who register for the app to view its contents — and only for their own specific neighborhood.

However, she requested anonymity in The Village Sun.

A five-year resident of the Village, she works at home.

As she tells it, last Tuesday, April 14, around noon, she was walking her dog when she spotted a guy with a big backpack “looking around” at W. Fourth and Perry Sts. His behavior made her suspicious and she tailed him until he made a left onto Bleecker St., where he disappeared.

But when she turned the corner, she noticed a large SUV standing outside a building on Bleecker between 11th and Perry Sts., which had its door propped open.

Similarly, they all had large backpacks, and it appeared they had a for-hire driver, who was middle-aged, who was opening the vehicle’s trunk, she said.

Concerned, she started to snap photos, at which they angrily protested, she said.

Asked if she actually saw anyone remove anything from the address, she said, “I don’t know that I saw anybody going in [the building]. They had the door open. It seemed like they were waiting for people to come out.”

Continuing to recount her story, the woman said she retreated and quickly found a police patrol car a few blocks away at Bank and W. Fourth Sts. She showed the female officer a photo she took of the SUV’s license plate. The Village resident didn’t stick around to see what the officer might have found out when she responded to the complaint.

“I figured she wouldn’t get there in time, that they would be gone,” she said.

The concerned resident then dropped her dog off at her apartment and went to the Sixth Precinct on W. 10th St. to file a complaint. But she said she was greeted by an officer who was manning the door in this time of coronavirus.

She said the cop told her she should have called 9-1-1 and that because she was not a victim of a crime, she could not file a complaint.

She then claimed she saw another incident the very next day.

“I was walking the dog,” she said. “I saw it happening again.”

Basically, as she tells it, she saw a guy who was hanging out on Charles St. slip into a building behind a FedEx worker making a delivery.

She did not wait around to see if police actually responded to the scene.

Through a friend, the woman eventually got in touch with Joseph Corcoran, the precinct’s field intelligence sergeant, who assured her that police would work with local supers to make sure their buildings’ security cameras were up and running. He explained that — even if the images don’t ID the potential crooks — working in conjunction with street cameras, the building cameras help “create a larger story” about their movements through the neighborhood.

“They’re going to be very proactive about this,” she said, adding the sergeant’s words reassured her.

Speaking last Thursday, Robert Jackson, a Sixth Precinct community affairs officer, told The Village Sun there were no complaints filed for package thefts — which would be classified as burglaries — last Wednesday for the Bleecker St. address the woman cited.

The woman said Sergeant Corcoran also told her there were no complaints filed for that address on that date.

Again, the resident asked that The Village Sun not print that address, either.

She speculated there may be several reasons why locals may not be calling police about package thefts right now.

First, most people get their packages from Amazon nowadays, and it’s easy to have the online giant replace them if they’re stolen.

Also, she said, New Yorkers don’t want to burden the police now, knowing they are under pressure due to the pandemic, which has so many officers out sick.

In addition, she said, people simply don’t want to take the time to fill out a police complaint.

Finally, locals will likely just report package thefts to their super before going to the police, she offered.

As for why the woman does not want her name published, she said it’s partly because she’s “already getting blowback” from people who charge she is targeting black males; all the individuals she suspected of being package thieves were black.

The woman also contacted the Taxi and Limousine Commission and sent them the photo of the SUV’s license plate. She said The Village Sun could run a photo she took of the driver standing next to the vehicle — but only if the license plate was cropped or blurred out. The Village Sun is choosing not to run the photo.

Again, she said, while she was comfortable using her name on Nextdoor — which is a “closed community” — she was not O.K. doing so in The Village Sun, since this newspaper’s Web site is publicly searchable. In addition to worrying about being branded a racist, she also fears potential retaliation by the alleged criminals.

Beyond these two specific alleged incidents, though, the woman and police agree that package theft has been an ongoing problem in the Village, where there are many non-doorman buildings. Her own building has 30 units, but no doorman.

Yet, she noted, residents are reluctant to get involved — due to both racial sensitivities and safety — if they see a stranger seemingly loitering outside a residence.

“In this day and age, no one wants to be wrong,” she said, adding, “and the person could be violent, too. They could pull out a knife.”

The streets are obviously nearly deserted right now, but this works both ways, in her view.

“You have a lot of people who fled to the Catskills, the Hamptons, whatever,” she said. “But, on the plus side, the streets are empty, so these guys are more evident.”

She noted that a package of her own was stolen last Monday — the day right before she saw what she felt to be the suspicious S.U.V.

She also recently posted a notice in her building lobby saying, “the package stealing has gotten bad,” and asking fellow tenants to contact her if it has happened to them.

In a follow-up e-mail to this paper, however, the woman momentarily doubted her own suspicion that the individuals she observed last week were actually thieves.

“I had this side thought,” she wrote, “what if they weren’t stealing packages, what if they’re all dispersing to deliver drugs?”

But, on second thought, she quickly discounted that theory.

“Probably not,” she said, “makes no sense because it’s more conspicuous and why would they need some huge vehicle?”

The main thing is to raise awareness of and curb package theft, which is “rampant,” she stressed.

“For me that’s the highest value of journalism — to get pressure on an issue,” she said.

Jackson, of Sixth Precinct Community Affairs, acknowledged, “We do have a lot of package theft in the Village.”

At the same time, he noted, all sorts of delivery people are out there right now — some with company insignias, some without — because deliveries are booming while everyone is self-isolating at home.

“We have Amazon, people who work for Amazon,” he said. “We have people going around in vans dropping things off.”

As for the idea of a coordinated crew of package pilferers cruising around the Village, he said, “I can’t verify this at all. I never heard of them coming out of a van to do it.”

Also, he noted, since people are mostly at home now, they should be able to retrieve their packages quickly.

More to the point, he said, “She should have called 9-1-1 right away, so we could investigate it. She should be reporting any suspicious activity to the police as it’s happening. You know — ‘See something, say something.’”

Jackson said one local news photographer, in fact, recently called the precinct to report what she thought were packages being stolen from a drop-off point. Police responded — but determined the individuals were legitimately making deliveries.

Field Intelligence Sergeant Corcoran confirmed to The Village Sun that he had been in contact with the woman, but didn’t offer further details.

“I can only comment that we are aware of the complaint and are investigating,” he said.

Year to date, through April 12, reported burglaries in the Sixth Precinct increased by 133 percent, from 36 last year to 84 this year.

Over the past month, reported burglaries in the Sixth were up 138 percent, 19 compared to 8 during the same period last year.

For the week covering April 6-12, burglary complaints in the Village rose from 1 last year to 4 this year.

Overall crime was down 27.5 percent in the Village precinct this past month — mainly due to a drop in grand larcenies (thefts of more than $1,000) from 57 last year to 23 over the same period this year. Year to date, though, overall crime in the Sixth is up 25 percent.