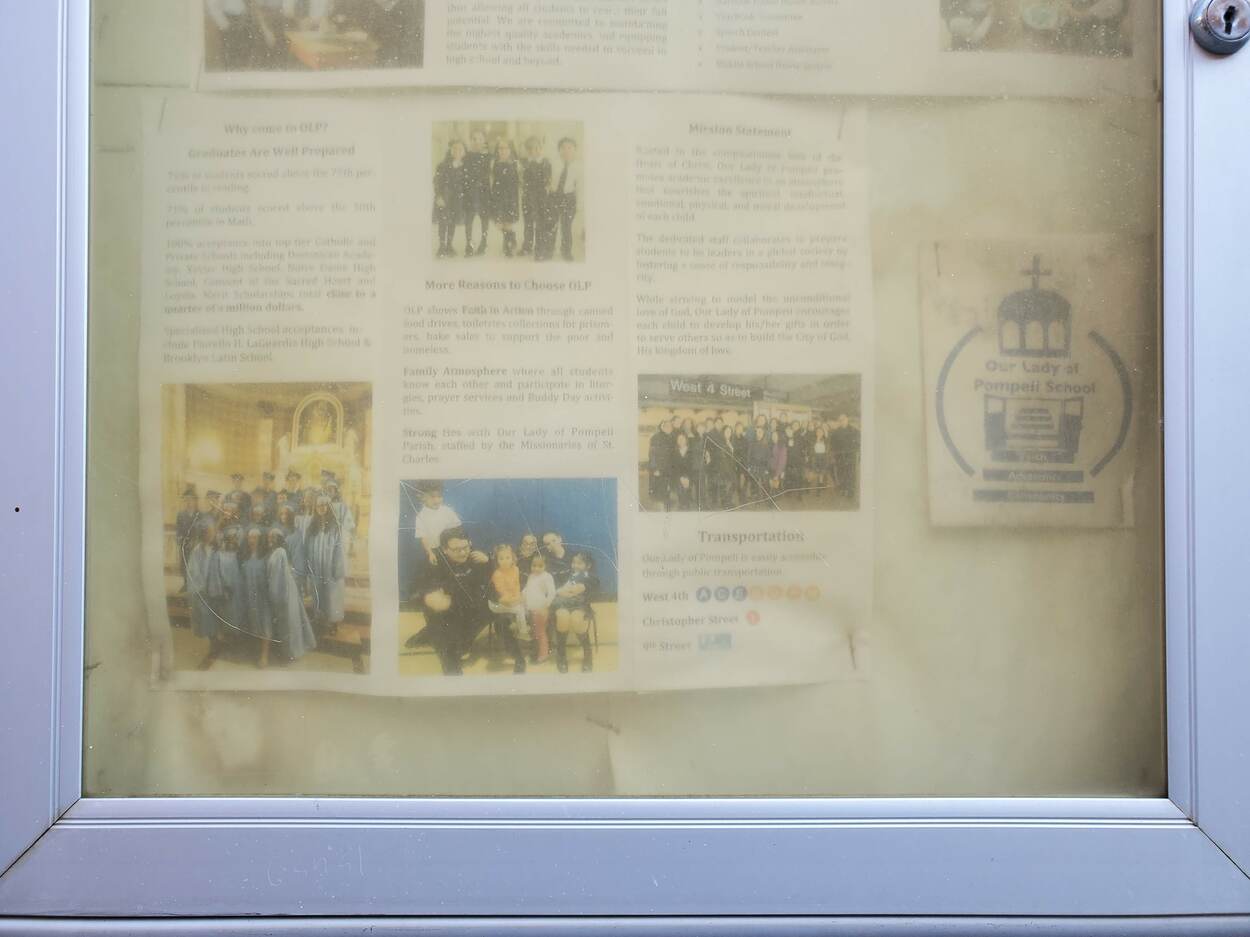 A message board on Leroy Street outside the former Our Lady of Pompeii School building. (Photo by The Village Sun)

OAKS TRANSPLANT: Great Oaks Charter School of New York City, currently at 38 Delancey St., will be moving into the former Our Lady of Pompeii School building, at 240 Bleecker St. Great Oaks has signed a 30-year lease and will invest $5 million in building improvements. The parish school closed in August 2020 in the wake of the pandemic. The lease was conducted with the Archdiocese of New York.

The six-story Greenwich Village building sports a gym, which Great Oaks has lacked since being chartered by the New York State Department of Education in 2012. The Bleecker site is also just a few blocks from New York University, which has been a longtime partner to Great Oaks and its teacher-residency program.

“We look forward to welcoming the Great Oaks students and families into our community, particularly those who may be new to this country or don’t speak English as their native language,” said Father Angelo Plodari of Our Lady of Pompeii.

WIKI WHAT?! Can’t a guy get a break — or even a simple Wikipedia page? John Penley, the former East Village activist, lately of Vegas, has been trying his darnedest to get Wikipedia to approve a page for him. He even got someone to help him write up and organize the content for it. But in June, Wikipedia slapped him down, leaving the former “slacktivist” puzzled and pissed off.

“This submission’s references do not show that the subject qualifies for a Wikipedia article,” the rejection note sniffed. “That is, they do not show significant coverage (not just passing mentions) about the subject in published, reliable, secondary sources that are independent of the subject.”

Penley has photographed all sorts of intense news situations, from Klan cross burnings down south to, more recently, clashes between antifa and alt-right goons in Charlottesville. He’s organized a ton of protests, including at national political conventions. He practically invented the slogan “Die yuppie scum!” Thanks to Penley’s tip, The Village Sun in May broke the story of the whacky new AntifaWatch site. Meanwhile, he’s been having health issues, and can’t even get proper pain medication from the V.A. Hospital. Give the man his page already!

QUEST SPUD: We’ve been trying to figure out what’s going on with that mysterious platform we’ve seen out in the middle of the East River off of Stuyvesant Town. A spokesperson for the city’s Department of Design and Construction only told us it’s not part of the East Side Coastal Resiliency project, but that didn’t tell us what it actually is.

Some East River Park activists speculate the “unidentified floating object,” as former Councilmember Kathryn Freed put it, might be working on sewage pipes that connect from the Lower East Side to the Newtown Creek Wastewater Treatment Plant in Queens. It also moves around: Readers have been giving us updates on its travels all over the river.

We a sent a photo of the seaborne structure to Tom Fox, the Hudson River Park activist who founded New York Water Taxi, and asked him what it was. He informed us it’s a “spud barge.”

“They’re generally used for construction and the yellow crane on the deck would indicate that’s what this one is used for,” Fox said. “It could be used for pipeline work Or for bulkhead repair or any real in-water construction job. Given where it sits, it’s not along the shore, so your pipeline guess is interesting and could be relevant.

“The aft end of the barge looks like it’s self-propelled, so it doesn’t need to be dragged around by a tug and it’s shallow draft allows it to get into low water situations.”

Looking for more specific info about just what this thing is doing out there, we called the local Coast Guard base on Staten Island. A lieutenant there said she would forward our question to the Waterways Management Division, but we haven’t heard back yet. Maybe it’s time to call Homeland Security.