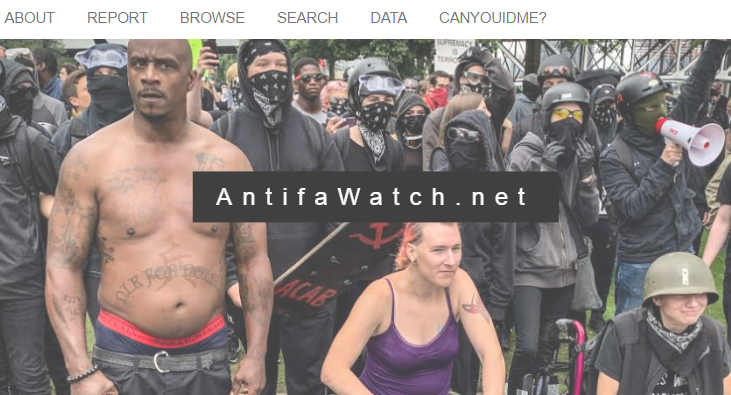 A new, allegedly open-source Web site, AntifaWatch, is like a right-wing-created Wikipedia "rogues gallery" that lists members of Antifa and Black Lives Matter, as well as anarchists, communists and other activists and protesters that the site and its contributors deem to be far-left.

BY LINCOLN ANDERSON | Like some sort of gonzo mash-up of Wikipedia, Vice magazine and Breitbart News, a new Web site aims to “log and track Antifa and the Far Left.”

Along the way, the site, AntifaWatch.net, is also snarky, rude, crude and homophobic. A sort of catch-all, it casts a wide net, lumping together self-identified anti-fascists along with others on the left — from Public Advocate Jumaane Williams and David “Shaman” Ortiz, the party promoter who threw wild, late-night raves and boxing matches in Washington Square Park last summer, to local leaders of Black Lives Matter.

The site lists the name, state of residence and “approx. age” of each person, followed by “notes,” basically a short bio with highlights of the person’s protest history and arrest record. For some people’s entries, the only thing posted are arrest records.

There are, in fact, a lot of New Yorkers listed on the site, ranging from the likes of Williams and Ortiz, mentioned above, to socialist Councilmember Kristin Richardson Johnson, a Brooklyn math teacher fired for suggesting in an Instagram post that cars plow into a crowd of police as “reciprocity” and even an Arabic guy chucking eggs off a pedestrian bridge at Jews for Trump cars. All the individuals shown in this article live in New York, other than John Penley, who formerly lived there and who tipped off The Village Sun about AntifaWatch.

Penley, a transplanted East Village activist photographer and news junkie now living in Las Vegas, found out about AntifaWatch — and was surprised to find he was listed on it — a few weeks ago while doing his regular weekly search for his name on the Web.

“I’m happy they put me on there,” he declared. “I should be on there. The only thing I don’t like is they put in where I live.”

The site unsettlingly notes he resides in “an apartment in Vegas,” though does not give his exact address.

“I am a nonviolent Antifa activist and I use my photos to do my fighting,” Penley said, proudly.

“A lot of the people on the list are part of Occupy Wall Street,” he noted.

AntifaWatch says it uses “arrest records, social media and other legal open resources” to compile its entries on individuals. Entries often have multiple photos of the subjects.

John Rhodes Penley (DOB: 05/03/52) attended the Charlottesville Unite the Right counter-protest. He’s described as a former East Village (NYC) activist and anarcho photo-journalist. He was quoted in an interview as saying, “I got run over by a herd of f—ing Nazis,” he said, “and I got a big cut on my knee. And I got teargassed and pepper-sprayed a bit.” He did admit the violence was encouraged by Antifa members. He previously protested the 2016 Republican convention in Cleveland. Penley grew up in Asheville, North Carolina, a hotbed of radicalism, but was a New York resident at the time of Unite the Right. He moved back to Asheville after the rally but his sister evicted him from the family house and he moved to an apartment in Vegas in 2020.

The longtime activist actually is impressed by the new site, in terms of the amount of work that’s clearly being put into it.

“They went to the trouble of putting all the pictures of us up,” he said. “It’s a great collage. I bet it’s funded by Steve Bannon or maybe Alex Jones. Maybe Nazis. It’s got to have some money behind it, it’s so professional. Someone collected all this information. No one on the left is doing any of this.”

At the same time, AntifaWatch is often sophomoric, making homophobic wisecracks about some activists, while playing fast and loose in terms of speculating if others might be gay based on scanty “evidence.”

In Penley’s case, in one of the photos AntifaWatch found of him being arrested he was wearing an ACT UP T-shirt, leading the site to insinuate that he might be gay.

“Penley was active in Occupy Wall Street in the early 2010s and probably in the AIDS movement in the ’80s,” the site says.

“It was an anti-nuclear weapons protest at the Savannah River site in South Carolina not a gay protest,” the activist explained to The Village Sun. “They just assume from that T-shirt. That’s the one that got me really pissed off. They’re homophobic. I just happened to be wearing an ACT UP T-shirt.”

In addition, Penley, in the article that AntifaWatch quoted (which was written by this writer) about the Charlottesville clash, actually said that both sides — Antifa and the alt-right — came looking to rumble, though AntifaWatch says that Penley only said “the violence was encouraged by Antifa members.”

“The Web site is troubling for a lot of reasons,” Siegel said, “but people have a First Amendment right to create something like this. But they need to be careful about the statements about individuals. If they knew it was inaccurate, it could create possible defamation claims.”

Siegel said while he’s not a “First Amendment absolutist,” he feels people can use “the N word or the F word for L.G.B.T.,” though added, “I don’t advise it.”

“Speech has to be protected,” he asserted.

However, if statements on AntifaWatch about people can be shown to have caused a “loss or reputation,” then that potentially can be liable, he said, adding that, with Web sites and social media being involved, “things could be amplified.”

Plus, the veteran civil-rights attorney added, “The real standard is not if you’re arrested. It’s if you’re convicted, and not even if you’re indicted. There are many arrests that turn out to be false arrests, especially when you’re talking about political activism.”

In short, Siegel said, “The creators have a right to create this kind of site. But the creators, the workers have a responsbility to get it right.”

Coincidentally, Penley is currently trying to get a page on Wikipedia about him published and has submitted it for review, but approval takes a while. In the meantime, though, he’d really like to see his AntifaWatch page disappear, along with the entire site.

Penley said that, on top of potentially defaming people, it’s even more concerning that AntifaWatch may be putting people’s lives at risk by publicizing where the individuals live.

“I seriously want to shut ’em down,” he said. “They put a target on my back.”