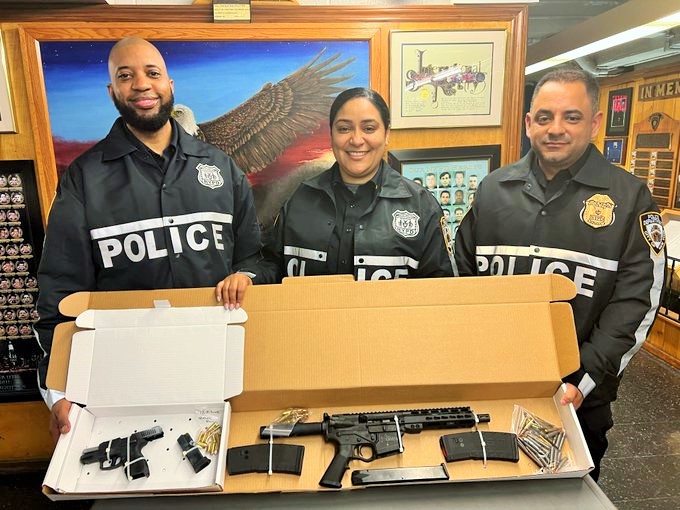 Transit police officers displayed the weapons and ammunition that police say were taken off of Yasmany Lopez when he was arrested in the Grand Street subway station on Sat., May 14. (Courtesy NYPD)

BY LINCOLN ANDERSON | People were relieved to learn that a heavily armed man — packing an AR-15 rifle and ammo clips — who was spotted in the Grand Street subway station in Chinatown last Saturday was arrested.

However, there is no information publicly available so far on exactly what the individual planned to do with his deadly arsenal, which also included a loaded handgun and a total of more than 80 bullets.

A criminal complaint filed by the Manhattan District Attorney’s Office details the charges against Yasmany Lopez, 25 — who police said is from Miami, Florida — yet says nothing about why he was armed in the B/D subway station or what his intentions were. There is no information so far on any statements Lopez may have made. A D.A. spokesperson said they can’t say more on these points right now because it’s an “ongoing case.”

According to the spokesperson, the prosecution recommended bail for Lopez be set at $100,000. However, the judge granted bail at $25,000. The spokesperson did not respond when queried if Lopez is still being detained. Lopez is not listed in the Department of Correction database, either.

But a source familiar with the New York City criminal justice system told The Village Sun he thinks the defendant likely is, in fact, being held somewhere. Lopez’s next court date is scheduled for Fri., May 20.

The D.A.’s criminal complaint includes a statement by a Transit District 4 police officer who arrested Lopez on Sat., May 14, at 11 a.m. in the Grand St. subway station at Chrystie Street. Police said someone had alerted police about a “suspicious individual” in the station.

“I took a rifle carrying case from the defendant and observed a black AR-15 pistol rifle inside the case,” the Transit officer testified. “I observed that the pistol rifle had the ability to accept a detachable magazine, the capacity to accept a magazine that attaches to the pistol outside of the pistol grip, and a guard rail to allow a person to hold the barrel without being burned. I further observed approximately 30 loose [bullet] cartridges for the pistol rifle inside the case, as well as a 30-capacity magazine containing 17 live cartridges and a second 30-capacity magazine containing 22 live cartridges. I further observed an empty, extended 9-mm magazine with 32-round capacity.

“I also took a black Taurus 9-mm handgun from the defendant’s left jacket pocket,” the Transit cop said. “I am informed by [an officer from] the Evidence Collection Team, that he removed the magazine from the handgun and he observed that it was a 12-capacity magazine containing 12 live cartridges.”

Lopez was hit with multiple charges, including nine for criminal possession of a weapon, plus three counts of unlawful possession of certain ammunition-feeding devices within the home as a second offense.