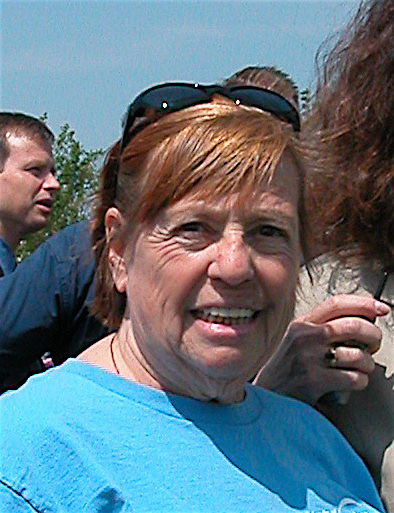 Ross Graham at the opening of the renovated Pier 45 a.k.a. the Christopher St. Pier in 2003. It was among the first of the Lower West Side's run-down piers to be rehabbed for the Hudson River Park. (Photo by Tom Fox)

BY THE VILLAGE SUN | Updated Jan. 29, 2:40 p.m.: Ross Graham, who played a key role in the creation and growth of the Hudson River Park, died on Wednesday. She was 93.

According to Tom Fox, a longtime fellow waterfront park activist, Graham fell about a month ago and broke a hip. While she was in the hospital being treated and recovering, she contracted COVID.

Fox said he had spoken to Graham right before Christmas and she seemed fine then.

Graham was the chief of staff to former West Side state Senator Manfred Ohrenstein in 1975 when he became the Senate minority leader. She worked for him for 31 years.

In 1996, Graham was appointed to the board of directors of the Hudson River Park Conservancy. In 1998, the conservancy gave way to the current Hudson River Park Trust, which was created to build and operate the 4-mile-long riverfront park.

Graham was also a co-founder of Friends of Hudson River Park, a group that started out as a watchdog for the new park. Along with high-powered developer Douglas Durst, she was co-chairperson of the Friends from 2002 to 2011.

“She was a force on the West Side,” said Fox, who was the Hudson River Park Conservancy’s first president.

Ross Graham grew up in Massachusetts and Pennsylvania, the daughter of two teachers.

A 1995 New York Times article, “The Art of the Neighborhood Deal,” by Terry Pristin, profiled Graham and C.B. 4, focusing on how the board dealt with major issues like high-rise development and privatization of public space.

According to the article, Graham graduated from Tufts University, after which she became a reporter for the The Reading Times in Pennsylvania. She went on to work in publicity and trade journalism.

Inspired by John F. Kennedy, Graham joined the Chelsea Reform Democratic Club, where she met Ohrenstein, joining his staff as an aide in 1964. Rising to become his chief of staff, she worked for him until she retired in 1985.

“Ross literally was the first woman to be a major staffer in Albany,” Ohrenstein said in the Times article.

In her sole run for elected office, Graham briefly campaigned for Assembly against Richard Gottfried in 1972 before withdrawing. There were far fewer women holding elected office back then. Gottfried, today the Legislature’s longest-serving member, had first been elected only two years earlier.

During her time in politics, as well as afterward, Graham was a major advocate for abortion rights. Another cause of hers was working to get more women elected to political office. She also fought to repeal the state’s harsh Rockefeller Drug Laws.

But her greatest passion was the Hudson River Park.

“I first met Ross in the 1970s in the fight against Westway,” developer Douglas Durst said in a statement to The Village Sun. “She was an indefatigable advocate of Hudson River Park, and much of the beautiful park that has been built today was the result of her efforts. I enjoyed chairing Friends of Hudson River Park with her; she was diplomatic, forceful, charming, thoughtful and a quintessential New Yorker. I will miss her.”

Fox said Graham and Durst “worked very well together” as co-chairpersons of the Friends. During their tenure, the Friends successfully sued the city to force the Department of Sanitation’s garbage trucks off of both Pier 97, at W. 57th St., and Gansevoort Peninsula, just south of 14th St., so that parks could be built at those locations. The Friends also litigated to get the W. 30th St. heliport out of Hudson River Park. However, the Trust later got the state Legislature to modify the Hudson River Park Act to allow the heliport to stay.

The Friends has since dropped its watchdog role and now works more hand in hand with the Trust, doing fundraising for and promoting the park.

A.J. Pietrantone was the Friends’ executive director from 2008 to 2013, overlapping with Graham’s tenure there as co-chairperson.

“She was a really committed, focused leader and, I would say, a populist, in terms of the park and really wanting to have it be popular and enjoyable to everyone,” he said. “She would be on the bus telling everyone about the park. She was so proud of it. She didn’t want anybody to not be able to enjoy it. She was just really concerned about having a variety of activities, so there would be something for everybody in the park.”

Pietrantone said Graham was personally very excited about the opening of Pier 62, which sports a carousel and skateboard park, at the north end of Chelsea Piers, since it was in her neighborhood.

Perhaps Graham and Durst were fated to be in sync on the park since, as Pietrantone noted, they share the same birthday, Dec. 19.

“She ran the Friends meetings, Douglas was more of a fundraiser,” he said.

Graham’s deep experience in Albany politics was a huge plus for her park work, Pietrantone noted.

The ’95 Times article detailed how Graham was adept at compromise, allowing contentious projects in C.B. 4 to go forward but only after extracting deep concessions for them from city agencies and private entities.

For example, the article noted, C.B. 4 ultimately allowed “Pomp, Duck & Circumstance,” a fancy dinner-and-circus show in a big white tent, to take over DeWitt Clinton Field for seven months, but only after the Parks Department agreed to spruce up the run-down diamond.

The waterfront became a major issue during Graham’s tenure at C.B. 4. For example, there were vigorous debates about whether “view corridors” to the river would be kept open at a planned project called Chelsea Piers. Ultimately, they weren’t, as the water was blocked off by the several-blocks-long wall of a massive pier shed. The compromise was that Chelsea Piers had to provide public access around the piers and leave most of Pier 62 free of sports and open for more passive recreational use.

Graham lived on 18th St. in Chelsea in a one-bedroom apartment she had been in since 1966.

“Small apartment,” Fox said. “She was not a lady of wealth and privilege, for sure, but a lady of tenacity and stick-to-itiveness, I thought.”

“She would have a big open house there — always a lot of people showed up for that — at the little apartment in Chelsea,” Pietrantone recalled.

Graham became good friends with Noreen Doyle, the Hudson River Park Trust’s senior executive vice president, and Pam Frederick, a Trust board member. Pietrantone said she was also close to a niece, who spent a lot of time with her. Another close friend was Anna Lou Pickett, with whom she used to rent a house on Shelter Island; fittingly, for the politico Graham, it formerly belonged to Governor Hugh Carey.

Pietrantone said what attracted Graham to come to New York City was the theater and writing.

“She was really interested in the theater and she was a writer,” he noted. “I think that was the draw. She went to the theater regularly.

“She was basically a civil-rights-focused person, a populist,” Pietrantone said. “She volunteered at a lot of nonprofits. She was a big volunteer at Citizens Union. She was committed to the city and to public life and the citizen’s role in public life — which is why, I think, the community board and getting involved with the park was a convergence of all her values. She had a very full life.”

The Times profile painted her as a bit of a fashion plate.

“In the often-scruffy world of community activism, the auburn-haired Ms. Graham stands out in her silk blouses and sling-back heels,” the article said.

But Fox remembers Graham as the real deal, a no-nonsense fighter for her community and the Hudson River Park.

“She used to walk down to Chelsea Piers every day and swim in her 80s,” he recalled. “She was a damn fine lady, and the world is diminished with her passing.”

Ross Graham was predeceased by a brother, David Scott Graham, a few years ago. She is survived by her sister, Judy Graham Miller, of Florida.