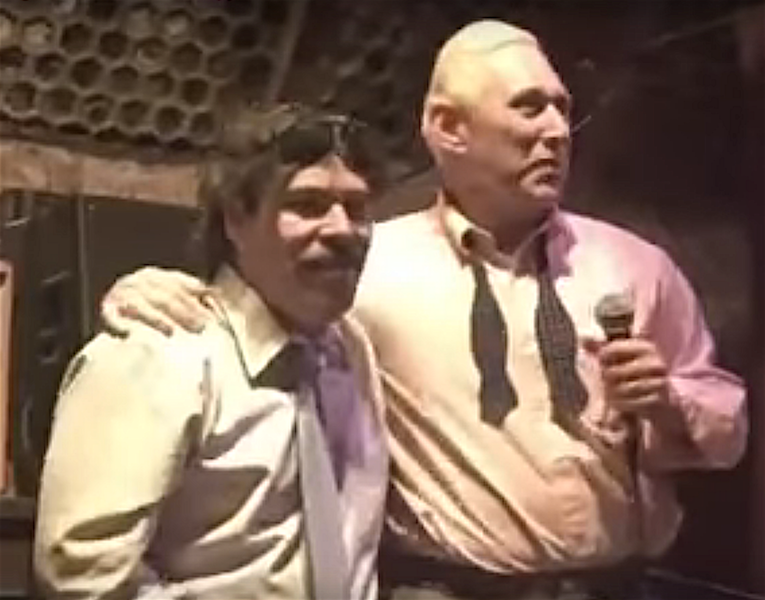 Randy Credico, left, and Roger Stone on stage at the former Yippie Cafe, at 9 Bleecker St., in 2008. The two were formerly friends.

BY THE VILLAGE SUN | Last week, this paper first reported that Randy Credico, a comic-turned-Julian Assange advocate, plans to run for mayor.

We subsequently reached out for comment to the man who tried to finger Credico in the Russian collusion investigation involving Assange. That would be Roger Stone, the notorious Republican operative.

Stone, of course, was convicted of multiple charges — including witness tampering involving Credico — in the federal probe into whether the Trump campaign colluded with Russia to affect the 2016 presidential election. Stone claimed to the feds that Credico was his “back channel” to WikiLeaks Publisher Assange. Credico accused his former friend Stone of “throwing him under the bus.”

However, the “G.O.P. dirty trickster” had nothing to say to The Village Sun last week about Credico’s aspiring to the city’s highest elected office.

“I have a firm policy of not commenting on the activities of known crackpots or perjurers,” he replied in a text message.

Since this was two days after Trump-loving lunatics had invaded and defiled the U.S. Capitol, the paper also asked Stone for his views on that day of infamy.

“As you can see from my parlor [sic] feed I denounced the violence at the capital [sic] while it was happening,” he texted.

Parler is the social-media platform that right-wingers have been flocking to after Twitter permanently banned Trump.

In fact, Stone — who was recently pardoned by Trump — is the creator of the Stop the Steal campaign that has dangerously brainwashed so many on the right into believing that the results of the presidential election were a “hoax.” According to a November report by CNN Investigates, Stone launched the misinformation effort during the 2016 election, and it has since been dusted off and taken to a new level by others for this recent election.

Yet Stone is still at it, too. CNN Investigates reported, “Today, StopTheSteal.org redirects to Stone’s personal web page, ‘StoneColdTruth.com,’ where Stone has been posting conspiracy theories about ‘widespread voter fraud.'” (However, the redirect no longer appears to be in effect.)

The article also quoted Ben Decker, a digital investigations expert, saying, “Stop the Steal is a highly coordinated partisan political operation intent on bringing together conspiracy theorists, militias, hate groups and Trump supporters to attack the integrity of our election.”

So, we have Stone to thank, at least in part, for this toxic and treasonous situation where aggrieved Trump supporters refuse to accept that he lost (though without any concrete evidence to the contrary), invade the hallowed U.S. Capitol and, incredibly, even talk openly of armed civil war.