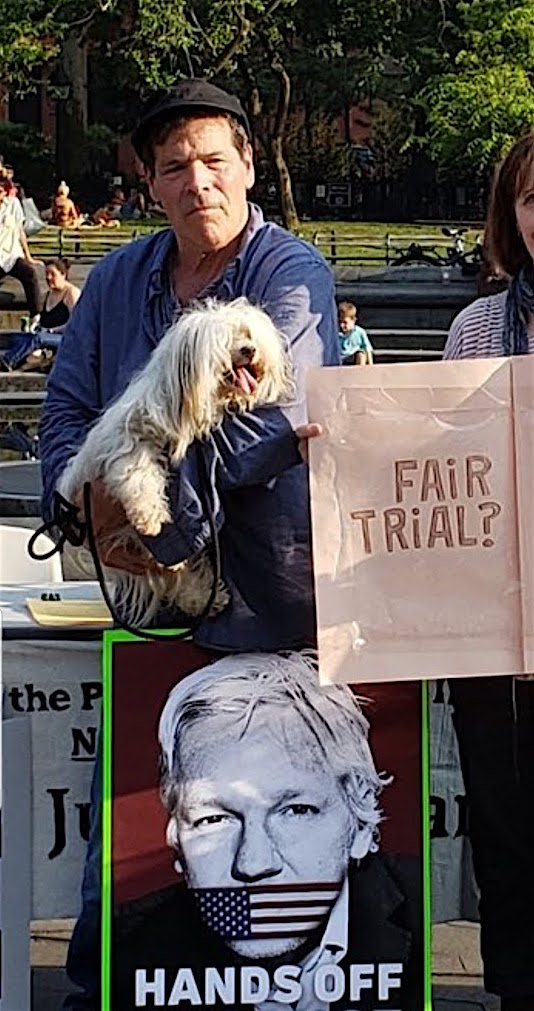 Randy Credico and his therapy dog, Bianca, in Washington Square Park this past summer at a rally for WikiLeaks founder Julian Assange. (Courtesy Randy Credico)

Assange ally Randy Credico aims to shake up, and crack up, mayor’s race

BY LINCOLN ANDERSON | Updated Wed., Jan. 6, 2:20 p.m.: The crowded field of candidates in the New York City mayor’s race is about to get a bit bigger…and more radical…and funnier.

The Village Sun has learned that Randy Credico is planning to toss his hat into the ring. Credico is a former standup comic and impressionist-turned-activist and WBAI radio-show host and journalist. He was also the witness in the witness-tampering charge that Roger Stone was found guilty of, along with six other charges, in the federal probe into whether the Trump campaign colluded with Russia to affect the 2016 election.

“I’m preparing to run for mayor of New York City,” Credico told The Village Sun last week. “I will be jumping in the race in a few weeks. It’s a 99 percent chance that I’m running. AOC is a conservative next to me.”

Simply put, Credico said this mayoral contest is a real snoozer and needs some shaking up.

“You need someone with pizzazz and charisma, and I think I fit that bill,” he said.

The Democratic primary is just six months away yet many New Yorkers don’t even seem to be paying attention.

“It’s like a shiva or a wake, this crowd,” Credico complained of the pack of wannabes. “I feel like it’s a funeral.”

Reminiscent of a celebrity roast, he slung stinging ripostes at some of the frontrunners. He first took aim at New York City’s comptroller.

“Scott Stringer…he’s been in politics for 3,000 f—ing years,” he said. “The only job he had outside of government is going to get candy for Bella Abzug and she’d throw him $5.”

The iconic congresswoman was a cousin of Stringer’s.

With every politician appropriating the progressive label, Credico said it’s forced him to call himself a radical.

“Stringer’s a faux progressive, man,” he said. “I call myself a radical now. He’s a liberal.”

Credico is also no fan of former presidential candidate Andrew Yang, who recently joined the race.

“Andrew Yang…he’s got as much personality as a raisin,” he scoffed.

“I’m going to spend a lot of time slamming those two guys,” he assured, “a f—in’ billionaire and a career politician.”

As for Eric Adams, the Brooklyn borough president, Credico offered, “A nice guy, a career politician. He’s not dynamic enough. He’s a nice guy, but he’s not Cornel West. I would make Cornel West my police commissioner,” he said, referring to the firebrand intellectual.

Credico admitted he is not even familiar with all the candidates in the field.

“Who’s Ray McGuire?” he said, when asked about the Wall St. exec. whose candidacy is being championed by the likes of Spike Lee.

At one point, Max Rose, the recently deposed congressmember from Staten Island, was in the race.

“Max Rose is running?” Credico asked, in disbelief. “Jesus Christ, this is like the worst lineup since the 1962 Mets.”

Rose, in fact, threw in the towel the next day.

Asked about City Council Speaker Corey Johnson, who bowed out of the race earlier, Credico didn’t have too much bad to say, however, and for once was at a loss for zingers.

“I don’t think he has the temperament for it,” he stated. “He’s probably more progressive than the rest of the field. But I’m probably the furthest to the left, easily.”

Speaking of Johnson, Credico said he likes District Leader Arthur Schwartz in the District 3 City Council (Village/Chelsea/Hell’s Kitchen) primary versus Erik Bottcher, Johnson’s chief of staff. Schwartz had to give up his own WBAI radio show when he launched his campaign. If Credico runs for office, he’ll have to do the same. Though, like Schwartz, he admits it will be tough to give up his beloved show.

Last month it was reported that Christine Quinn, the Council speaker before Johnson, is planning a run for the city’s highest office. She ran unsuccessfully for mayor in 2013.

The one candidate Credico does like, perhaps not surprisingly, is a media personality, Maya Wiley, a former counsel to Mayor de Blasio and a talking head on MSNBC, where she is a legal analyst. In fact, he’s actually supporting her, if that makes any sense.

Asked about the current officeholder, Credico accused him of being an imposter.

“The fake Italian,” he mocked. “How many Italians do you know that are seven one?”

“I beat Sal Albanese when I ran for mayor,” he said of the former Brooklyn councilmember. “He was not very happy about that. I got 4 percent in the primary versus [Zephyr] Teachout and [Andrew] Cuomo. I spent like $11 in the primary. I got some T-shirts. This time I don’t need that, I got social media.”

As for his campaign planks, Credico is a strong advocate for defunding the police.

“I would be redirecting the funds into programs that are progressive,” he said. “I would make the police patrol Wall St., make them go after real estate brokers — real crime. And I would not hire any police coming in from outside the city. There’d be no more police coming in from Long Island. And I would take on lunatic Pat Lynch,” he said, referring to the head of the Police Benevolent Association.

Other things he said he supports are free public transportation, a $20 minimum wage and “Medicare for All” in the city.

And, if elected, he pledged he would make New York “a sanctuary city for whistleblowers,” like Assange.

Among his notable past activism, Credico was an outspoken advocate for repealing New York’s harsh Rockefeller Drug Laws.

“I’ve been arrested 11 times, [including during] Occupy Wall St.,” he said, proudly. “I know what the jails look like. I’ve got a civil rights past.”

The Village Sun asked if he has a campaign slogan yet.

“I’m going to be rather brutal and blunt. I’m going to come in and ‘tell it like it is’ — like Howard Cossel,” he said, imitating the late sports announcer’s staccato delivery and catchphrase.

Credico also has some other experience that the rest lack, in his view.

As for Stone, the “G.O.P. dirty trickster,” Trump has now both commuted his sentence and pardoned him. Meanwhile, in the election interference case, Stone had tried to portray Credico as the key “go-between” between himself and Julian Assange, the WikiLeaks founder.

There’s no way, however, Trump would not have pardoned Stone, according to Credico.

During the past five months of the pandemic, Credico was living Upstate near the Catskills. He was doing his podcast and radio show, the last eight segments of which have been titled, “Assange: Countdown to Freedom.” He met with Assange three times in 2017 inside the Ecuadorian embassy in London, where the WikiLeaks publisher had been granted asylum.

Also while Upstate, Credico was recently interviewed extensively by an Emmy Award-winning writer for a new movie on his frenemy Roger Stone.

“He used to write for ‘Seinfeld,'” Credico said, though not revealing the interviewer’s name. “He interviewed me for two weeks, four hours a day, 30 hours of conversation. I got annoyed at the end — it’s 16 years of Roger Stone.”

The formerly hard-living stand-up comic was trying to duck the virus by hunkering down Upstate.

This past Sunday, Credico — who said he is now living in the city again — spoke at a rally outside the British Consulate on Second Ave. to free Assange and block his extradition to the United States to stand trial.

On Monday a British judge denied the extradition request. She based her ruling on concerns that conditions in U.S. federal supermax prisons are not conducive to the mental and physical health of Assange, who has a family history of suicide.

Credico was concerned about his own physical safety at the rally last Sunday. Speaking beforehand, he noted that, while he has lain low since Stone’s case, he also recently has been skewering the far-right Proud Boys on his radio show. This was his first public appearance since the Stone proceedings.

“I’m worried to show up,” he said, “because I think the Proud Boys may show up and strangle me.”

But at least Credico is feeling good about a potential run for mayor. And he thinks this could be his strongest showing yet.