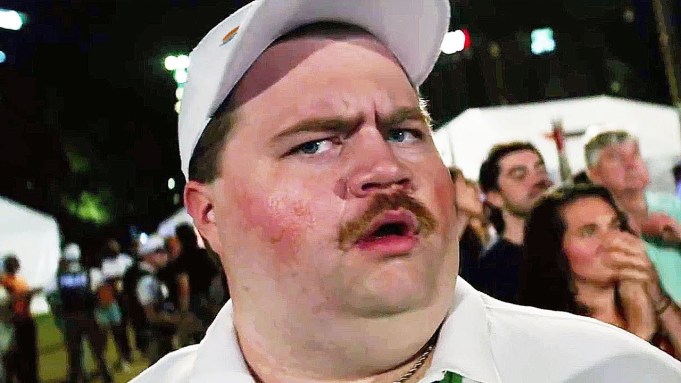 BY ARRIBELLA PELLICANO | Not being an ageist, I won’t mention that the director of the film I just saw is 89. But I will say that Clint Eastwood is one of the finest “actors’ directors” going. And he is still going.

“Richard Jewell” is the true story of a low-level security guy who first spots a suspicious-looking knapsack at the Olympic Centennial Park in Atlanta in 1996. Instead of Jewell being touted as a hero, it isn’t long before the F.B.I. decides that the most likely suspect is the same fellow that Atlanta is touting as a hero.

As played by Paul Walter Hauser, Richard Jewell is a chubby, earnest, law-abiding 33-year-old who keeps being fired for taking his jobs too seriously. He still lives at home with his mom, Bobi, portrayed by the brilliant Kathy Bates.

Through the loose lips of F.B.I. agent Tom Shaw (Jon Hamm) and journalist Kathy Skruggs (Olivia Wilde), Jewell gets front-page exposure with the news that the hero is now under suspicion.

Hamm is so handsome, it’s hard to hate him. But Wilde is unlikeable — her ambitions move the horrors forward.

What happens to this regular Joe and his mother is the stuff of Kafka nightmares as the F.B.I. and press infect his privacy and his dreams with their urgency to solve the crime and sell papers, respectively.

But by some stroke of good fortune, Jewell has made the acquaintance of a rebel lawyer, Watson Bryant (Sam Rockwell). Bryant is made of different stuff, and hates authority figures as much as Jewell respects them. Once he is sure of Jewell’s innocence, Bryant takes on the case with everything his whole life has prepared him for…sticking it to the man.

The performances are all amazing, especially Hauser, Bates and Rockwell. Hauser completely embodies Jewell with all his warts and innocence. At the talkback for the movie at a recent screening, he said he had to lessen Jewell’s accent to be understood. His performance is Oscar worthy.

Bates’s skill with strength and vulnerability is beautifully enacted when she speaks to the public on behalf of her son’s innocence.

And Rockwell appears to hold back his normally insane energy. But it’s all there, underneath, bubbling up just when it’s needed, in the act of defending his client and serving justice.

I like this film because it creates an emotional turnaround. At first, it’s hard to care for a guy who dreams of carrying guns and pushing his power, until his power is taken away by those with real power…and then you’re with him. The F.B.I. doesn’t come off so great. Yet, Richard Jewell still wants to be part of the system he believes in.

The script is by Billy Ray, who co-wrote the screenplay for “The Hunger Games.” I never saw that film, but his script here is tight and moving.

Spike Lee was at the screening. I wish I had been able to tell him how much I thought “BlaKkKlansman” should have won Best Picture instead of having farfalle fall out of my mouth.

Since it’s the season, my second wish is that Clint Eastwood never stops directing.