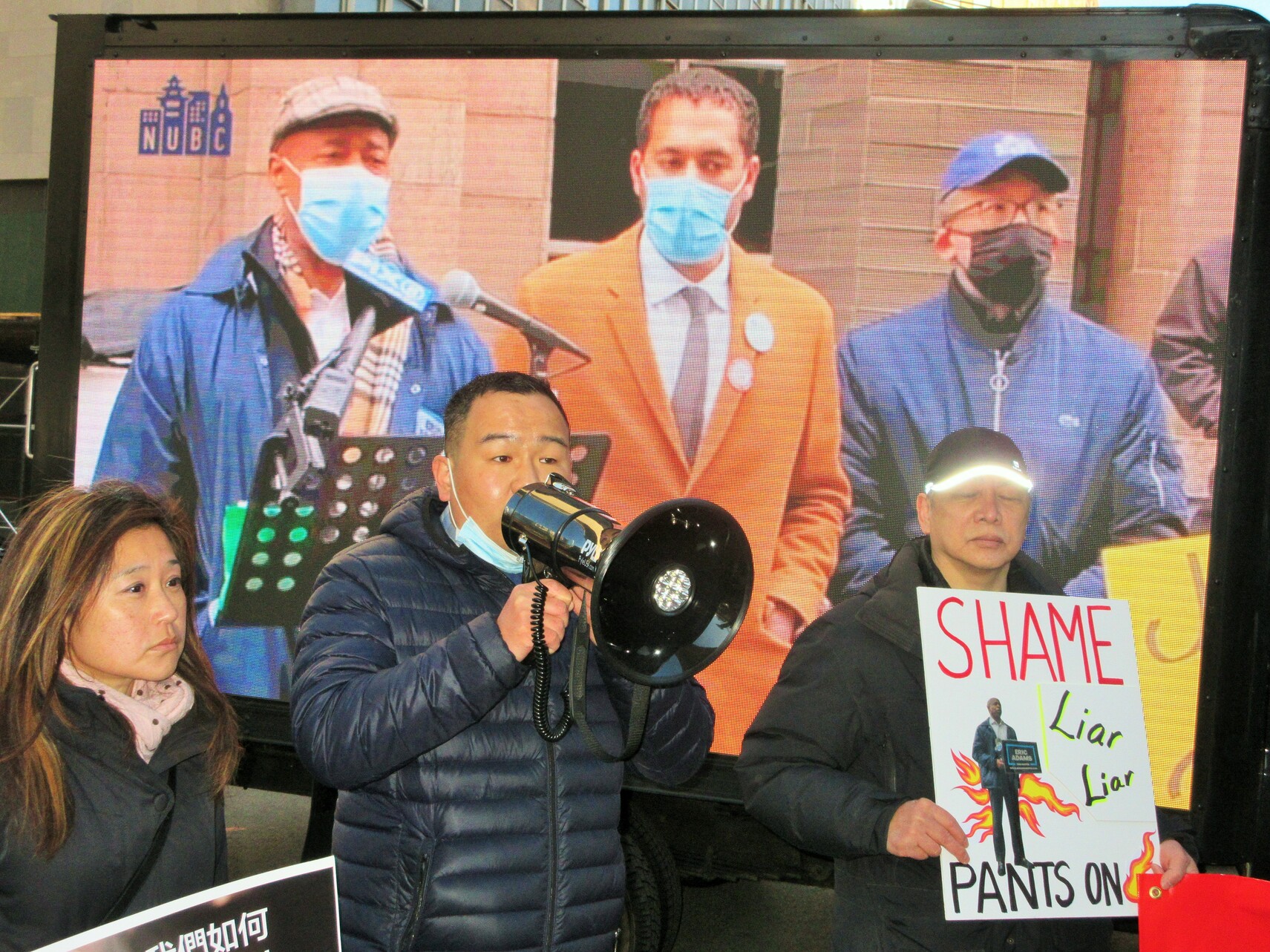 Yubao Dai, an East Broadway insurance agent, spoke at Monday's rally against building a new Chinatown jail. Behind him on a jumbo-size screen on a truck, a video played of Eric Adams pledging while on the campaign trail last year that he would not build any more new jails if elected. (Photo by Dashiell Allen)

BY DASHIELL ALLEN | Armed with posters, megaphones and boxes of Dunkin doughnuts in hand, community members from across Lower Manhattan gathered at the break of dawn on Monday to protest what they thought was going to be the first day of construction at the Manhattan Detention Complex.

They came to protest the city’s borough-based jail plan, which calls for the construction of four new jails in Manhattan, Brooklyn, Queens and the Bronx, in order to close Rikers Island. With a projected height of 335 feet, the future Manhattan jail is referred to by opponents as “the tallest jail in the world.”

According to a community advisory sent out by the Department of Design and Construction, construction fencing had been expected to be installed along Centre Street starting at 7 a.m on April 11.

As it turned out, though, no work took place Monday, which some protesters attributed to their organizing efforts.

“Obviously, you don’t see the construction vans,” said Jan Lee, a co-founder of Neighbors United Below Canal Street, an organization formed in opposition to the construction of a new  more-than-30-story-tall borough-based jail, referred to by its foes as a “megajail.”

“I think we are making a difference right up to this moment,” he said. “We have watched them build jails in Chinatown since 1838. … In Chinatown we have borne witness to 100 years of jail construction.”

Councilmember Christopher Marte, who has held multiple meetings with Mayor Eric Adams’s office, expressed irritation that the new mayor hasn’t lived up to the promises he made while he was campaigning for office, when he attended an anti-jail rally and called the plan institutional “hate” against the Asian-American community.

“It’s been really disappointing,” Marte said. “We’ve presented alternatives to demolishing this jail and building a megajail, and I feel like I haven’t been provided a good explanation of why you can do that.

“They asked us for alternatives, they asked us for support,” Marte continued. “We did our job as a community. We put our minds together, and told them they could renovate this so they don’t have to build this megajail in our community. That we can achieve the goals that the city wants, that this community wants, so we can have a win-win solution. However, they said no. We’re gonna continue to look at every possible legal option available to make sure that this plan doesn’t happen and that they have us at the table to make sure that our plan is the action that they take.”

In a statement, a Mayor’s Office spokesperson told The Village Sun, “This administration will always follow the law, and the law says the jails on Rikers Island must close on time. To follow the law and protect the safety of the community and all involved in this project, this work is proceeding. We have engaged deeply with the community every step of the way, and we are committed to continuing to work with them to limit the disruption of this project.”

Additionally, the city paused demolition of the current Manhattan Detention Complex for more than a month in an effort to engage with the community and review “multiple proposals” that were offered as alternatives, but has deemed all of these “infeasable.” In addition, in the city’s view, renovating the current structure could lead to a “catastrophic collapse” and loss of life.

Alice Blank, co-chair of Community Board, calls on Manhattan’s jails to be renovated and not demolished pic.twitter.com/NOdW7Kk48t

In a letter reviewed by The Village Sun, Peter Samton, the architect responsible for last renovating the Manhattan Detention Complex, more commonly referred to as The Tombs, expressed to Mayor Adams that he believes “a renovation to adapt and reuse the existing complex will be a significantly more cost-effective and environmentally sustainable solution which will help expedite the city’s closing of the jail on Rikers Island in 2027.”

The Adams administration disputes those claims, telling The Village Sun that based on the requirements of laws passed in 2019, renovation of the complex’s existing buildings would be structurally unsound.

Additionally, the city said that the renovations would, based on its calculations, potentially come with an even higher price tag than building a new jail. It could also take just as long, and result in a similar level of environmental impacts, according to the administration.

The 2027 deadline to close Rikers was set previously through a City Council vote.

“Mayor Adams said he would stand by us…but he hasn’t,” said Howard Huie, another co-founder of NUBC. “He owes this community an explanation for his support for the borough-based jails. … He should be a man and let us know, meet with us.”

Alice Blank, vice chairperson of Community Board 1, also called on the city to remodel the existing Lower Manhattan jail facilities.

“We have asked for this alternative to be reviewed for years and we have yet to see this done,” Blank said, adding that the city’s current $8.3 billion plan “does not at all address the sustainability goals of New York City.

“If we need additional space,” she said, “there are plenty of city-owned buildings, including across the street, that could be used for this overflow.”

Also at the protest was retired judge Doris Ling-Cohan, the first Asian American woman judge appointed to the New York State Supreme Court. She called the jail’s construction, “an affront to our community, in times of unprecedented anti-Asian hate, when businesses all over the city and particularly in Chinatown are closing.”

“I don’t understand how the city could miss the compelling reasons why this should not happen,” said Jonathan Hollander, the founder of Battery Dance, a dance company located on Broadway near City Hall.

“The schools desperately need money, and the social services need money. The city should be investing in communities,” he said. “If you don’t change the culture that created Rikers, you haven’t done anything — you’re just moving from one place to another.”

Hollander would like to see Rikers Island rehabilitated and contined to be used as a jail, by constructing “green, modern, airy programmatic spaces,” rather than renovating The Tombs as some, including Councilmember Marte, have suggested.

Not everyone at Monday morning’s jail protest agreed that the borough-based jail plan is a bad idea. A man on parole from Rikers Island, who requested to remain anonymous, told the crowd they don’t know what they’re talking about.

“I’ve been on Rikers Island. It’s a f—ing war zone,” he said. “Putting every borough in one jail. … You guys have never been to jail.”

His perspective is shared by others, including Anna Pastoressa, a criminal justice advocate, whose son was detained on Rikers Island for six years.

“The only reason people oppose the plan is that they don’t like the idea of a jail in the neighborhood, while forgetting that one infamous jail has already been existing near the courts for many decades,” she wrote in a recent Village Sun talking point.

“I would love to see a free New York City with no arrests, no incarcerated people, no cells, no criminal courts, no crime… . Unfortunately, that does not yet exist anywhere on the planet. If you know how to resolve these issues, people, let’s discuss your plan. And please stop the ‘megajail’ nonsense without providing a real solution,” she said.

(Several alternative plans have been suggested by community members, including renovating or modestly expanding the current Centre Street jail facility, along with utilizing other sites across Manhattan that previously were detention centers.)

In a separate op-ed for amNY, Victor Herrera, who spent time in the Manhattan Detention Complex in 1996, said he “can’t wait to see it torn down,” adding that The Tombs lives up to its name.

“There’s no true ventilation in that facility,” he wrote. “It contributes to a build-up of mold — I could feel that my health, and that of the other people held there, was at risk. The only natural light barely creeps in from narrow windows that were installed so that people inside can’t see out of them.”

Next to the protest on Centre Street, a large truck sat parked, covered on two sides by massive screens playing on repeat footage of Mayor Adams at a rally in April 2021, speaking out against building a new jail in Chinatown.

“We’re gonna drive this truck around New York,” Jan Lee said. Adams is going to “see it from his bed, because he has COVID right now.”

Determined to keep up the fight against the jail until the very end, Lee and other activists plan to continue showing up to stop the city from proceeding.