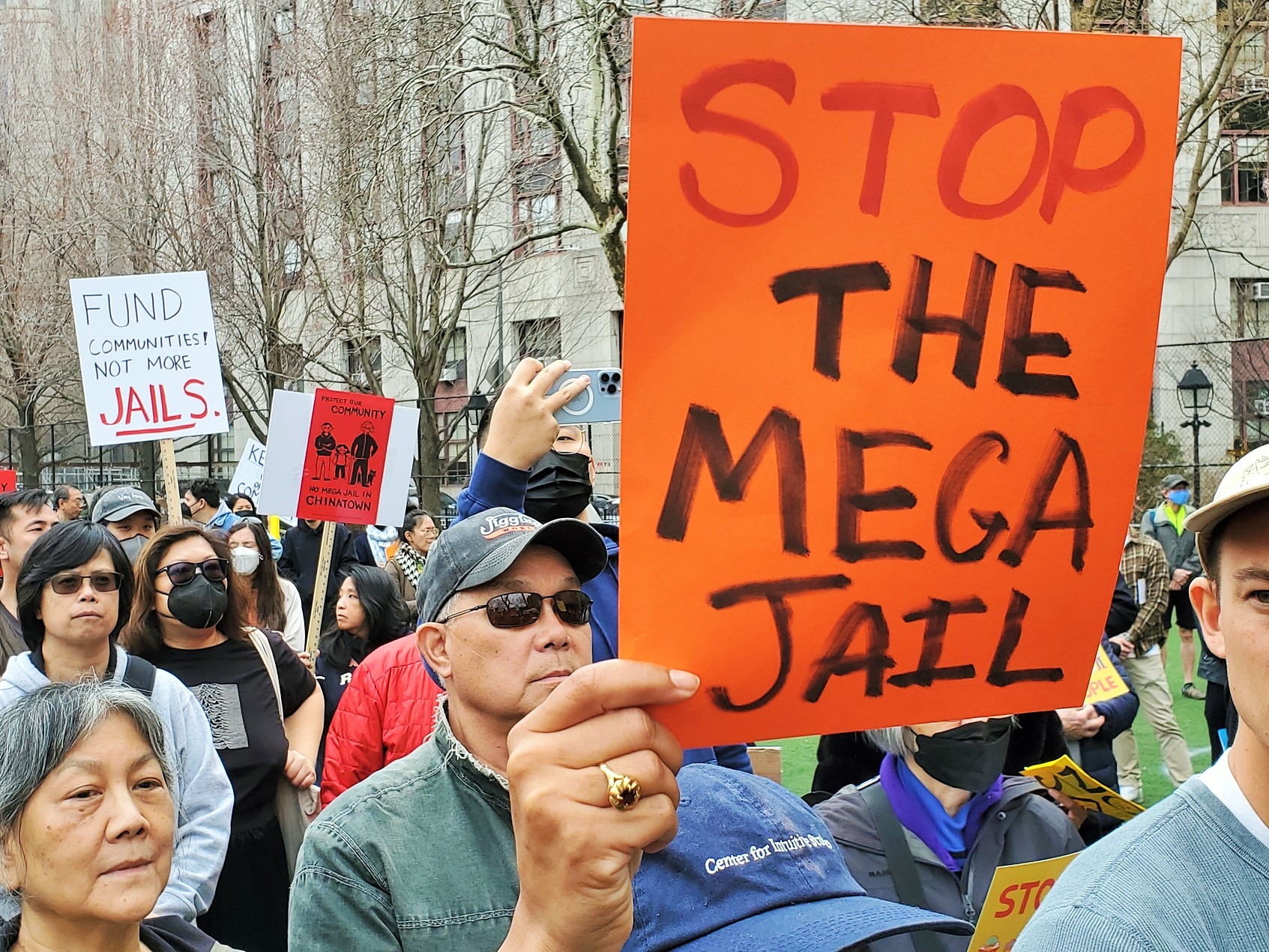 After the march, the crowd gathered to listen to speeches in Columbus Park. (Photo by The Village Sun)

BY LINCOLN ANDERSON | Chanting “Mayor Adams — no new jail!” a flood of hundreds of fired-up protesters marched through the streets of Chinatown on Sunday. They urged Eric Adams to honor the pledge he made so emphatically one year ago.

When Adams was running for election, campaigning for every vote he could get, he stood with activists in the shadow of The Tombs, and vowed, “So I join you today to say: No new jail, no building up a jail at this location.”

“By placing a skyscraper of a correctional institution in this community,” he said, “it is only going to continue to overshadow the voices of the everyday New Yorkers who are in this community… . I know it’s possible to solve the problems we are facing in incarceration, but without the destructions of community.”

A post shared by Neighbors United Below Canal (@nubcnyc)

“If we want to stop the thoughtlessness that goes into what this community has experienced with the recent level of hate crime, let’s stop the institutionalizing of the hate that we’re seeing in government,” he said.

Fast-forward to Adams now in his third month as mayor, yet the demolition of the Manhattan Detention Complex a.k.a. The Tombs remains imminent. The Tombs currently sits empty, its detainees having been moved to the scorned Rikers Island ahead of the existing Manhattan jail’s planned demolition. Former Mayor de Blasio’s contentious plan to close Rikers and replace it with four borough-based jails — which he tried to make sure was set in motion before he left office — seemingly remains in effect.

Sunday’s march started out at Columbus Park, wended through Chinatown, then circled back to the park for an impassioned rally. Police estimated the crowd at 500, which looked about right. But organizers claimed the march picked up more people along the way, swelling to 2,000 people.

Speakers at the rally included Evelyn Yang, the wife of Andrew Yang, the former presidential and New York City mayoral candidate, along with community organizer Jack Liang, plus a steady stream of local politicians, as well as activists who have been battling the Chinatown “megajail” plan for four years now.

“To see our community come through COVID, through hate crimes,” Yang said, “this megajail is the last thing we need. The people who live here will suffer the health impacts during seven years of construction.”

Yang noted with outrage that a senior residence, where elderly people between the ages of 80 and 100 live, “shares a wall” with The Tombs.

“They expected to live out their lives in peace,” she said. “Not if this jail goes up, they will have no peace. They will be displaced.

“This process was predatory and discriminatory and that is violence — and I reject that,” Yang said, defiantly.

She noted that Adams, in his remarks at that very spot a year ago, had called the jail project “institutionalized hate.” Yang challenged him: “Mr. Mayor, now that you are mayor, do you still stand with the Chinatown community? Will you say, ‘No more jail’ and stop the hate?

“I am so tired of politicians’ empty words,” she said, bitterly. “To hell with your platitudes. Every time one of us is hunted and killed, you stand up and say, ‘Stop Asian hate.’ It is time to put action behind your words.”

Yang urged Adams to stand up to the construction unions and YIMBYs who relentlessly push for new building projects at the expense of residents’ quality of life and the city’s livability.

“I know that the construction interests are very strong,” she conceded, “but you need to fight for us and see us. This is your job.”

For their part, though, the jail project’s advocates, including the group Freedom Agenda, slam the “megajail” label as unfair. They note that the new Chinatown jail would have roughly the same number of beds as The Tombs, though would be more spacious inside. But opponents charge that, at 50 stories, the new jail would be the tallest in the world.

Councilmember Christopher Marte, a co-founder of Neighbors United Below Canal Street, a group that formed to fight the new jail project, told the crowd N.U.B.C. plans to file a federal lawsuit soon to stop the project.

“The basis of the lawsuit is institutional racism — what they have done to this community,” he said.

Marte further told The Village Sun that the suit will argue that a new ULURP land-use review should have been performed when the city shifted the location for the new Manhattan jail.

A previous lawsuit by N.U.B.C. filed in state court went down to defeat.

Marte said the $8.8 billion earmarked for the four new jails, one slated for each borough except Staten Island, would be better spent on education, healthcare and housing.

“In just the past week, two people have died on Rikers Island,” the councilmember thundered to the crowd. “That’s not why we went to the polls. We didn’t [vote] to see an investment in incarceration.”

State Senator Brian Kavanagh noted that Adams was “showing signs that he might be open” to reconsidering the jails plan.

“This was something that the previous administration wrought,” Kavanagh said, noting that de Blasio’s goal was “to get this project beyond the point of no return” before he was term-limited out of office.

Jan Lee, another founder of N.U.B.C., said Chinatown has been stepped on for too long.

“Chinatown has lived in the shadow of jails for 100 years,” he fumed. “Every time they tear one down, they build it bigger. Now they want to build the biggest jail in the world. People first! No new jails!

“We are not NIMBY — we’ve had this f—ing thing for 100 years!” Lee stressed later on at the rally’s end. “And every time they fill them with more people.”

Speakers at the rally generally supported, some very passionately, the idea of closing Rikers. But that begs the question of what should then happen with the The Tombs site. Marte, for one, reportedly supports transforming The Tombs into a health facility. One speaker who did a training program at the nearby DCTV noted he had been held in The Tombs in the past. He offered a simple solution: Just move everyone back from Rikers to the vacant Tombs.

“We must close Rikers! We must!” implored Assemblymember Yuh-Line Niou. “The proposed facility here is not the change that people fought for. It is simply ‘tall Rikers’ without the systemic change that we need. Sixteen people died on Rikers last year. The facility being newer doesn’t make systemic problems better.

“We are — communities of color are — across the city are being asked to bear the cost,” Niou said. “This is how systemic racism works.”

District Leader Victoria Lee, the founder of Welcome to Chinatown, noted she had just seen a historic photo of a 1982 protest against a new jail tower that ultimately was added to the then-existing Tombs.

“It said, ‘Build Housing Not Jails,’” she noted of the vintage protest picture. “Why is it that, these decades later, this conversation is still happening?” she demanded to know.

It’s not just Chinatown and Lower Manhattan that are up in arms against the borough-based jails plan, though. Also joining the protest as a featured speaker was Arline Parks, the vice chairperson and C.E.O. of the South Bronx’s Diego Beekman Mutual Housing and a fierce critic of the planned new Bronx jail.

“We are collateral damage to jail reform,” Parks railed.

She said Adams should be true to his word when he pledged to the Chinatown activists, “No new jails.” She warned that politicians who go back on their promises face consequences at the polls.

“We believed him,” she said. “Mayor Adams, you must stand with us today — so that we can stand with you tomorrow.

“This isn’t over!” Parks shouted. “Don’t believe anyone that says this is a done deal.”

Chinatown District Leader Justin Yu, who was around during the 1982 jail protests, noted the local nonprofits that are major Chinatown stakeholders ultimately caved and decided to compromise back then, allowing the project to go forward.

“This time,” he vowed, “we’re going to fight against the city all the way to the end. No more compromise!”

Yu then referred to the string of shocking violence against Asian New Yorkers in recent years, from the killings of Michelle Go and Christina Yuna Lee to random street violence, adding that the upheaval the jail project would cause in the heart of Chinatown would be violence, too.

“Pushing in front of a subway, punching in the face, killing in your own apartment are hate crimes,” he said. “Building a megajail in our community is a hate crime!”

Assembly candidate Grace Lee, a leader in the fight against the Howard Hughes tower at 250 Water St., said, like that Seaport project, the new jail construction would expose locals to a host of toxins, such as asbestos, lead and more.

Victor Papa, a longtime leader at Two Bridges with roots in Little Italy, said Little Italy and Chinatown are firmly united against the new jail tower.

“Little Italy will stand with them till the end against this project,” he promised.

Again, most at the rally supported closing Rikers but not building a new jail at the current Tombs site. It wasn’t exactly clear, though, where people then thought a more humane jail should be sited.

“We are not the people to solve the city’s [jail] location problem,” Jan Lee of N.U.B.C. told The Village Sun afterward. “We can only tell you this is not the place to put this.”

Also attending the rally was former Councilmember Kathryn Freed, who was most recently a judge. She told The Village Sun that while there are no easy answers, in her experience on the bench, about half of the criminal defendants that she saw had “mental problems.” These individuals should get proper healthcare, not be put through the criminal justice system, she said, adding that would also slash the city’s jail population.

“We have a whole class of citizens that are just thrown away on the street,” she explained, “and some of them don’t get dangerous and some do. How many millions did de Blasio give his wife [for Thrive]? Why don’t we take some of that money? You don’t cure mental problems by incarcerating people.”

“Everybody knows that Rikers is a hellhole,” she said. “And now, instead of solving the problem at Rikers, they want to spread it around. So you get a nicer space — but you’re still incarcerated.”

As for that unanswered question, how Staten Island somehow avoided getting a new jail in de Blasio’s plan, Freed noted there are a lot of union city employees living there, which gives the conservative borough political clout.