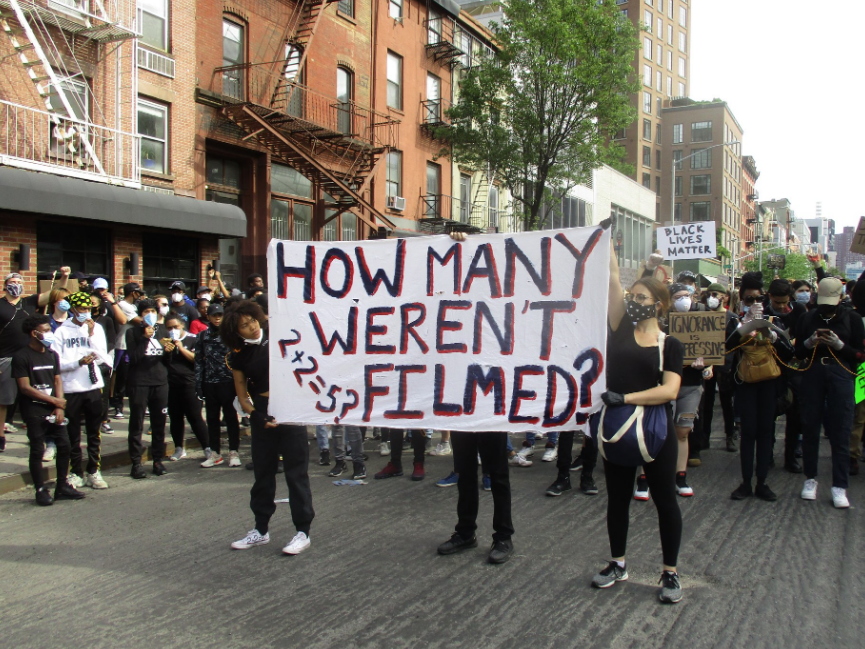 East Village journalist Bill Weinberg covered the protest on the afternoon of Mon., June 1, which started out at Ninth St. and Avenue D, before heading south on Allen St. The demonstrators wound up down by the Brooklyn Bridge, where they occupied the F.D.R. Drive for a while.

The Avenue D location was where Police Officer Francisco Garcia, exactly one month earlier, had made a rough arrest of a local man, Donnie Wright, 33, that was widely reported in the news.

Weinberg also photographed a separate rally on June 2 that saw  demonstrators — most of whom were decked out in black —  march through Cooper Square, then up Third Ave.

He covered that march until it reached E. 26th St., where the protesters sat down in the middle of the street and a standoff with police ensued.

Police had been starting to crack down on social distancing across the city on May 2 when Garcia and other cops were making arrests for it on Avenue D.

Garcia, who had been handcuffing someone else down the street, ordered Wright to back up, then brandished his Taser at him and warned, “Don’t flex.” But, according to police, Wright stepped toward Garcia and “took a fighting stance against the officer,” after which Garcia quickly took him down to the ground and cuffed him.

After an outcry on social media and by local politicians, the officer was stripped of his gun and badge and put on desk duty pending an investigation.

In response to concerns over Wright’s arrest and others around the city for social distancing, the city subsequently said police would no longer enforce the policy, except for large groups.

“The Police Department has a virus — and it’s worse than coronavirus,” one of the speakers declared.